Department of Homeland Security Secretary Kirstjen Nielsen is facing scrutiny amid controversy over the separation of children from their parents at the southern border. As Nielsen, a lawyer and longtime government official, is thrust into the spotlight, many are wondering about her own family and background.

Nielsen, 46, grew up in Florida and now lives in Virginia. Nielsen’s mother, Phyllis Michele Nielsen, died in 2011. Her 76-year-old father, James McHenry Nielsen is still alive and was front and center at her swearing in as DHS secretary. Her parents, both doctors, divorced while she was in college at Georgetown University.

She was born in Colorado Springs, Colorado, and raised in Clearwater in Pinellas County near Tampa. Nielsen has two younger siblings, a brother, Fletcher, and a sister, Ashley.

She has mostly kept her personal and family life private during her years as a government official. Nielsen is not married, as her financial disclosure form does not list a husband or spouse, and she does not have any children. In an odd moment at an April 2018 White House event, a reporter asked if she was getting married. Nielsen was with her chief of staff, Chad Wolf, who is not her boyfriend, and laughed when hearing the question. It is not known if Nielsen is dating anyone.

Here’s what we know about Kirstjen Nielsen’s family and background:

1. Nielsen’s Mother & Her Father Were Both Army Doctors

Kirstjen Nielsen’s parents were both doctors in the U.S. Army, according to an article in the University of Virginia Law School’s alumni magazine. Her father worked as an ophthalmologist, running his own practice in the Tampa area after leaving the Army. It is not clear if her mother, who died in 2011 at the age of 68, continued to practice medicine, nor what her her medical discipline was.

Nielsen’s father and other members of her family joined her in October 2017 as President Donald Trump introduced her as his nominee to head the Department of Homeland Security. She was previously chief of staff to General John Kelly at DHS, and Kelly had recently been moved to the White House to become Trump’s chief of staff.

“She is joined today by her father, James. James — where is James? Stand up, James,” Trump said. “Great father. Her uncle and aunt from North Carolina, Trevor and Mary Ellen Burton, and several other family members and loved ones. Her mother is no longer with us, but, Kirstjen, we know she is looking down on you today and she is incredibly proud.”

Her father was also at her swearing-in ceremony in December 2017:

James Nielsen held the Bible alongside Trump and Vice President Mike Pence as his daughter took the oath of office.

2. She & Her Siblings Grew Up in Florida & Recently Sold Their Mother’s Home to Yankees Owner Hank Steinbrenner for $2 Million

Kristjen Nielsen’s family sits alongside First Lady Melania Trump as Nielsen speaks after being introduced as the nominee to be Director of Homeland Security.

Kirstjen Nielsen and her siblings, Fletcher, 42, and Ashley, 40, were raised in Clearwater, Florida. “Nielsen was born in Colorado Springs but grew up in Tampa, Florida, where she ran cross-country, served as student body president and was a midfielder on a district championship soccer team,” the University of Virginia Law School website says about her. She and her siblings attended Berkeley Prep for high school. Kirstjen graduated in 1990, according to the Tampa Bay Times.

When their mother died in 2011, the Nielsen siblings inherited her home there, but it was in foreclosure, at the time, court records show. Kirstjen Nielsen was the estate’s representative and the case was tied up in Pinellas County court for several years until a settlement was reached in 2016.

In April 2016, Nielsen and her siblings sold the Clearwater property New York Yankees owner Hank Steinbrenner, the son of the late George Steinbrenner, and Hank’s ex-wife, Joan Hartley, for $2,382,000, records show. Steinbrenner and Hartley had the home demolished later that year, according to online records, and the property is currently sitting vacant. 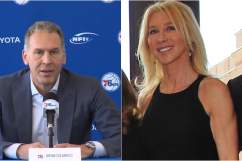 3. Her Paternal Great-Grandparents Came to America From Denmark

GettyUS Vice President Mike Pence (R) administers the oath of office to Homeland Security Secretary Kirstjen Nielsen in the Roosevelt Room of the White House on December 8, 2017 in Washington, DC.

Nielsen’s parents and grandparents were all born in the United States.

Nielsen’s heritage was called into question when she testified before a Senate committee that she is not sure of Norway is a predominately white country. Many assumed, based on her Scandinavian-sounding name, that Nielsen descended from Norwegians, but Nielsen is a Danish surname.

Nielsen had been asked by Senator Patrick Leahy, of Vermont, “Norway is a predominantly white country, isn’t it?” She replied, “I actually don’t know that, sir.”

LEAHY: "Norway is a predominantly white country, isn't it?"

NIELSEN: "I actually don't know that, sir." (via ABC) pic.twitter.com/SMIFgFe7B3

Leahy asked the question during a discussion about President Trump’s comments about immigration at a White House meeting. Trump was reported to have described Haiti and African nations as “shithole countries,” while referring to Norway as a place where more desirable immigrants could come from.

Leahy asked Nielsen why Trump wanted more immigrants from Norway, which is 95 percent white. “I don’t believe he said that specifically,” she replied. “What he was specifically referring to is, the prime minister telling him that the people of Norway work very hard. And so, what he was referencing is, from a merit-based perspective, we’d like to have those with skills who can assimilate and contribute to the United States, moving away from country quotas and to an individual merit-based system.”

4. Her Mother’s Family Is From Italy

Kirstjen Nielsen’s father is seen over her shoulder at her Senate confirmation hearing.

Nielsen’s mother’s side is originally from Italy. It is not clear when here mother’s family moved to America.

Her grandparents, Arthur and Rose Michele, also lived in Florida. Rose Michele was involved in the gardening community in the Tampa area, according to newspaper clippings from the Tampa Bay Times. At one point she was the president of the Clearwater Garden Club.

5. Along With Her Father & Sister, Nielsen’s Aunt, Uncle & Cousin Were at Her Senate Confirmation Hearing to Support Her

Kirstjen Nielsen received the support of many of her family members as she went through the process of being confirmed as the secretary of the Department of Homeland Security. Along with her father and sister, Nielsen’s aunt and uncle, Mary Ellen and Trevor Burton of North Carolina, and her cousin, Andrew Bragg, who lives in Germany, where behind her at her confirmation hearing in November 2017.

During her prepared comments, Nielsen thanked her family for being there and talked about her upbringing.

“I was raised to believe in our country and its founding principles and ideals; to serve our country; and to appreciate and be thankful every day for the freedoms we hold dear as Americans,” she said. “I am beyond grateful for the values they have instilled in me and their unwavering love and support throughout my life. Thank you for your continued encouragement and for traveling so far to be here.” 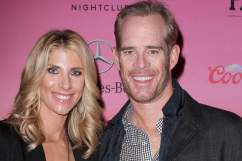 Loading more stories
wpDiscuz
0
0
Would love your thoughts, please comment.x
()
x
| Reply
Kirstjen Nielsen is the Secretary of Homeland Security. Nielsen, 46, is originally from Florida. Here's a look at her family and background.