Facebook Wayne Cheney is an Iowa pig farmer who gave an interview on video about the Mollie Tibbetts disappearance.

Wayne Cheney, an Iowa pig farmer with a history of stalking and harassment arrests, has told the news media that authorities interviewed him about missing college student Mollie Tibbetts.

One of the local television stations – WHO-TV – recorded video of an interview Wayne Cheney gave on Tibbetts. You can watch it here:

On August 21, 2018, multiple news outlets reported that Mollie’s body was found in rural Poweshiek County and that law enforcement had blocked off an area only a few miles from Deep River and Guernsey, Iowa, about 15 miles from Brooklyn, where she lived. You can read more about that report here.

Later in the day, authorities revealed that they have accused a 24-year-old man named Cristhian Rivera of murdering Mollie Tibbetts.

Cristhian Rivera, who is not affiliated with Cheney, was in the country illegally, according to authorities, and working on a dairy farm owned by a Republican official named Craig Lang. Authorities said in a news conference that Rivera allegedly confessed to chasing down Tibbetts as she jogged before abducting and murdering her.

Cheney – who denies having ever met Mollie Tibbetts and who says he has nothing to do with her disappearance – lives in walking distance of pig farms searched by authorities in the disappearance of Tibbetts, the University of Iowa student who vanished in Brooklyn, Iowa, seemingly without a trace.

Authorities have not called Wayne Cheney a suspect. “We continue to look at all possibilities,” said Kevin Winker, of the Iowa Department of Public Safety, on August 3, 2018. “I’m not in a position right now to say we have suspects, we don’t have suspects, persons of interest or anything else.’

On August 5, 2018, the body of a young woman was found in Lee County, Iowa, but authorities said they have no reason to believe it’s Mollie. Searches continue for Mollie, and a reward fund for information leading to her whereabouts now exceeds $260,000.

Cheney told Iowa news media that authorities had questioned him in the Mollie Tibbetts disappearance but he declared it was all a waste of time.

Fox News reported that Cheney “claimed that law enforcement asked him on Thursday to take a polygraph test but he refused to do so.” He was questioned by authorities for the third time on August 5, 2018, Fox reported.
It was later reported, though, that Cheney took a polygraph, but it wasn’t clear what the results were.

Cheney’s past criminal history has fallen under scrutiny in the news media.

Cheney lives in Deep River, Iowa. UK Daily Mail asked Cheney about his previous arrests and he told the British news site, “I was arrested in 2011 for breaching a restraining order. It was an ex girlfriend. That was the only time.” He lives about 15 miles from Brooklyn, Iowa.

Contempt violation of no contact or protective order. Guilty. 2011. Jasper County. He paid a fine.

Another contempt violation of no contact or protective order, but this case in 2014 was dismissed. Marion County.

Stalking, violation of protection order was charged but he was adjudicated of harassment first degree 2009. Guilty. Poweshiek County.

Harassment by personal contact. This case was dismissed. 1996. Poweshiek County.

According to Daily Mail, Cheney is far from the only person police have interviewed; they’ve also spoken to “a suspect in an assault on a female jogger on Sunday while another man was questioned in Pella, an hour from Brooklyn, after he was spotted taking covert photos of girls,” the site says, but police have not identified or revealed any suspect.

Some Clues Have Emerged in the Missing Person’s Case

A person mowing the lawn near the Lincoln Wildfire Reserve found a red shirt, Fox News reported. Authorities have not confirmed this account. Although it’s not clear whether the shirt belonged to Mollie Tibbetts, according to Fox News, employees at the daycare center where she worked wear red shirts.

Then, Fox News reported that a neighbor says she saw a mysterious black SUV in the neighborhood the night that Mollie was last seen. You can read more about that account here: 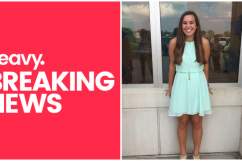 According to Crime Online, Cheney is a pig farmer and his cell phone, garage and home were searched. However, WHO-TV reports that Cheney lives near hog farms without giving his occupation. Cheney, 56, told UK Daily Mail he sold the pig farm facility to Prestage Farms five or six years ago.

Fox News, without naming him, said that FBI investigators had spoken to a local pig farmer and asked to search his residence without a warrant. “They were there for nearly two hours, taking photos of the interior of the home and also searching his garage. He said investigators then asked to interview him off the property and kept his cell phone overnight to check his records,” Fox News reported.

You can read more about the disappearance of Mollie Tibbetts here.