Kellyanne Conway has said that Christine Blasey Ford has a right to be heard before the Senate Judiciary Committee. Ford has accused Supreme Court nominee Brett Kavanaugh of sexual assault. She says the alleged incident occurred while they were in high school. Judge Kavanaugh has strongly denied the allegations.

Conway revealed during an appearance on Fox & Friends on September 17th that President Trump agrees that Ford should have the opportunity to present her claims to the committee. She also stressed that Judge Kavanaugh has the right to address the allegations before the senators as well.

Conway’s statements included: “This woman should not be insulted and she should not be ignored. I think the Senate is headed to a reasonable approach. It seems to me, in speaking to a few senators including Senator Lindsey Graham, that allowing this woman to be heard in sworn testimony, allowing Judge Kavanaugh to be heard in sworn testimony about these specific allegations, would be added to the very considerable mountain of evidence and considerations that folks will have when they weigh whether or not to vote for Judge Kavanaugh to be on the Supreme Court.”

The counselor to the president indicated that President Trump is in agreement on this.

“So let me make very clear. I have spoken to the president, and I’ve spoken with Senator Graham and others. This woman will be heard. I think the Senate Judiciary Committee will decide how and through which forum, in other words will it be by telephone, will it be in person.”

Conway made it a point to praise Judge Kavanaugh.

“Remember to, that has to be weighed against what we already know, which is that Judge Kavanaugh is a man of character and integrity, who has been though six FBI vettings which I can tell you first hand are significant and thorough. He also has been lauded by women from every different aspect of his life. And this is significant.” 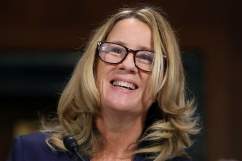 Kellyanne Conway incorporated President Trump into her argument. She appeared to suggest that the recent controversy has to do with President Trump. She argued that it is noteworthy that women who do not like the president nevertheless have praised Judge Kavanaugh.

“This is very significant for a man of character and integrity to be spoken about so highly by women who maybe didn’t vote for President Trump, maybe don’t call themselves Republicans, certainly in fact many who don’t. But women who went to Yale with him, women who were taught with him at Harvard, his many female law clerks, the mothers of the young girls that he coaches in basketball here in a Washington, D.C. suburb. And the 65 women who knew him in high school.

But let me make very clear again for those who just want to slice and dice what’s being said today on behalf of the president. This woman should not be ignored and should not be insulted. She should be heard.”

Conway then moved on to the confirmation hearings. She accused the Democrats of being unwilling to listen to what Judge Kavanaugh had to say.

“Now, let’s make very clear. Those Democratic senators had no interest in the mountain of evidence about Judge Kavanaugh’s character and integrity. They had no interest in that whatsoever. One female senator spent most of the time talking instead of asking him questions. Another female senator lied about his characterization of a legal case. And we all know that Cory Booker, restrained himself I guess with humility, he didn’t call himself Jesus, but referred to himself as Spartacus. So they weren’t interested in Judge Kavanaugh’s significant record and his character and integrity as testified by many women.”

The Senate Judiciary Committee was scheduled to vote on Judge Kavanaugh on Thursday, September 20. But senators including Republicans Jeff Flake and Bob Corker called for the vote to be delayed. On September 18, the vote was officially canceled by Senator Chuck Grassley, the chairman of the Judiciary Committee.