A 22-year-old U.S. Army soldier has been arrested along with his girlfriend after police say he killed his wife and then drove around with her body in the back of his girlfriend’s car while looking for a place to bury her. Authorities in Louisiana say the Fort Polk based soldier and his girlfriend were taken into custody on October 21 in Lake Charles after a traffic stop. The soldier’s girlfriend’s two young children were in the car and his wife’s body was found in the trunk, the Calcasieu Parish Sheriff’s Office said in a press release.

The soldier, Logan Kyle, is being investigated by the U.S. Army Criminal Investigation Command and charges are expected to be filed against him related to the homicide. His girlfriend, 24-year-old Sarah Parker, of Moss Bluff, was charged by the Calcasieu Parish Sheriff’s Office with obstruction of justice and failure to report a homicide. Her children were taken into state custody by the Department of Children & Family Services. The kids, ages 1 and 2, are now with their father and are safe, family members said on Facebook.

Authorities at Fort Polk identified Kyle’s wife as 21-year-old Shelena Kyle. The investigation into her death is ongoing and no details about how or when she died have been released. Investigators at Fort Polk say they have learned Shelena Kyle was killed by her husband on the base and Parker knew about the killing and was helping Logan Kyle try to get rid of the body and hide. It is not clear if Parker or Kyle have hired attorneys.

1. Police Received a Tip That Parker & Kyle Were Driving Around With His Wife’s Body in a Car After She Was Killed, the Sheriff Says

“A short time later deputies located the car traveling on North Franklin Street in Lake Charles and conducted a stop. While searching the car deputies located a deceased woman in the trunk of the car,” the sheriff’s office said. “CPSO detectives contacted the U.S. Army CID in reference to the homicide happening in Fort Polk. They picked up Kyle, who was detained at CPSO and will be investigating the homicide.”

The sheriff said both Kyle and Parker confessed.

“We believe he killed his wife, put her in the trunk of the car, met up with Miss Parker and drove around several locations, through our investigation, some in Calcasieu Parish, some in other parishes to try to dump the body,” Mancuso said at the press conference. “We were able to locate them before, in fact, they conducted that particular act. We contacted CID of the Army who is conducting the investigation, the murder, through our investigation we believe occurred on base, Fort Polk, so we will not be conducting that investigation, that will be up to CID with the Army, those are federal charges.”

Police have not revealed other details about the tip or how the tipster knew that there was a body in Parker’s car.

“We did get confessions from both parties involved in this, and again, I don’t want to be premature, because I know that CID with the Army has to do their investigation and continue on. So we have a lot more to do in this investigation. We are certainly not finished by any means and I think this is just kind of the basis and the start of what we believe were some strange events.”

2. The Sheriff Says Parker’s Children Were at Risk Because Deputies Had to Make a ‘Felony Stop’ With Guns Drawn & Could Have Been in the Line of Fire

“To throw a kink in it, there were two children, ages 1 and 2, in the car with them,” Mancuso said. “And what disturbs us about that as law enforcement officers is when we come in contact it would not be abnormal for us to conduct what we could consider a felony stop on the vehicle. And you know, if we had to shoot into this car because they were shooting back at us or for some other reason, we could have injured two innocent children.”

Mancuso said Parker could face additional charges for putting the infants in a dangerous position. “We may include more charges as the case progresses for cruelty to juveniles and other charges along with the suspect who we believe killed his wife.”

3. Logan Kyle & Shelena Gayler Kyle Both Grew Up in Indiana & Had Been Married Since 2016

According to Tippecanoe County, Indiana, marriage license records published in the Lafayette Journal & Courier, Shelena Rae Gayler and Logan Thomas Kyle were married in August 2016. Kyle was then 20 and Gayler was 19, according to the marriage record. On her Facebook page, Shelena said they were married August 10.

Shelana Kyle was originally from Lafayette, Indiana, and graduated from William Henry Harrison High School in 2015. Logan Kyle is also from Lafayette and attended the same high school.

“We are deeply saddened by the loss of this Patriot Family member. She was a member of our family and her death affects us all,” Colonel Kendall J. Clarke, the 3rd Brigade Combat Team commander, said in a statement. “We send our most sincere condolences to her family and friends.”

In a letter to base personnel and families, Major General Walter Piatt, the commanding general of the 10th Mountain Division, addressed the “devastating loss” of “one of our own.” He said, “I ask that you all who know this military life so well, also share the story of how she lived. Even not knowing personally, we know of the many sacrifices she made on behalf of her country as a military spouse. We know that at just 21 years of age, while her peers were likely concerned about far more trivial things, she was considering how wars abroad would affect her personally.”

Piatt added, “We know that she was an important part of our future readiness. We know that losing her affects us all. This is a devastating loss and if your grief becomes overwhelming, I urge you to find help. Speak to a loved one, a friend, your chaplain or a professional, but do not suffer alone. Please join me in holding her family and loved ones close to herat and honor them as all mourn Shelena’s death.” 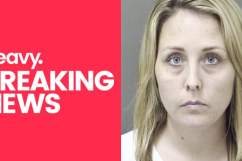 4. Kyle Has Served in the Army for 4 Years & Came to Fork Polk in 2017, Where He Was an Infantry Fire Team Leader, the Brigade Commander Says

The Army says Corporal Logan T. Kyle is an infantry fire team leader with 3rd Brigade Combat Team, 10th Mountain Division, and has been based at Fort Polk in Louisiana since 2017. According to the Army, Kyle joined the Army four years ago.

Other details about Kyle’s military service were not immediately available. According to his Facebook page, Kyle previously lived in Honolulu, Hawaii.

Authorities have also not released details about how long Kyle and Sarah Parker had been together. “We believe there was a relationship,” Sheriff Tony Mancuso said. “We believe that Ms. Parker was his girlfriend, which obviously led to the domestic issues.”

5. Kyle & Parker Remain in Custody & the Investigation Into His Wife’s Death Is Ongoing

Logan Kyle and Sarah Parker both remain in custody. Parker is being held at the Calcasieu Parish Jail, records show. Kyle is in Army custody. It is not clear when Parker is scheduled to appear in court.

Calcasieu Parish Sheriff Tony Mancuso said that the investigation into the homicide is being handled by the Army, because it is believed to have occurred at Fort Polk.

Mancuso was asked at the press conference about the cause and manner of death. “I’m not going to mention that, again, that investigation is for the Army to conduct and I don’t want to jeopardize any of their investigation. We know the manner, but we just aren’t saying that at this point.”

“This was certainly an interesting investigation. In many cases, we don’t get a call until the body is actually found. We actually got this one before it was dumped which actually made it easier,” Mancuso told reporters at a press conference. “I think this is just the start in what we believe are strange events that took place both in Leesville and our parish.”

Read More
5 Fast Facts, Army, Breaking News, Crime, Louisiana, Military, Police
Logan Kyle, a soldier at Fort Polk in Louisiana, is accused of killing his wife, Shelena Gayler Kyle, after her body was found in a car being driven by his girlfriend, Sarah Parker.