Chloe Jones is a Pennsylvania woman who was arrested after she taunted the Greene County Sheriff’s Office on Facebook when they included her mugshot as part of a “Top Ten Most Wanted” list Facebook post. Jones, a 23-year-old Waynesburg woman, was wanted on charges accusing her of failing to appear in court in a misdemeanor simple assault case, the sheriff’s office said.

On March 27, the sheriff’s office posted an updated most wanted list on Facebook and asked for the public’s help in finding Jones and nine others wanted on charges in the southwestern Pennsylvania county. Jones responded to the Facebook post with snarky comments taunting the police department and fighting with other commenters. On April 8, the sheriff’s office said in a new Facebook post that Jones had been captured.

“Ms. Chloe Jones and her witty comments are taking a hiatus from our Facebook comments section due to the jail not having internet for her to use,” the sheriff’s office wrote. “Thank you to the citizens of Greene County, Monongalia County and many others for your tips that lead to her arrest. Morgantown Police were able to take her into custody this evening.”

According to police, Jones was arrested in West Virginia in a county bordering Pennsylvania.

Here’s what you need to know about Chloe Jones:

1. Chloe Jones Asked the Police ‘Do You Guys Do Pick Up or Delivery?’

Chloe Jones commented on the Greene County Sheriff’s Facebook post on March 27 just hours after they listed her as one of the office’s new “Top Ten Most Wanted” list. Jones replied to the post with a comment saying, “Do you guys do pick up or delivery??????.”

Jones’ mugshot was posted by the department along with the comment, “#2 Chloe Jones, Wanted For Failure To Appear For Plea Court. Underlying Charges, Simple Assault.”

Several other commenters replied telling Jones to turn herself in. One wrote, “Why don’t you be an adult and turn yourself in dumb*ss? Do you think you’re cool to post sh*t like that? Cause you’re not. it’s trashy, and disturbing, and embarrassing.”

Another said, “idk you but there’s nothing funny about seeing yourself on a wanted poster. Its embarrassing. Turn yourself in, be responsible. It’s not too late to turn your life around. Be a responsible adult.”

Jones then responded, “well if you all really want to know why I didn’t show up to court I’ll tell u. And y’all can verify easily that my court hearing was at 9am well 6 hours before court is when Tyler [her boyfriend] does from the police… so where was I?? Hmmm trauma center at ruby memorial hospitAl! I called and let them know the next day that I was still st the hospital and hadn’t been awake to call and even had paperwork faxed.”

She then wrote, “Lmao me not showing up to court has nothing to do with drugs??? I always pass my drug tests for probation lmao like I said hard to show up to court when I’m sedated in the hospital ? I called my attorney and he said the warrant was already issued blah blah blah.. so of course I’m going to laugh when I’m sitting in the hospital and get on my Facebook and see that I made #2 most wanted for something that i couldn’t control… I even showed the nurses here at the hospital this and they were amazed and even gave me the copy’s they sent with dates and times showing I’m at the hospital.”

Jones wrote that the assault charge came from an incident the last time she was behind bars, “I’d have to commit a crime to do state time? it’s a simple assault case… a plea deal for a fight I had in jail with another girl. also u act like u even know me in any kind of way? I’ve never been in trouble for any kind of drug related crime??? so instead of being ignorant to the facts why don’t u use that little badge u wear that for some reason makes u feel like ur important and apparently know everybody’s life and look st my back round.”

Jones said in another post, “The funny thing is is I don’t even think a single person on here talking shit has ever even personally met me at all! If I’m wrong say so… and also you all have such a strong opinion and act like you know facts about how bad of a person I am thennnnnn please please explain to me what I have personally done wrong to u ? And I mean actual facts that I’ve done u wrong or so on! Not just what u have heard I’ve done and also not just what I’ve heard about me! I’ll wait?”

While fighting with other commenters, Jones denied using drugs, while some said they know her and know she has used drugs in the past. Jones also talked about being in West Virginia and investigatores used information from her posts to find her.

2. She Has Had Several Run-ins With the Law & Was Arrested & Hospitalized After Jumping Out of a ‘Stolen Truck’ Her Boyfriend Was Driving During a Police Chase in March

Chloe Ellen Jones has had numerous arrests in Pennsyvlvania since 2015, according to court records. She has been arrested several times in Greene County, and also has past arrests in Washington and Allegheny counties. Her last arrest was in March 2019 when she and her boyfriend, Tyler Gump, were involved in a police chase in East Bethlehem, Pennsylvania.

According to the Observer-Reporter, police said Jones jumped out of the stolen truck her boyfriend was driving while it was moving and was hit by one of the truck’s tires. Jones surrendered to police and was arrested and taken to the hospital.

Earlier in March, Gump and Jones were arrested on theft and receiving stolen property charges after state police said they stole a motorcycle, according to the Observer-Reporter. That case is still pending.

Chloe Jones in a previous mugshot.

In July 2017, Jones was charged with disorderly conduct and harassment, “for causing a noise disturbance and allegedly threatening hospital personnel while on the fourth floor of WHS-Greene hospital in Franklin Township Friday afternoon,” the Observer-Reporter wrote.

In November 2018, she was sentenced in several cases and spent time in jail, according to the Observer-Reporter:

Chloe Ellen Jones, 22, … Wind Ridge; offenses–escape, false identification to law enforcement and three traffic summary violations; following a traffic stop March 27 on state Route 188 in Jefferson Township, she gave her sister’s name to police instead of her own, then ran from them; sentence–152 days to 23 months in jail with credit for 146 days served, one year of probation, $262 in fines and 40 hours of community service. In a second case, she pleaded guilty to flight to avoid apprehension, for fleeing police after her probation officer saw her July 30 in a Rite Aid in Franklin Township. She was given an additional $200 fine and 20 hours of community service.

Online records show she has also received several traffic citations and also has previous arrests on charges of criminal mischief, driving without a license, driving an unregistered vehicle, operating a vehicle without insurance, reckless driving, driving with a suspended license, harassment, burglary, flight to avoid apprehension escape and providing false information to an officer

3. Jones, Is a West Virginia Native, but Has Also Lived for Several Years in Pennsylvania

Chloe Jones was born in Monongalia County, West Virginia, records show. But she has lived in both West Virginia and Pennsylvania, according to public records. Jones says on Facebook that she is living in Waynesburg, Pennsylvania.

On April 11, when news of her arrest went viral and was shared by national news outlets, her mother commented on the original Facebook thread using her daughter’s account.

“This stems over a simple assault charge that happened in county,she was disciplined for this while she was there.they have took this to a whole new level.when she was apprehended in Morgantown, they had 20 officers six or more cruisers,they threatened the people that they would be charged before she surrendered. They put so much energy and time and man power in to this one that you would think she had murdered,” her mother wrote. 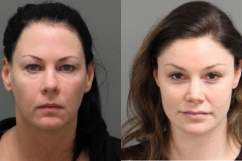 4. She Says on Facebook That She Is Soon-to-Be Married to Her Boyfriend, Is Pregnant & Is the Mother of 2 Sons

Chloe Jones wrote on Facebook that she is the soon-to-be Mrs. Gump, but it is not clear when or if she plans to marry her boyfriend, Tyler Gump. She is the mother of two sons, according to her Facebook page.

Jones is pregnant, her mother wrote in a Facebook comment to the police, asking them to handle her with care. The sheriff’s office responded, “it is the full intent of our office to take every wanted person into custody safely and without incident. That, however, requires cooperation from both sides. Since you are her mom, please advise your daughter that she will be handled with proper care when she comes to the Greene County Courthouse and turns herself in.”

In the Facebook comments on the sheriff’s office post, family members said that her mother is now raising her children. One friend wrote, “I just really hope she gets her life back together I can say chole was a great mother before the drugs took over her and I hope she can get clean and give them boys a good life.”

Her sister wrote in response to someone telling her to turn Chloe in, “My mom is raising her two kids. So they are priority, not trying to find out where she is to turn her in. She’s a big girl; and our world does not revolve around trying to help someone who doesn’t want to help themselves. Its not our job to stop our life to do the cops jobs for them. We don’t know where my sister is; she doesnt tell us anything.. And i really wish people would stop lecturing me about what my sister is doing.. Shes her own f*cking person , as am I.. And i have nothing to do with what she does.. Im not f*cking responsible for her.”

5. Jones Is Being Held Without Bail as a Fugitive From Justice in the Monongalia, West Virginia, County Jail & Her New Mugshot Shows Her With Dyed Hair & No Smile

Chloe Jones pictured in her mugshot after her arrest in Monongalia County, West Virginia.

Chloe Jones is being held without bail as a fugitive from justice at the Monongalia County Jail in West Virginia, online records show. Her new mugshot from the West Virginia arrest shows her hair dyed a new color.

It is not clear if she has an attorney who could comment on her behalf. It is also not known when she is scheduled to appear in court. She will likely make a court appearance in West Virginia and then be extradited back to Greene County, Pennsylvania, to face the pending charges against her there. 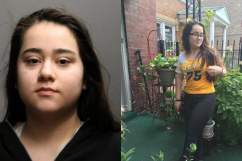 Loading more stories
wpDiscuz
0
0
Would love your thoughts, please comment.x
()
x
| Reply
Chloe Jones was arrested by police in Greene County, Pennsylvania, after taunting the sheriff's office on Facebook when they listed her in a Top Ten Most Wanted post.