Jose Simms is a Connecticut man who told Torrington Police he would turn himself in if a Facebook post of his wanted poster receives 15,000 likes. The Torrington Police Department posted about Simms and his challenge on May 22 and encouraged people to like the post.

Simms is wanted on charges of failure to appear in court, according to police. He contacted the police department through Facebook Messenger and asked about when he would show up on the department’s page as a wanted suspect. During the conversation, Simms told police he would turn himself in if that post got 20,000 likes. Torrington Police countered with 10,000 likes, and they compromised on 15,000 likes.

“He knew he missed court and that he has warrants,” Torrington Police Lieutenant Brett Johnson told The Register Citizen. “We started posting wanted people on Facebook and he wanted to know when he was going to be put up there.”

Here’s what you need to know about Jose Simms and his Facebook likes challenge:

1. Jose Simms Is Wanted for Missing a Court Hearing on Charges Including Risk of Injury to a Child, Violation of a Protective Order, Threatening, Misusing 911 & Making a False Statement

Jose Simms is wanted by the Torrington Police.

Simms has been arrested several times since 2017. According to court records, Simms was arrested in December 2017 in Enfield after a traffic stop. He was charged with illegal operation of a motor vehicle under the influence of alcohol and/or drugs, improper stop, improper turn, operating a motor vehicle without a license and possession of less than 1/2 ounce of marijuana. He was released on $1,000 bail, but a failure to appear warrant was issued in April 2019 after he missed a court hearing.

In September 2018, Simms was arrested by the Torrington Police and charged with second-degree breach of peace. He was released on $1,000 bond and missed a March 4, 2019, court hearing, records show.

In October 2018, he was charged by the Torrington Police again with second-degree breach of peace and felony violation of a protective order. He was released on $2,500 bail and his re-arrest was ordered March 4 after the missed court hearing.

Also in October 2018, Torrington Police charged Simms with felony risk of injury to a child and misdemeanor making a false statement. He was released on $2,500 bail in that case.

On January 4, 2019, Simms was arrested again by the Torrington Police and charged with violation of a protective order with threats of assault and harassment, according to court records. He was released from custody on $1,000 bail. On January 17, he was charged with second-degree reporting a false incident and misuse of 911, both misdemeanors. He was released on $2,500 bond.

Simms most recent arrest was February 28, when he was charged by Torrington Police again with second-degree breach of peace and violation of a protective order, a felony. He was released again on $2,500 bond. He missed a March 1 court date in that case, records show.

Simms has pleaded not guilty to all the charges against him. His attorney, public defender Alexandra Georgieva, could not be reached for comment by Heavy. Simms also did not respond to a request for comment from Heavy. Simms does not appear to have any convictions in Connecticut. 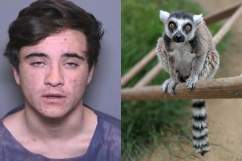 The Facebook post had nearly 4,000 likes as of 1 p.m. on May 22, 10 hours after it was posted. Jose Simms responded to the post to taunt the Torrington Police Department.

“Dam that’s a trash (pic) of me and only 13800 more likes to go nice job Torrington,” Torres wrote. The police department replied, “Jose, its the only one we had…hopefully we will get a “good” one soon ?.”

Torrington Police Lieutenant Brett Johnson wrote in the original Facebook post, “Here’s an interesting one…Jose Simms (The first warrant pictured) negotiated with me earlier this week (Through Facebook) and has agreed to turn himself in to Torrington Police if we can get 15,000 “likes” on this post (I said 10,000 he wanted 20,000, we split). It will be difficult but is doable.”

Johnson added, ” Then again, if you know where either of these guys are, you could always let us know that too, it’d save everyone from the suspense of the 15K….Let’s get it!!”

The Facebook post includes an unrelated wanted poster for 36-year-old Kristopher Waananen, who is wanted on motor vehicle violations and failure to appear in court.

3. Simms Posted on His Page in April That He Was Tired of ‘Playing Hide & Seek’ With Police

Jose Simms had previously hinted on Facebook that he was ready to turn himself in to police and face the charges against him.

On April 11, Simms wrote, “Im tired of playing hide and seek with 12 time to knock this time out and turn myself in. Please send adresses to my messanger so we can keep in contact while im locked up.” 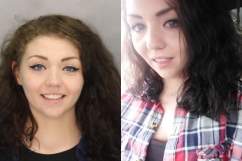 4. Police Think He Could Be in New York, but They ‘Have No Idea’ Exactly Where He Is

Torrington Police say they do not know exactly where Jose Simms is. Johnson told The Register Citizen, “We have no idea where this guy is other than we think he’s in New York. This gives us an opportunity to extend our reach.”

On Facebook, Simms says he is from Brooklyn, New York. He has also posted about news in the Poughkeepsie, New York, area.

Anyone with information about Simms is asked to call Torrington Police at 860-489-2007.

Johnson told The Register Citizen, “We haven’t done anything like this before but I know it’s been used in other places around the country.”

The Facebook post has received several comments from members of the community supporting the police department’s efforts. One woman wrote, “Liked & shared…it’s most likely one of the craziest requests I’ve liked, but for you who risk your lives everyday to keep each and every one of us safe, I thank you for your service. Hopefully he’s a man of his word.”

Another said, “I love the sense of humor from the Torrington Police Department! Praying that one way or another you meet your objective soon!”

A woman responded, “He’s probably lying. That’s what the bad guys do…but, you never know. I’ve heard of guys turning themselves in or giving up for a cigarette or bottle of water.” Torrington Police replied to her by saying, “we can hope he stays true to his word.”

Others were critical of the police department.

“I cannot believe we are helping a criminal get attention, fame, and notoriety for bad behavior. This is nuts,” one woman wrote.

Loading more stories
wpDiscuz
0
0
Would love your thoughts, please comment.x
()
x
| Reply
Jose Simms is a Connecticut man who told Torrington Police he will turn himself in on warrants if a Facebook post of his wanted poster gets 15,000 likes.