Facebook Ally Kostial was a 21-year-old University of Mississippi student found dead in an apparent homicide.

Brandon Theesfeld, a 22-year-old University of Mississippi student from Texas, has been arrested in connection to her death, according to the Oxford Eagle. Theesfeld is being held at the Lafayette County Jail on a murder charge. He was arrested Monday, July 22. Police have not said how Theesfeld knew Kostial, if he did.

Kostial was shot eight times, sources close to the investigation told WLBT-TV on July 23. Autopsy results that would confirm her cause of death and manner of death have not been made public.

The Lafayette County Sheriff’s Department has also not confirmed that Kostial was shot and have released few details about the case. The sheriff’s department said only that it was “apparent that foul play was involved” in her death. The sheriff’s department said they are not releasing additional details about the case at this time because the investigation is still ongoing. Kostial, who went by Ally Kostial, was going to be entering her senior year at the University of Mississippi in the fall and was set to graduate in 2020.

A GoFundMe has been set up to help the Kostial family with funeral expenses.

Here’s what you need to know about Ally Kostial and the investigation into her death:

Ally Kostial Was Found Dead by Deputies Who Were Patroling in Harmontown, Mississippi, About 20 Miles From the University of Mississippi Campus

Ally Kostial was found by Lafayette County Sheriff’s Department deputies Saturday morning, July 20, while they were on patrol in Harmontown, Mississippi, the sheriff’s department said on July 21 in a press release. Her body was found near Sardis Lake. It is not clear if she was killed there or if her body was brought there after her death.

The area where she was found dead is about 20 miles away from the University of Mississippi campus in Oxford. She was found by deputies on routine patrol at 10:23 a.m., authorities said.

According to WLBT-TV, Kostial was seen on surveillance video in Oxford’s Square area on Friday night stopping outside of a bar. Sources told the news station that Kostial did not enter the bar, she paused, turned and walked out of the camera’s view.

Kostial, who lives in Oxford, returned to her home about midnight Saturday, but left sometime after that, her roommates have told police, according to WLBT-TV. Her roommates told investigators they did not see her leave, the news station reports.

Sources told WLBT that Kostial’s body was found by deputies near Buford’s Ridge. The remote area includes a fishing camp and an area where locals and college students ride ATVs on weekends when the water is low. According to the news station, the water was high on Friday and Saturday, so there was less activity in the area.

Neighbors told WMCA-TV that they were surprised to see emergency responders in their small and remote neighborhood. “I was sitting on the couch and saw the ambulance go by and was curious and went outside and then the next thing I know the coroner came by and two unmarked vehicles,” Michelle Bramlett, a neighbor, told the news station. She added, “I just can’t imagine what the parents are going through right now and their family. It’s just very devastating.”

Another neighbor, Jim Bob Bromley, told WMCA, “You shouldn’t have to bury your kids. Nobody can describe that kind of pain and it’s forever. It doesn’t go away. It gets better but it doesn’t go away.” 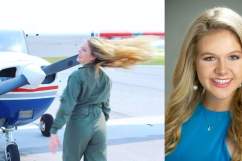 She Was a Graduate of Lindbergh High School in St. Louis & Was Attending Summer Classes at the Unviversity of Mississippi

Kostial graduated from Lindbergh High School in St. Louis in 2016. She was an honor roll student and National Honor Society. She was also on the Flyers track and field team.

She is survived by her parents, Keith Kostial and Cindy Kostial, and her brother, Andrew Kostial. Her father said Ally was in Oxford taking summer classes and working at the University of Mississippi.

Kostial Was Studying Marketing at the University of Mississippi, Was the President of the School’s Golf Club & Was in the Alpha Phi Sorority

Ally Kostial was studying marketing in the School of Business Administration, according to her Facebook and Linkedin profiles. She was minoring in management information systems. Kostial was set to graduate in the spring of 2020.

“Still can’t believe this is real. I’m so grateful that I got to know Ally throughout high school and we shared so many memorable experiences at Ole Miss together,” her sorority sister, Kassidy Desnoyer, wrote on Facebook. “From road tripping down to Oxford to being my Alpha Phi sister I will cherish all the memories we had together. She was the brightest light and always had a smile on her face. She truly was a ray of sunshine. My heart and condolences go out to the Kostial family❤️”

Another friend, Anna Pasco, told WMC-TV, “She quite possibly was the nicest human being that I’ve ever met. It’s just hard for me because all I can think about when I see her face is what she went through, what she was thinking, what she was saying. It’s hard. She is a beautiful, beautiful person inside and out and I love her and I’m going to miss her forever.”

Along with her studies at Ole Miss, Kostial was a seasonal lifeguard at a country club in Sunset Hills, near her hometown, and was a group fitness instructor at the University of Mississippi. She also volunteered as a childcare worker in Cape Town, South Africa, for a month in June 2017 and volunteered in a preschool classroom in Peru in June 2018.

Her father, Keith, wrote on Facebook, “Yesterday, Saturday afternoon, we were visited by the Sunset Hills Police who communicated to us that our beautiful dear Alexandria (Ally) Kostial was the victim of a homicide. As of now, it is believed the crime happened in Lafayette County, MS. She had been attending summer school and teaching fitness classes at University of Mississippi, (Ole Miss) In Oxford, Mississippi. She was a 2016 Lindbergh High School graduate. She was only 21. Investigations are ongoing.”

Her father told WMC-TV that they are finalizing funeral arrangements.

“We are truly saddened by the death of Alexandria Kostial. Ally was a valued member of our campus community. We extend our deepest sympathy to her family, friends, and classmates and stand ready to support them during this time,” Sparks said in the statement. “We appreciate the work of the Lafayette County Sheriff’s Department and Coroner as they conduct their investigation.”

Kostial’s friend, Casey Hendrickson, who grew up with her in Missouri, told the St. Louis Post-Dispatch, “She was the happiest and most positive person in the world. The light that she brought into this world was amazing.”

Another high school classmate, Samme Martin, told KTVI-TV, that Kostial was, “Very spontaneous. She would do just about anything. She loved outdoors, she loved just hanging out with her friends, she was the person you always wanted to be around.”

Margaret Illig told the news station, “When I was around her, I just felt like my spirit being lifted.”

Theesfeld Was Charged With Murder & Made His First Court Appearance

Brandon Theesfeld appeared before a Lafayette County judge on Tuesday, July 23, for his initial appearance in court on the murder charge, WLBT-TV reports.

He was recorded by a local news reporter walking out of the courthouse with his hands cuffed in front of him and his ankles shackled. He was wearing an orange prison jumpsuit as he was led to a sheriff’s department car.

According to Oxford Eagle reporter Jake Thompson, Theesfeld appeared before circuit court judge Andrew Howorth. He was held without bail, with a bond hearing set for a later date.

Theesfeld was originally booked into jail on an investigative hold, which allowed police to hold him in custody for up to 72 hours before formal charges were brought. The Oxford Eagle reports that on Tuesday, hold was crossed out in jail records and murder was written in its place.

According to his Facebook page, Brandon Austin Theesfeld is from Fort Worth, Texas. You can read more about him and the case here.