Eisenberg’s cause of death is not yet known. Eisenberg had suffered from medical issues since he was a child, having been born with only one kidney. He had his second kidney transplant nearly four years ago.

Eisenberg and his widow eloped late last year and were planning on having a big wedding to celebrate the occasion.

“There will never be another light like Aron’s,” Longo said. “The beauty that he was and the legacy he leaves behind is beyond words. I love him dearly and will miss him eternally.”

Here’s everything you need to know about Eisenberg:

1. Eisenberg Was Sent to the Hospital in Critical Condition Before he Died

Eisenberg’s widow, Malissa Longo, confirmed that he was dead on September 21, 2019.

Eisenberg was sent to the hospital in critical condition earlier the day he died, Longo said.

“He was an intelligent, humble, funny, empathetic soul,” Longo said. “He sought to live his life with integrity and truth.”

Aron Eisenberg goes toe-to-toe with Avery Brooks in this memorable scene from "Heart of Stone," demanding that Nog gets a shot at Starfleet Academy. #StarTrek #AronEisenberg pic.twitter.com/7zpAp4e3Jn

Eisenberg has 26 acting credits to his name, according to his IMDB page. This includes appearances in Star Trek TV shows and video games like Star Trek: Renegades, Star Trek Online, Star Trek: Voyager and of course Star Trek: Deep Space Nine where he had arguably his most beloved role as Nog.

Nog, not wanting to emulate the wasted potential of his father, was determined to join Starfleet. Not only did he become the first Ferengi to join Starfleet, but he even reached the rank of Lieutenant Junior Grade, according to Gizmodo.

“Nog was a fantastic character, and Eisenberg imbued him with a distinct and powerful sense of life,” wrote Julie Muncy of Gizmodo.

According to the official Star Trek website, the producers for Deep Space Nine didn’t tell Eisenberg anything about the character including how many episodes he would be called to do.

“I thought every episode I was doing might be my last episode,” he said in a 2012 interview with the website.

He went on to appear in over 40 episodes of Deep Space Nine.

It took about an hour and a half to put on the makeup for Nog, Eisenberg told Red Carpet News TV.

He told Red Carpet News TV that the story arc for Nog paralleled his own life pursuing acting as a career.

“To have a character like Nog who steps out of the norm of what his family was or what his heritage is, what his race does, and say ‘I want to do this’ and then went for it and failed many times… I think Nog was one of the most human characters because of that,” Eisenberg told the publication. “Because he would fall and pick himself up and try again.”

Early in his career, he appeared in the TV series Straight Up, the TV movie Amityville: The Evil Escapes as well as the films The Horror Show, Playroom and Beverly Hills Brats, according to the Star Trek website.

He along with fellow Star Trek Veterans Cirroc Lofton and Ryan T. Husk hosted a podcast called The 7th Rule.

According to his Facebook page, he studied theatre at Moorpark College in Moorpark, California.

He was also a professional photographer under his company, Aron Scott Photography, according to the Star Trek website.

He also coached his son’s soccer team. Coaching soccer was one of his passions, according to Longo.

Coaching soccer was one of the great passions in @AronEisenberg 's life. Coaching his son, @faroonmive 's, team was one of his greatest joys. He loved being a father and loved his boys, so much. One of the first things that impressed me about Aron, was his dedication to his sons pic.twitter.com/rh7ETbNWOP 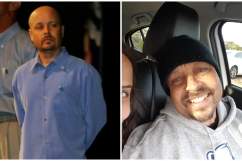 Eisenberg was born with only one kidney, according to the official Star Trek website. The kidney failed and he went on dialysis at age 14 and had his first transplant at 17 from a cadaver.

He underwent a second kidney transplant on December 29, 2015. Longo set up a GoFundMe campaign to raise $10,000 for the surgery and they made $13,995 from 330 donors. Longo said that any money left over from the campaign will be given to charities that help support organ donation and other needs for donors and recipients.

Longo said that Aron was cracking jokes all the way up to his surgery. Within a day of the surgery, the kidney had already started to function.

For his second transplant, he spent four months on the waiting list before matching with a friend named Beth Bernstein, who saw his Facebook post about the need for a new kidney and offered to donate one of hers, according to the Star Trek website.

“She is just so incredibly selfless to give to me like this that words cannot express my gratitude to her,” said Eisenberg in a 2015 interview with the website.

“She is giving us the best gift we could ever receive,” said Longo at the time. “There is no way we could repay her enough for her amazingly generous donation.”

One of the nurses told Longo that in all of his years working at the hospital, this was the first time he had seen a donor and a recipient placed in rooms side by side.

On the campaign page, Longo shared that Eisenberg was adopted.

“Aron’s mom has often told me that adopting Aron was the best thing she has ever done,” Longo said. “I can absolutely understand why. He is a charismatic, precocious, individual, with so much love to give. He always wants to see the best in people even if they have harmed him in some way.”

4. He & His Wife Eloped & Had Planned on Celebrating With a Big Wedding Ceremony Later, She Wrote on Facebook

Longo said that she and Eisenberg eloped on December 28, 2018.

They were planning to have a big wedding, but they delayed it to save up on money.

According to the Star Trek website, Longo and Eisenberg were engaged on November 26, 2016 and dated for three years prior.

Longo is an actress in her own right, starring in Valor Infinity: The Evander Chronicles and appearing in other TV shows. Both she and Eisenberg appeared in the show Renegades. 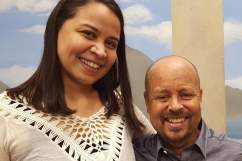 We’re heartbroken to share news of the loss of one of our family. Aron Eisenberg was an enormous positive presence in any situation. Forever kind, caring & deeply thoughtful, Aron was every bit as passionate as he appeared on screen. Our love & gratitude is with him & his family. pic.twitter.com/zbXpAdH5pL

Fans of Eisenberg’s work have taken to Twitter to mourn his death. Among those grieving are the official Twitter accounts for Star Trek news website TrekCore.com, The 7th Rule, Star Trek Online, and What We Left Behind, a feature documentary on Deep Space Nine.

Our beloved friend and brother, Aron Eisenberg, has passed away today. Please keep his wife, Malissa, and family in your thoughts and send them all your love. He will be missed more than anything- his heart, his laugh, his smile- and we cherish every single moment we had with him pic.twitter.com/gRurjuIshy

We've lost a member of our family today. Rest in Peace, Aron, thank you so much for always brightening our lives with everything you did. https://t.co/PqG29Dd3Ex

So sad to hear of @AronEisenberg passing away.

His portrayal of Nog on #DS9 showed someone who fought to be more then society said he should be.

My heart is breaking at Aron Eisenberg’s passing. Nog was such an inspirational character and I know that Aron was too. ❤️ pic.twitter.com/7UfMXUmkcK

Players of Star Trek Online hosted a torchlight vigil at the in-game Quark’s Bar the day after Eisenberg’s death, as reported by PC Gamer.

Eisenberg’s son is hosting a memorial for his father in World of Warcraft on September 29 at 7-8 p.m. PST. His son said that the two played the game together for the past 15 years and Eisenberg ran his own guild.

“I even recently got a tattoo from the game on my arm because those times made me so happy to spend with him growing up,” his son said.

Correction: This post was updated to state that Eisenberg had his own podcast, not a TV show.