After months of investigation, including private and public testimony from government officials, the House Intelligence Committee released a draft report on its impeachment inquiry of President Donald Trump.

The 300-page report, titled “The Trump-Ukraine Impeachment Inquiry Report,” can be read in full here. It was written by the staff of the House Intelligence, Oversight and Reform and Foreign Affairs Committees.

“The evidence is clear that President Trump used the power of his office to pressure Ukraine into announcing investigations into his political rival, former Vice President Joe Biden, and a debunked conspiracy theory that it was Ukraine, not Russia, that interfered in the 2016 election. These investigations were designed to benefit his 2020 presidential reelection campaign,” the statement said.

“The evidence is also clear that President Trump conditioned official acts on the public announcement of these investigations: a coveted White House visit and critical U.S. military assistance Ukraine needed to fight its Russian adversary,” the statement said. “Finally, the evidence is clear that after his scheme to secure foreign help in his reelection was uncovered, President Trump engaged in categorical and unprecedented obstruction in order to cover-up his misconduct.

Trump's Acting Chief of Staff publicly stated that they withheld aid to obtain political favors, and said we should "get over it."

The president's defenders ask the American public to get used to the idea of a corrupt president, and get over it.

The question is: Should we? pic.twitter.com/D9kXpcm9lm

The report accuses President Donald Trump of using the powers of the presidency and “undermined our national security” in order to help him get reelected in 2020. The two things the report report singles out in favor of its argument that Trump offered a “quid pro quo” deal to Ukraine in exchange for an investigation into former Vice President and 2020 Democratic challenger Joe Biden and his son Hunter Biden was “a coveted White House visit and critical U.S. military assistance Ukraine needed to fight its Russian adversary.”

“President Trump’s scheme subverted U.S. foreign policy toward Ukraine and undermined our national security in favor of two politically motivated investigations that would help his presidential reelection campaign,” the report says. “The President demanded that the newly-elected Ukrainian president, Volodymyr Zelensky, publicly announce investigations into a political rival that he apparently feared the most, former Vice President Joe Biden, and into a discredited theory that it was Ukraine, not Russia, that interfered in the 2016 presidential election. “To compel the Ukrainian President to do his political bidding, President Trump conditioned two official acts on the public announcement of the investigations: a coveted White House visit and critical U.S. military assistance Ukraine needed to fight its Russian adversary.”

The report goes on to say that Trump knowingly tried to influence the 2020 election, saying “We were struck by the fact that the President’s misconduct was not an isolated occurrence, nor was it the product of a naïve president.”

“Instead, the efforts to involve Ukraine in our 2020 presidential election were undertaken by a President who himself was elected in 2016 with the benefit of an unprecedented and sweeping campaign of election interference undertaken by Russia in his favor, and which the President welcomed and utilized.”

BREAKING: President Trump abused the power of his office by pressuring Ukrainian President Zelensky to investigate Joe Biden and other Democrats, the House Intelligence Committee concluded in a report https://t.co/PAL9x7PkvP

Several career diplomats and other administration officials testified before the House Judiciary Committee, including former U.S. Ambassador to Ukraine Marie Yovanovitch, who was recalled to Washington by Trump in August and criticized by the president during her testimony.

The report says that President Donald Trump “intentionally bypassed” many of career State Department officials and others, but it also named several top Administration officials who were aware of Trump’s intentions. 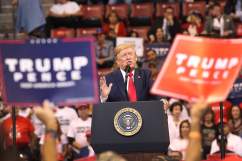 “Although President Trump’s scheme intentionally bypassed many career personnel, it was undertaken with the knowledge and approval of senior Administration officials, including the President’s Acting Chief of Staff Mick Mulvaney, Secretary of State Mike Pompeo, and Secretary of Energy Rick Perry,” the report says.

House Republicans issued their own report on the impeachment inquiry. It can be read in full here. Their report accuses House Democrats of “trying to undo the will of the American people” and prevent Trump from being reelected.

“At the heart of the matter, the impeachment inquiry involves the actions of only two people: President Trump and President Zelensky. The summary of their July 25, 2019, telephone conversation shows no quid pro quo or indication of conditionality, threats, or pressure—much less evidence of bribery or extortion. The summary reflects laughter, pleasantries, and cordiality,” the GOP report says. “President Zelensky has said publicly and repeatedly that he felt no pressure. President Trump has said publicly and repeatedly that he exerted no pressure.

The impeachment inquiry now heads to the House Judiciary Committee, chaired by Rep. Jerry Nadler, D-N.Y., which will determine if the accusations against Trump are grounds for impeachment. Several constitutional experts will testify on Wednesday.

“As required under House Resolution 660, the Intelligence Committee, in consultation with the Committees on Oversight and Reform and Foreign Affairs, has prepared this report to detail the evidence uncovered to date, which will now be transmitted to the Judiciary Committee for its consideration,” the Democrat’s report explains.

Trump was invited to testify but he declined and he is currently in London for a NATO summit. Trump called the release of the House Democrats’ report “unpatriotic.”

TRUMP on House Dems' impeachment report: "I saw it & it's a joke. Everybody is saying it. And I watched reviews. I watched Sean Hannity, I watched Laura Ingraham, I watched Tucker Carlson, I watched a lot of other legal scholars, frankly … Alan Dershowitz, & many more" ? pic.twitter.com/7uTE87BDYH

Loading more stories
wpDiscuz
0
0
Would love your thoughts, please comment.x
()
x
| Reply
After months of investigation, including private and public testimony from government officials, the House Intelligence Committee released a draft report on its impeachment inquiry of President Donald Trump.