In a viral video taken at a rally outside a church in New Mexico on May 17, Couy Griffin, the co-founder and head of Cowboys for Trump, said, “the only good Democrat is a dead Democrat” to vigorous applause, according to the Daily Beast. Griffin is a pastor and former restaurant proprietor who made headlines as a street preacher who roamed the country on horseback with copies of the Book of John, according to the Santa Fe New Mexican.

“I’ve come to a place where I’ve come to the conclusion that the only good Democrat is a dead Democrat,” the now-viral video begins. “I don’t say that in the physical sense and I can already see the videos gonna get edited where it says I want to go murder Democrats,” Griffin continues. “No, I say that in the political sense because the Democrat agenda and policy is anti-American right now.”

In the Video, Griffin Defended His Assertion Because ‘We Need To Have the Majorities in the House and the Senate’ 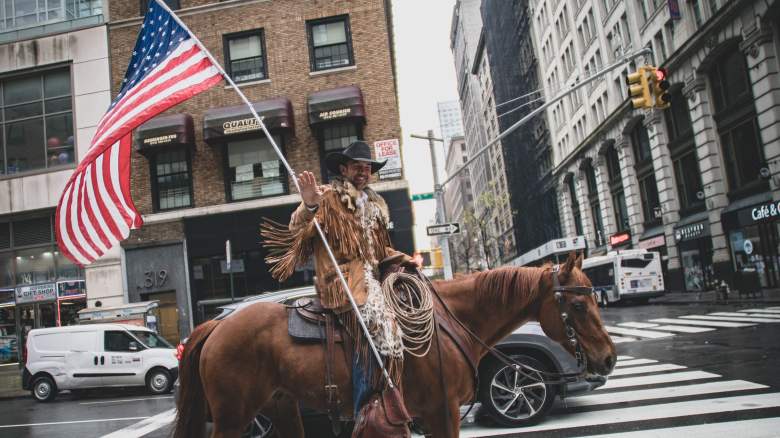 GettyOtero County Commission Chairman and Cowboys for Trump co-founder Couy Griffin rides his horse on 5th avenue on May 1, 2020, in New York City.

“I say the reason why the only good Democrat’s a dead Democrat, I’m saying politically speaking, and I’m saying it because we need to have the majorities in the House and the Senate,” Griffin explains. “It’s the only way that we’re gonna put the brakes on a out-of-control governor.”

According to a recent poll, 62% of New Mexicans approve of New Mexico Governor Michelle Lujan Grisham’s handling of the pandemic, compared to 26% who disapprove. As of May 29, New Mexico has had 7,364 confirmed cases of the coronavirus and 335 deaths. The state has conducted 183,544 tests, more than 24 other states despite being the fourth poorest state in the union, according to Business Insider. Only 28% of all states have a Democratic “trifecta” in which the state legislature and the gubernatorial seat are controlled by Democrats, compared to 42% of states in which Republicans hold the “trifecta.” New Mexico, where Griffin lives, became one of twelve states to have a Democrat “trifecta” in 2018, two years after Lujan Grisham was elected governor.

“Sometimes you have to hit very rock bottom in order to make real change. It can happen in our own personal lives. It happens in community, but it’s also happening in government right now,” Griffin said in the video. “I believe our government is showing the very worst that they have and I believe that it’s going to bring about the very best that our country has, politically speaking.”

Thank you Cowboys. See you in New Mexico! https://t.co/aCRJeskUA8

Shortly after the video began circulating the internet, the Daily Beast ran a story titled “Anti-Lockdown Protesters Now Calling for Dems To Die.” The article claims that Griffin repeated the dead Democrat motto in an interview, adding, “I could’ve chosen a different verbiage, you know. I guess I need to be more careful when I choose the words that I speak.” Griffin continued, “…it’s just so hypocritical of the left how they’re blowing this up, like I’m some hate-speech murderer.”

In an interview with the Santa Fe New Mexican, Griffin claims that he “absolutely” could have used “different verbiage.” “I could have said the only good Democrat policy is a dead Democrat policy,” Griffin said. “I did try to clear up the water by saying I didn’t mean it in the physical sense.”

In response to the Daily Beast article, Cowboys for America tweeted “The news is fake” and included the video. On May 27, President Trump retweeted the post, writing, “Thank you Cowboys. See you in New Mexico!”

Trump shared a video that begins “the only good Democrat is a dead Democrat.” Remember: when he referred to immigrants & asylum seekers as an “invasion”, an “infestation”, as “animals” they – and anyone perceived to be an immigrant – became targets. 23 people murdered in El Paso.

In response to Trump’s retweet, Beto O’Rourke, a former Texas State Representative and Democratic presidential candidate, reminded users of the impact of language and invoked the mass shooting that took place at a Walmart in El Paso Texas on August 3, 2019. Police attributed a racist, 4-page manifesto published online minutes before the shooting took place to Patrick Criusus, who was charged with federal hate crimes in October. The manifesto includes anti-immigrant rhetoric aimed at the Hispanic population, according to the New York Times.

The El Paso shooting took its twenty-third victim in April after a nine-month battle in the hospital. The shooting is the largest terrorist attack committed against the Latinx community in modern history.

Loading more stories
wpDiscuz
0
0
Would love your thoughts, please comment.x
()
x
| Reply
In a viral video taken at a rally in New Mexico, Couy Griffin said, "the only good Democrat is a dead Democrat" to vigorous applause