Members of the grassroots organization ReopenNC gathered in downtown Raleigh, North Carolina, on Tuesday, April 14, to protest against the safety measures enacted by Governor Roy Cooper to combat the COVID-19 coronavirus. Jonah Kaplan with ABC11 reported via Twitter more than 100 people, including small business owners, participated in the protest, which took place outside the North Carolina Legislative Building.

To abide by social distancing guidelines, some protesters wore masks, while others participated from their vehicles. When Raleigh police asked protesters to disperse, many returned to their cars to honk before officers began to approach cars one by one, Kaplan reported.

Here’s what you need to know about the protest: 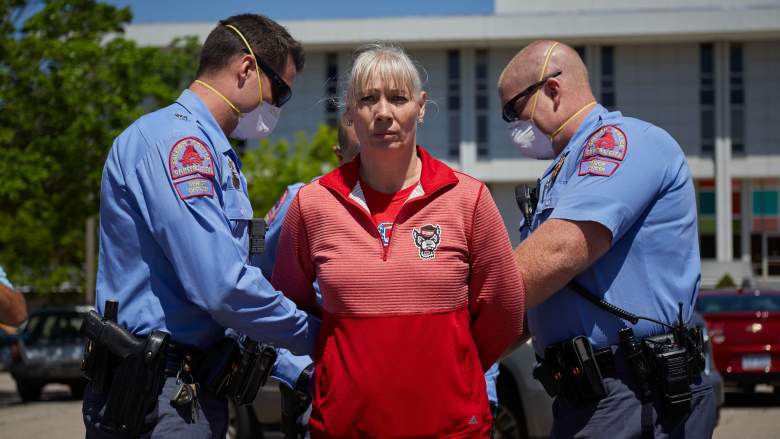 Getty A protester from REOPEN NC is arrested after refusing to leave a parking lot during a demonstration against the North Carolina coronavirus lockdown.

Throughout the protest, Raleigh Police tweeted updates to inform readers that they were monitoring the situation and to announce when the protest had been cleared and streets reopened. One protester, 51-year-old Monica Faith Ussery, was arrested and charged with violating the governor’s executive order, the Raleigh News & Observer reports. Ussery was charged with a class 2 misdemeanor, which could carry a potential sentence of up to 60 days in jail and a fine of up to $1,000.

According to Raleigh Police via their Twitter account, the protesters were in violation of one of Gov. Roy Cooper’s executive orders. On March 27, Gov. Cooper issued an executive order directing North Carolina residents to stay at home. The order went into effect on March 30 and lasts for 30 days. The order defines essential business and details social distancing requirements. It also explicitly bans mass gatherings of “more than ten (10) persons in a single room or single space at the same time,” with exceptions granted to essential businesses and funerals.

In response to inquiries made by Kaplan and others, Raleigh Police issued additional tweets referring readers to Section 2 and Sections 1 & 3, respectively, of the March 27 order. In response to one particular inquiry, RPD tweeted the following:

Protesting is a non-essential activity.

This tweet prompted Raleigh Police to issue a long-form statement in which they reiterated their responsibility to uphold the stay-at-home order.

“Under these current and temporary declarations, protesting is not listed as an essential function,” the statement reads. “But more important is the health and wellness of all who live in our community, including the officers who much engage in circumstances such as these.” 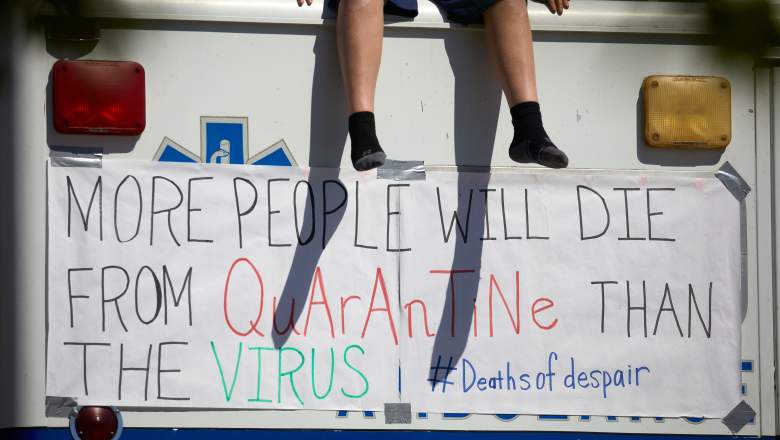 A private ReopenNC Facebook group was created on April 7 and current has more than 30,000 members. The description on the page states that participants are “residents of North Carolina that stand for The Constitution” and demands that officials “{r}eopen” the state by April 29, the same day the executive order will expire. The description also states that “several other states have not enacted stay at home orders.”

CNN reports that seven states – Nebraska, Iowa, Arkansas, North Dakota, South Dakota, Utah, and Wyoming – have not issued stay-at-home orders at the gubernatorial level. These seven states have all reported fewer than half the number of coronavirus cases confirmed in North Carolina, respectively. 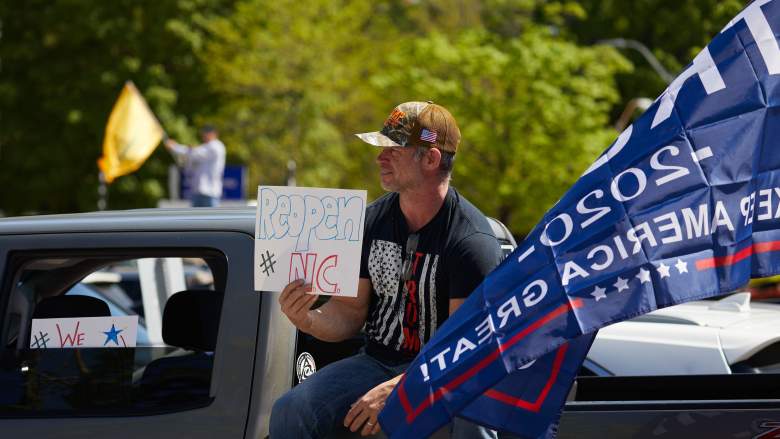 GettyProtester from REOPEN NC demonstrates against the North Carolina coronavirus lockdown at a parking lot with a Trump 2020 flag.

In one photo of the event, a protester sits on a truck holding a homemade “#Reopen NC” sign as a Trump 2020 flag waves nearby. On Monday, President Trump tweeted that, “{f}or the purpose of creating conflict and confusion, some in the Fake News Media are saying that it is the Governors decision to open up the states, not that of the President of the United States & the Federal Government.” He continued, “Let it be fully understood that this is incorrect….A decision by me, in conjunction with the Governors and input from others, will be made shortly!”

During today’s coronavirus press briefing, Trump seemed to alter his statement, saying, “I will be speaking to all fifty governors very shortly, and I will be authorizing each individual governor of each individual state to implement a reopening.”

READ NEXT: Meet the Man Who Is Standing in for British Prime Minister Boris Johnson