Jarred Tipton has been identified as the officer who said “I don’t care” to Derrick Scott, a 42-year-old black man who died in Oklahoma City police custody in May 2019 after saying he couldn’t breathe. Tipton and two other officers, Ashley Copeland and Sergeant Jennifer Titus, restrained Scott after responding to a disturbance call, according to the Oklahoma City Police Department.

Newly released body camera videos are gaining attention in the wake of the death of George Floyd in Minneapolis.

The footage shows Scott putting his hands up, then running from the officers. He was found to be armed with a handgun, the Washington Post reported. Officers restrained him, at some points kneeling on his back, for around 13 minutes, the Post reported.

At one point, Scott can be heard in the video saying, “I can’t breathe! Please! Help me! I can’t breathe.” Tipton replies to Scott, “I don’t care.”

Scott eventually became unresponsive, The Washington Post reported, and a paramedic administered medical care at the scene. Scott was taken to a nearby hospital, where he died due to a collapsed lung. His autopsy cited other contributing health factors: physical restraint, recent methamphetamine use, asthma, bullous emphysema and atherosclerotic heart disease.

The new footage of Scott’s arrest was released on Monday night, as Oklahoma City police officials responded to one of the demands by Black Lives Matter protesters, according to KOCO 5. There are four separate videos, which you can watch here.

Tipton Has Been an Oklahoma City Police Officer for 6 Years

According to a 2018 memo by the city of Oklahoma City, Tipton, 30, has been an officer for the city for six years. He was featured in a report by The Oklahoman in 2019 titled, “A good deed, a bad day, and a shootout with police.”

In the video, Tipton said, “I don’t care” when Scott said he couldn’t breathe. Another officer said, “You can breathe just fine.”

Minutes later, one of the female officers said, “He’s acting like he’s unresponsive.” It took several more minutes for the officers to reposition Scott’s body and take all weight off of his back, videos show.

Following Scott’s death in 2019, all of the officers on the scene were cleared of any wrongdoing, including Tipton. Authorities in Oklahoma City maintain today that none of the officers did anything wrong.

Oklahoma County District Attorney David Prater told the Associated Press, “This guy runs from the police. He’s got a 90% occluded major artery in his heart. I mean, he’s just a perfect candidate to die when you’ve got meth in your system and those kinds of physical ailments and then you fight with police. [The officers] didn’t do anything wrong at all.” 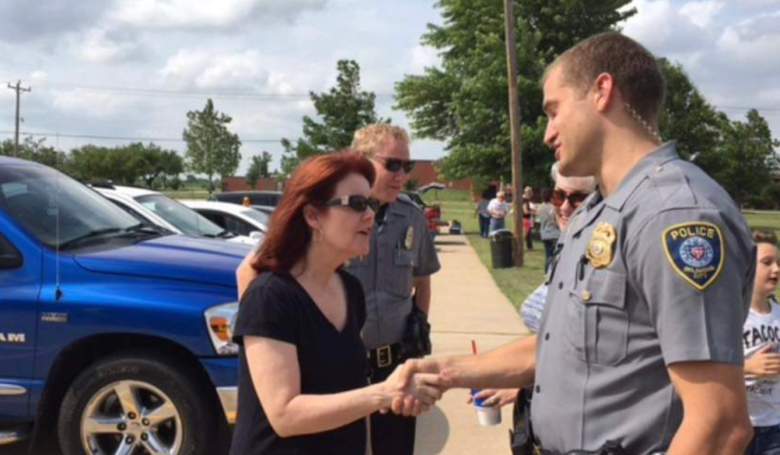 Though Tipton doesn’t appear to have a public social media presence, he appears occasionally in the Facebook photos for the Oklahoma City Police Department’s account. The above photo was posted on May 22, 2016.