Alina Tsybulnik is the girlfriend of Trevor Reed, a U.S. Marine veteran who was detained in Russia for nearly three years. Reed was staying with his girlfriend in Moscow when he was detained in August 2019. She is a Moscow native.

Tsybulnik, who goes by Lina, has advocated for Reed since his arrest. Reed was released from prison in Russia today, April 27, 2022, in a prisoner swap. Reed had been arrested on charges of assaulting a police officer, but the U.S. government considered him to be a hostage and his parents launched a campaign pleading for his release, along with Tsybulnik.

U.S. Secretary of State Antony Blinken said in a statement Reed was “wrongfully detained” and called for the release of additional U.S. citizens detained abroad, including Paul Whelan.

Reed, 30, was released in exchange for Russian pilot Konstantin Yaroshenko, who was convicted of drug trafficking, according to NPR.

1. Tsybulnik & Reed Were Together at an Office Party for Her Law Firm the Day of His Arrest

How his mom feels about the crisis now unfolding on @wfaa at 10. pic.twitter.com/vpEQmtvljL

Tsybulnik was working for a law firm during the summer of 2019 when Reed was arrested, according to statements from Reed’s family. She was 22 at the time. The couple was celebrating at a park with her colleagues the day of the party that ultimately ended in his arrest, Joey Reed, Trevor Reed’s dad, told Fox News.

Reed’s family described the events leading up to his arrest in a statement, saying he was at an office party with his girlfriend when he was either drugged, or became severely intoxicated.

“Later, the police were called and they took him to the police station instead of a medical facility which is the norm for intoxicated Russian citizens. We believe this was because he was American and they knew he had money,” the statement said.

Watch Trevor Reed's parents describe to @brikeilarcnn the moment they found out their son was coming home: https://t.co/t0qbFBKw5o

His family said that his girlfriend and others were asked for a bribe, and Tsybulnik was told to return a few hours later to pick him up.

“Just prior to her return, Trevor was interrogated by the FSB about his military service. Soon after they left, he was charged with a Level II crime of intentionally endangering the lives of the police officers who brought him to the jail. Trevor’s bail was denied based on a false charge of improper registration,” the statement said.

Access to videos that may have depicted the alleged assault leading to his arrest were not initially provided to his defense team, the family said. Attorneys eventually obtained the footage, and said it disputed the claims that Reed committed any crime against the officers.

“The Defense obtained hours of video from several cameras along the police car route that show the police lied about what happened on the drive to the station,” the statement said. “The videos were analyzed by Russian government experts that determined that the police car never swerved at all and also never slowed down. When the police officers were pressed by the Defense attorneys in court, they changed their stories several times and finally said they didn’t remember. These changing stories brought about laughter in the courtroom including the judge.”

2. Tsybulnik & Reed Are in a Long-term Relationship & He Was Visiting Her in Moscow the Summer of His Arrest

Russian state media has released a video of what it says is American Trevor Reed, who has been detained in Russia since 2019, at an airport near Moscow. Watch the moment here: https://t.co/QNXvhVBKd3

Tsybulnik, who was with Reed the day of his arrest, has disputed the police account of Reed’s actions that night, according to CNN.

She told Russian media outlet TASS, “(The police) constantly change their story … in my opinion, Reed was too drunk to resist them,” according to CNN.

Reed’s parents, Joey and Paula Reed, spoke with President Joe Biden on March 8 after they waved at his passing motorcade in Fort Worth, Texas, the family told CNN. An attempt to set up a meeting with Biden initially failed, but they later spoke with him over the phone.

“I just can’t imagine what you’re going through,” Biden could be heard saying on the cell phone’s speaker, according to CNN. “I don’t want you to think that it’s not something I constantly think about.”

She told reporters that Biden said he “thinks of Trevor every day and that he feels horrible that he hasn’t been able to bring Trevor home yet. And he said, ‘We’re not going to stop.'”

“He said he prays for our son every day and that he said a rosary, before he came to Fort Worth, for our son,” Joey Reed told CNN.

3. Tsybulnik Was Escorted From the Courtroom at Reed’s Trial After the Guilty Verdict Was Announced 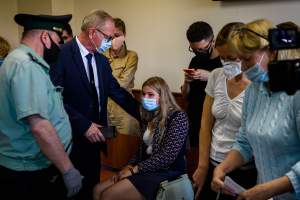 Tsybulnik attended Reed’s trial and was escorted from the courtroom by police following her reaction, according to Yahoo News.

She burst into tears after the judge read a guilty verdict, the outlet reported.

“Are you serious?” she shouted, before police carried her out of the courtroom. “This is the image of Russia!” she continued, according to Yahoo News.

U.S. Ambassador to Russia John Sullivan called Reed’s trial “theater of the absurd” after the 2020 sentencing. Reed was sentenced to 10 years in prison, according to CNN.

Footage of Trevor Reed taken to #Moscow's Vnukovo airport, before flying home to the US. He had been jailed since 2019. when he was convicted with attacking a policeman. US and his family had insisted that his jailing was unjustly pic.twitter.com/rDcU8hufFI

Tsybulnik and Reed met in 2016, and have remained together since then, according to Free Trevor Reed, a website set up to advocate for his release.

Reed was in Russia in 2019 because he chose Russian as a part of his college requirements to learn a foreign language. He chose Russian so he could learn Tsybulnik’s native language and communicate with her family in their own language, the page says.

In 2016, Trevor met a young Russian woman who would later become his girlfriend. Her name is Alina. In 2017, Trevor returned to college and was working toward a degree in International Studies at the University of North Texas. As a requirement of his degree program he selected Russian as a foreign language. He had always wanted to learn Russian and it was his girlfriend’s native language. Trevor wanted to be able to talk to her family in Russian. In May of 2019, Trevor traveled to Moscow to take Russian lessons and visit his girlfriend for the summer. Trevor’s Family loves Lina!

Reed made headlines when he went on a hunger strike to protest his treatment, saying that when he contracted tuberculosis, he was sent to solitary confinement instead of treatment, according to NPR.

Reed’s family said they expect he will tell his story on his own time, but asked for privacy while he recovers, according to the statement from his family.

“While we understand the interest in Trevor’s story — and as soon as he’s ready, he’ll tell his own story, we’d respectfully ask for some privacy while we address the myriad of health issues brought on by the squalid conditions he was subjected to in his Russian gulag,” the statement said.

U.S. senior administration officials said Reed was in “good spirits” and that his health was an “intense concern,” according to Fox News. His health was a primary factor in his release, Fox News reported.

5. Tysbulnik Has Stayed Largely Out of the Public Eye But Provided Some Statements to Media During Reed’s Imprisonment

Trevor Reed’s girlfriend, Alina Tsybulnik, says he was brought to SIZO 5 detention center in Moscow. She worries the lack of contact may be authorities covering up an injury. She also says he is being used as a pawn, and was sentenced to 9 years only because he’s an American. https://t.co/bIJQjfxMiu

Tsybulnik has largely stayed out of the public eye during his detention, but has provided some updates to the media over the years.

“Trevor Reed’s girlfriend, Alina Tsybulnik, says he was brought to SIZO 5 detention center in Moscow,” a CNN reporter wrote on Twitter in 2021. “She worries the lack of contact may be authorities covering up an injury. She also says he is being used as a pawn, and was sentenced to 9 years only because he’s an American.”

“He was essentially in solitary confinement, I believe, for over a year in a pretty bad prison,” Joey Reed told Fox News. “Once he got to the labor camp … they would wake him up every hour. You know, they were punishing him for different things.”

“My son saw the sun maybe a dozen times in two years,” Joey Reed added, according to Fox News.

READ NEXT: Trevor Reed: 5 Fast Facts You Need to Know

Loading more stories
wpDiscuz
0
0
Would love your thoughts, please comment.x
()
x
| Reply
Alina "Lina" Tsybulnik is the girlfriend of Trevor Reed, a U.S. Marine veteran who was detained in Russia for nearly three years. Reed was staying with his girlfriend in Moscow when he was detained in August 2019. She is a Moscow native.