Dana Perino is an anchor on Fox News. She co-hosts the weekday morning program “America’s Newsroom” alongside Bill Hemmer and is a panelist on “The Five.” Before joining Fox News in 2009, Perino served as the White House press secretary during President George W. Bush’s administration.

Here’s what you need to know about Perino’s background and family: 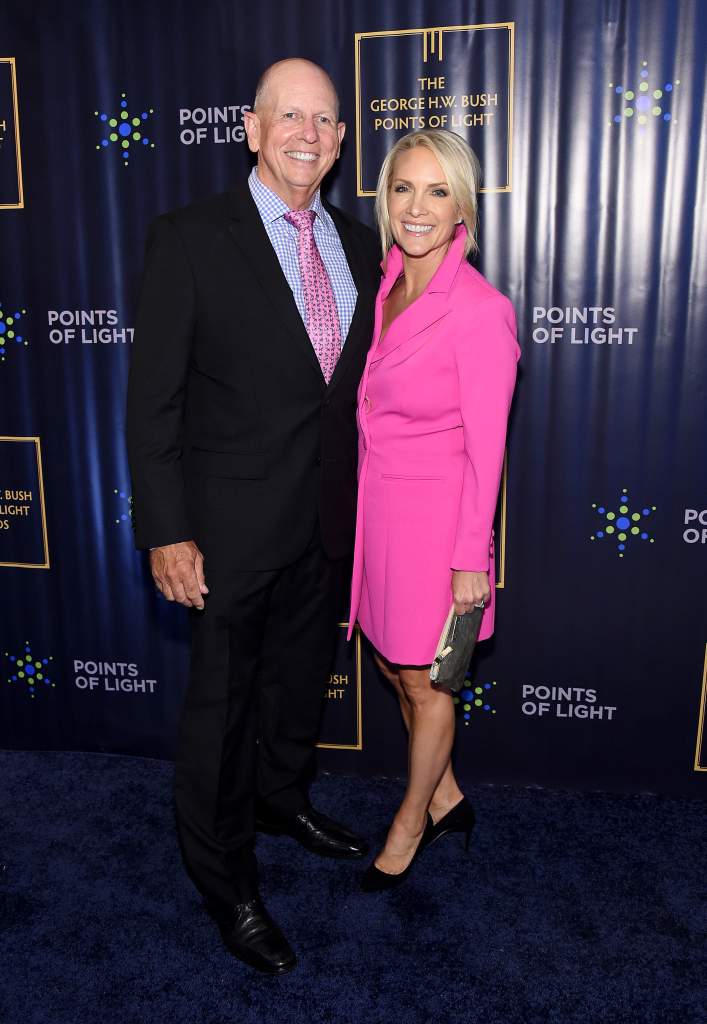 GettyPeter McMahon and Dana Perino in 2019 in New York.

Perino, 50, has been married to her husband, Peter McMahon, since 1998, Heavy previously reported. McMahon, who is about 18 years older than Perino, is a businessman from the United Kingdom.

The couple met in August 1997 when they were seated next to each other on a flight from Denver to Chicago, she recalled to the Hudson Union Society . She explained that she had been feeling frustrated about the dating pool in Washington, D.C., where she was living at the time, and had prayed for help.

She and McMahon spoke throughout the flight and Perino found herself attracted to him. She said during the 2016 interview that as the plane landed she thought to herself, “OK, Lord, I know I asked you to help me find somebody, but he lives in England, he’s 18 years older than me, he’s been married twice before. Did I mention he lives in England? This cannot possibly be it!”

The attraction couple ended up dating. Perino moved to England and they eloped about 11 months after meeting, The Sun reported. Perino’s parents were not aware of the marriage until they visited England a few weeks later, according to the Deseret News.

In 2017, Perino celebrated the 20th anniversary of their first meeting with a collage on Instagram and wrote, “20 years ago today, I met my husband Peter on an airplane. I can’t believe I almost missed my flight that day! Cheers to 20 years of joy with my love, Peter @mcmahon8919 ❤️✈️ We call it, ‘love at first flight.'”

Perino and McMahon did not have children together but McMahon had children from a previous marriage. In 2007, at age 34, Perino became a stepgrandmother, as the Rocky Mountain News reported, after McMahon’s daughter gave birth to twins.

Thank you so much – catch the tribute to my grandfather here on @CBSSunday – new book out Tuesday. Everything WILL Be Okay 👌 📚 https://t.co/yO3LdfonCp

Perino was born in 1972 in Evanston, Wyoming. Her family moved to Denver when she was still a toddler, the Rocky Mountain News reported.

Perino wrote about her grandparents in her book “Everything Will Be Okay: Life Lessons for Young Women (from a Former Young Woman),” which was published in 2021. In a summary for CBS News, Perino described her grandfather, Leo E. Perino, as a World War II Marine veteran and rancher from Newcastle, Wyoming. She said he taught her how to ride her pony, Sally, and gifted her “first pair of red cowboy boots.”

Perino continued to ride horses throughout her childhood. She explained on Fox News in late 2016 that her grandfather helped her practice barrel racing, and she described herself as a “pretty good horsewoman.” She also recalled attending the National Finals Rodeo in Las Vegas with her uncle and cousin each year.

Perino attended Ponderosa High School in Parker before earning a degree from the University of Southern Colorado in 1994. According to the Rocky Mountain News, she worked as a disc jockey at a country music radio station during college.

3. Perino Credits Her Father for Inspiring Her Love for News

Perino gave credit to her father, named Leo, like her grandfather, for fostering an interest in news and politics from an early age. She told the Rocky Mountain News, “He wanted me to have read the newspapers and to have picked out one or two articles to discuss by the time he got home. And then we always watched the evening news together and my Dad and I would always watch the Sunday shows as well.”

Perino further commented on this tradition in a Fox News op-ed in 2015:

When I was in third grade, my dad started a tradition with me — I had to read the Rocky Mountain News and The Denver Post and choose two articles to discuss with him before dinner. I remember looking forward to that. I’d ask questions about the news and give my opinion, and then my dad would draw me out, making me think through my arguments, challenging me to look at issues from another point of view. He’d gently play the Devil’s Advocate. That started a lifetime love of the news and throughout my teens we would get all the news magazines at the house and we’d dog ear the pages of articles that interested us so that we could discuss them.

Leo Perino explained his reasoning in an interview with Westword in November 2008. “We did that because we would rather talk about events in the world and what’s going on rather than gossip about people at the dinner table.” He added that he wanted his daughters to “be interested in the world around them, locally, nationally and worldwide.”

In the 2015 Fox News op-ed, Perino mentioned that her father “worked in human resources for a life insurance company.”

Perino interviewed her mother, Jan, for a Fox News podcast in 2021. Jan Perino explained early in her professional life, she spent time working in a doctor’s office, the state hospital in Wyoming, and the court system. After moving to Denver, she worked in marketing for a psychiatric hospital

Perino has one younger sister named Angela, who goes by Angie. She turned 46 in March 2022, according to an Instagram post by her mother.

She married Ben Machock in 2012. Angie Perino posted a throwback wedding photo on Instagram in 2021.

Angie Perino followed in her mother’s footsteps with a career in healthcare. According to her LinkedIn account, she has been working at Experian Health for more than a decade as of this writing.

5. Perino Shares Her Love for Her Dogs on Social Media

Perino loves to share photos of her dogs on social media. She currently has a Hungarian vizsla named Percy.

She and her husband adopted Percy in late 2021, as the Deseret News reported, a few weeks after their beloved dog Jasper died of cancer.

Perino wrote a book about Jasper in 2016 titled, “Let Me Tell You about Jasper: How My Best Friend Became America’s Dog.”

After Jasper passed away, Perino wrote an editorial about him for the Fox News website. In the piece, she recalled bringing Jasper on the air on Fox News. “In the days since Jasper passed away, we’ve been buoyed by the outpouring of support from our friends, colleagues, and especially our fans. Jasper was first on “The Five” in June 2012, a tiny puppy that I could easily hold in my arms. I think he slept through that first appearance, but a star was born.”

READ NEXT: Who Was Fox News’ Ainsley Earhardt’s First Husband?