Getty Houston Police and other local agencies will be holding a drill in the city on February 5, 2022.

Houston Police and city officials are warning residents about an upcoming large-scale emergency drill on Saturday, February 5, 2022, featuring law enforcement agencies from around Texas along with military personnel. The Department of Defense and other Houston-area local and federal agencies will be taking part in the training. According to a police press release, the training will continue in the city through February 12, 2022.

The city of Houston said in a statement, “On Saturday, February 5, local first responders from the Greater Houston and surrounding areas will be conducting a large-scale emergency drill located at Westlake Park Campus in the Energy Corridor in Houston. The exercise will last from 8 a.m. to after midnight.”

The city added in a press release from the Office of Emergency Management, “Please expect a large presence of law enforcement and other emergency officials in the area on this day and remember this is only a drill to help us better respond in real-life situations. The public does not need to be alarmed and does not need to contact 9-1-1 during this exercise but can contact 281-414-5418 or Allison.hudson@houstontx.gov for additional questions related to this exercise.”

HPD statement regarding joint training operations in the City of Houston. #HouNews pic.twitter.com/32wdXfLGxA

Houston Police said in a statement, “This exercise has been planned long in advance in cooperation with HPD and local authorities. It is not in response to any current world events and is expected to have minimal impact to our community. Residents may hear noise or see helicopters in the day and evening hours during the exercises. This type of collaborative training between local, state and federal partners is very common as we continue to work to provide the best service to the public.”

A similar joint training exercise was held in Houston on September 24, according to a previous police press release. A KHOU article from September noted that residents took to social media to report seeing helicopters flying at low altitudes during the drill.

A Reddit post from that day was titled, “Anyone else hear that crazy loud plane/whatever it was just fly over Montrose?” The Reddit poster added, “Wondering if anyone saw/knew what that was, shook my entire house and sounded very loud.” Other Reddit posters reported seeing sets of military helicopters flying low. 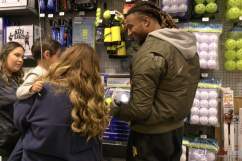 Houston Police added, “To maintain the highest level of security, there are no public viewing opportunities planned during the exercise.” The city’s press release said, “This exercise is NOT open to the public and we ask that you avoid the area during these times.”

Further details about the emergency drill and exercises have not been released. The Houston Police and city OEM press releases did not note when the activities will take place other than on February 5, but said they would continue through February 12. Heavy on Houston will update this post if more details about other days the drill will take place are released.