Usha Chilukuri Vance is a practicing attorney who has been married to author and politician J.D. Vance since 2014. They’re raising their three children in Cincinnati, Ohio.

Vance is best known for his memoir, “Hillbilly Elegy.” The movie version was released on Netflix in 2020.

Here’s what you need to know about Vance’s wife:

Chilukuri works as an associate at Munger, Tolles & Olson LLP. She focuses on “complex civil litigation and appeals in a wide variety of sectors, including higher education, local government, entertainment, and technology,” according to her bio on the firm’s website.

Chilukuri works with the law firm’s San Francisco and Washington, D.C. offices, her profile states. She has been licensed to practice law in California since June 2016, public records on the State Bar of California website show.

She was admitted to the DC Bar in May 2019, the organization’s public records show.

Vance likely works remotely most of the time since she and her family live in Ohio. According to the Supreme Court Of Ohio Attorney Directory, she has been licensed in Ohio since May 2019.

We were blessed with an early Christmas present this year. Everyone please meet Mirabel Rose Vance, our first girl. Mama and baby both doing great, and we’re feeling very grateful this Christmas season pic.twitter.com/SMlpG70tqY

Chilukuri and Vance met while they were both law students at Yale. In a 2017 interview with NBC News, Chilukuri explained she had been attracted to Vance in part because of his positive attitude. “He felt very different,” she told reporter Megyn Kelly.

The couple got married in 2014, according to Chilukuri’s Facebook page.

They now have three children. Their first son, Ewan Blaine, was born in 2017. Vance does not appear to have shared his second son’s name publicly, although he does have a family photo including the two boys on his Senate campaign website.

Chilukuri and Vance welcomed their third child in December 2021. Vance shared on social media, “We were blessed with an early Christmas present this year. Everyone please meet Mirabel Rose Vance, our first girl. Mama and baby both doing great, and we’re feeling very grateful this Christmas season.”

Chilukuri listed San Diego, California, as her hometown on her Facebook page. She attended Mt. Carmel High School, she noted on LinkedIn.

She moved across the country for college. She earned a bachelor’s degree in history from Yale University in 2007.

In 2009, Chilukuri returned to the classroom for a Master of Philosophy degree. She studied early modern history at the University of Cambridge and was selected as a Gates Cambridge Scholar. Her biography on the program’s website explains that she focused on “the career of John Field, a printer who operated between 1642 and 1668 in London and Cambridge” and that her “MPhil project investigated the methods used for protecting printing rights in seventeenth-century England.”

4. She Was a Law Clerk at the U.S. Supreme Court 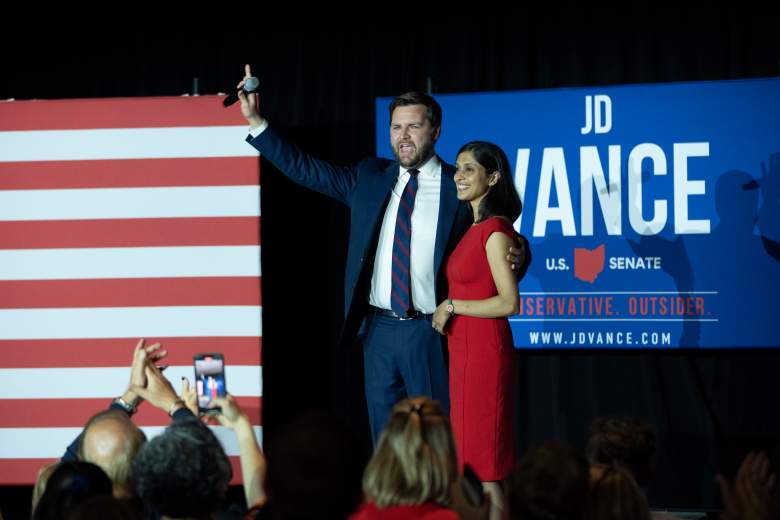 GettyRepublican U.S. Senate candidate J.D. Vance and his wife Usha Vance wave to supporters after winning the primary, at an election night event on May 3, 2022 in Cincinnati, Ohio.

Chilukuri’s legal training included time spent as a law clerk at the U.S. Supreme Court. She served as a clerk for Chief Justice John G. Roberts, Jr. in 2017-2018, according to her LinkedIn profile.

In 2014-2015, she clerked at the United States Court of Appeals for the District of Columbia Circuit. She worked for then-Judge Brett Kavanaugh, who was confirmed to the Supreme Court in 2018, as Heavy reported at the time.

Chilukuri also clerked for Judge Amul Thapar at the United States District Court for the Eastern District of Kentucky in 2013-2014.

5. The Couple Bought Their House in Cincinnati for Nearly $1.4 Million

Chilukuri and Vance are raising their three children in Cincinnati, Ohio, as noted on her law firm bio.

According to a search of online records, including voter registration records in Ohio, the couple bought their house for nearly $1.4 million in 2018.

They told “Columbus Monthly” that they chose Cincinnati because of its proximity to Vance’s family. The magazine wrote of the house:

As for Vance’s new house, it’s a beauty. With a sale price of $1.4 million for the house and five additional small lots surrounding it totaling 2.29 acres, the 4,738-square-foot residence was built in 1867 and was described on Realtor.com as “a rustic example of midcentury Gothic Revival transitioning to High Victorian Gothic.”

Interestingly, the house is located on William Howard Taft Drive, named for an Ohioan from Cincinnati who also went to Yale (Vance graduated from Yale’s law school) before serving as the 27th president of the United States from 1909 to 1913.

READ NEXT: How Wealthy is J.D. Vance? Read About His Net Worth Here