Facebook/Jim Piwowarczyk Bystander videos captured the scenes of the deadly incident at the Waukesha Christmas parade in Wisconsin.

Graphic videos have emerged showing a red SUV plowing into people walking in a Christmas parade in Waukesha, Wisconsin, on Sunday, November 21, 2021, and authorities said at least 60 people are injured and six people have died, including four members of the Dancing Grannies group and an 8-year-old boy.

Waukesha Police Chief Daniel Thompson identified 39-year-old Darrell Brooks Jr. as the suspect in the incident during a press conference on November 22. He said Brooks had been involved in a “domestic disturbance” not long before he is accused of driving into the holiday parade route. While there were initial reports of more than one suspect, Thompson said on Monday that Brooks was alone in the SUV and the incident is not believed to have been an act of terrorism.

NBC News obtained a doorbell camera that showed Brooks “before his arrest pleading for help and telling a resident he was waiting for an Uber.” The man didn’t know he was the parade suspect, and so he made him a sandwich when Brooks told him he was homeless.

Read tributes and find GoFundMe pages for the victims and survivors here. 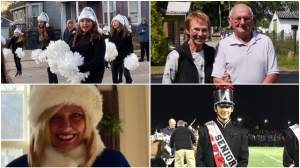 Facebook/GoFundMeSome of the Waukesha parade victims and survivors.

You can see some of the videos below; others appear to show dead bodies lying in the street.

Multiple local residents who were there or had loved ones in the popular Christmas parade told Heavy that a red Ford Escape drove about a mile down the parade route, mowing people down. There were also reports of gunshots as people frantically ran into local businesses to get to safety. Although witnesses at the scene thought the gunfire came from the SUV, Thompson said he doesn’t believe shots were fired from the SUV, telling local journalist Kristen Barbaresi that “officers tried to stop the threat.”

Shawn Reilly, the mayor said, “Tonight was a traumatic situation for the City of Waukesha. We don’t have all the details.”

The chief said that at 4:39 p.m., a red SUV “drove into our Christmas parade. … More than 20 individuals were injured.”

He said the Waukesha police department has “recovered a suspect vehicle. It’s an ongoing investigation. The victims were transported from the scene via ambulance. Officers transported some of the injured people and took them to the hospital. It’s a very tragic incident. Very chaotic. There are no other threats involved.”

Read the criminal complaint against Brooks here. It describes how two detectives tried to stop him to no avail.

They said he was driving 25 miles an hour and “had no emotion on his face” as he accelerated. He could have made a right turn out of the parade route but instead began to “rapidly accelerate” into the crowd of parade participants, the complaint says. The officer believed “this was an intentional act to strike and hurt as many people as possible…He observed the vehicle appeared to be intentionally moving side to side, striking multiple people, and bodies and objects were flying from the area of the vehicle.”

A witness told police the SUV drove in a “zig zag motion. It was like the SUV was trying to avoid vehicles, not people. There was no attempt made by the vehicle to stop, much less slow down. Another witness aid he felt it was a “direct intent to hit as many parade participants.”

A Man Said the Truck, Which Was Captured on a Video From Above, Came a Foot From His Son

WARNING: GRAPHIC CONTENT – Jodi Singsime and her teenage son, Jaden, were eyewitnesses to the SUV that plowed through a Christmas parade in Waukesha, Wisconsin. The family describes the scarring incident as it unfolded https://t.co/wY8RHwxdUi pic.twitter.com/5WE82YKr2G

One man’s son was almost struck by the truck, and he told Heavy “it looked like a war zone.”

“We just heard screaming up the parade route and looked over, and the red jeep or SUV came barreling through,” Michael Hurst, a woodworker from Waukesha who said his son was almost hit by the truck, told Heavy in a phone interview. “I pulled my son away. He probably got missed by about a foot. There was a little kid next to us that got hit. I did see dead bodies. The amount of people who are going to be dead from this, it might even be worse than that Las Vegas shooting. They have a whole block of Main Street that is casualties. We did hear that there were active shooters. We don’t know where that came from or if that’s true. The police pulled me into a building and said to stay in there, get in there, there’s active shooters. One officer told us they did stop the active shooters. My son was out in that street grabbing candy.”

He added: “At that moment I thought just to grab my son and family and get them on the curb. It was 100% intentional.” He believes the truck drove through the parade for about a mile. “I saw a young boy get hit. He was still alive. He was in a lot of pain. I am pretty sure he was going to have broken legs. I did see another guy who was laying in the street. I guarantee he was dead. There were about 20 ambulances coming and going. It looked like a war zone down there.”

The abandoned SUV was later located by police officers in a driveway, according to scanner audio. An officer said on the police radio that a bullet struck the windshield but there was no evidence anyone inside the vehicle was hit.

A woman wrote Heavy, “(A relative) lives in Waukesha, a black guy with dreads knocked on her door shortly after the incident at the parade. She wouldn’t let him in and he proceeded to go across the street trying to break into a building. My daughter called 911 with a description and they said they think he was driving the SUV that drove into all the people.” Police have not confirmed the suspect description, but they did describe the suspect as possibly being a “Black male” on the scanner.

You can see a red SUV speed right past these band members, hear screams and then a law enforcement officer running. @fox6now pic.twitter.com/8lO5oRuP1I

This live video above may have captured the vehicle, screams and a law enforcement officer running. Officers were frantic, yelling, even screaming on the scanner, which you can listen to later in this article.

Here’s another video of the red vehicle.

BREAKING: First video of a red Ford Escape breaking through barriers after mowing down parade goers and firing rifle into crowd in Waukesha, WI pic.twitter.com/QHDi2fsKDz

This horrific video shows bodies lying on the ground as people rush to help. “Oh my God!” a woman screams repeatedly in it.

Another video showed a young man helping his grandpa to safety in a truck. “There’s shots fired now, guys,” he says in the Instagram video as kids cry in the background. “It’s f****** chaos. That was the worst thing I’ve ever seen in my life.” A man wails, “What is wrong with the world right now?” Be forewarned that the video contains graphic language and is very disturbing.

Waukesha is a suburban city in a conservative, affluent county next to Milwaukee County. Wisconsin has been riven with divisions recently over the Kyle Rittenhouse acquittal in Kenosha, which is about an hour away from Waukesha.

Kaylee Staral, whose Twitter page describes her as a business reporting intern with the Milwaukee Journal Sentinel, wrote on Twitter, “UPDATE: A car just ran through the middle of a downtown Waukesha parade. Multiple people on the ground injured.” She wrote that police were shouting that 30 people were injured.

At the Waukesha Holiday parade and a car just broke through the police line, plowing through pedestrians and firing rounds out the window. Family and I are safe. Happened 20 feet in front of us.

According to archived scanner audio, at 4:39 p.m. a police officer could be heard on the radio saying, “There’s a car going westbound approaching the parade course. A red Escape. Black male. I couldn’t stop him. He’s going westbound blowing his horn.”

Another police officer said a “maroon Ford Escape just blew by me White Rock and Hartwell heading toward the parade route.” About a minute later, an officer called for help and said, “Sounds like a car sped through westbound Main” and said people had been “ran over” with “multiple casualties,” calling for multiple ambulances to respond.

A frantic officer then got on the radio and said, “We have about 10 to 15 people down in the street. … We need all available units to the downtown.” He then got back onto the radio and yelled, “I’ve got about 30 people down.” The officer then corrected himself, saying there were 40 casualties down Main Street. Another officer said a woman was not conscious and not breathing. “Casualty” refers to both injured and deceased victims.

“Alert all the hospitals,” an officer yelled.

Listen to the archived scanner audio here. The second one captures the aftermath.

Police were still searching for the vehicle and suspect as of 4:47 p.m., according to an officer’s radio transmission. He said they were looking for a red Ford Escape SUV with “heavy front end damage” heading southbound away from the parade. Another officer said he had fired shots at the SUV when it was driving through the parade area

Heavy spoke to multiple people with loved ones at the scene.

“Just talked to (a friend) – she said she saw bodies flying. They were shoot(ing) out the windows as they drove through, running people over,” a woman whose friend was there told Heavy, asking not to be named. Her friend wrote her, “ppl driving through parade hurting people.”

Kaylee Staral, the reporting intern, wrote on Twitter: “Police shouting at least 30 people down and that shots were fired.”

READ NEXT: Read About Joseph Rosenbaum