Lindsey Vonn competed in the 2018 Winter Games in PyeongChang, South Korea, but did not take home a gold medal. As the most decorated female ski racer of all time, Vonn has earned two Olympic medals (one gold and one bronze) in previous Olympic Games, and has also won 78 World Cup events.

Over the years, Vonn’s personal life has been scrutinized by the media. Perhaps her most controversial relationship was with pro-golfer Tiger Woods back in 2012. Since their split, she has dated Alexander Ludwig and Kenan Smith.

1. She Went Public With P.K. Subban at the CMT Music Awards

Lindsey Vonn and P.K. Subban made their official debut as a couple on the red carpet at the CMT Music Awards in Nashville, Tennessee, on Wednesday, June 6.

The 33-year-old skier and her 29-year-old beau have been dating for at least a couple of months now. It’s believed that they started dating some time after the Olympics, as Vonn was in PyeongChang as a single woman, according to her Twitter account.

“So apparently it’s Valentine’s Day… I forgot all about it because I’m at the #Olympics and I’m single. Anyone else out there single and want to be my valentine?” Vonn tweeted.

In April, Vonn was spotted cheering on Subban during a Stanley Cup Playoff game in Nashville. After Nashville was eliminated from the Stanley Cup Playoffs, Vonn and Subban kept their mutual love of sports alive by taking in Game 7 of the Cavaliers-Celtics series last month.

Tomorrow is thanksgiving so before my family gets here I want to take the time and give thanks. Even though I'm injured, again?, I have so much to be thankful for; incredible friends, an amazing boyfriend, my family and a lot of loyal supporters. With my Uncle's passing it reminds me even more to appreciate what we have in life because you never know what the future holds. I hope everyone has a wonderful turkey day! With love❤️, lindsey

Vonn started dating Kenan Smith in 2016. She made their relationship Instagram official in November of that year, posting the above picture collage. Over the next 12 months, the two made several public appearances together, attending the Pirates of the Caribbean premiere in May and heading to Paris for the French Open the following month.

Vonn and Smith, a former assistant coach for the St. Louis Rams, really seemed to have something special, and would often pack on the PDA when there were cameras around. Their love fizzled, however,  and they decided to go their separate ways after a year.

With Vonn gearing up for the 2018 Olympics, her hectic schedule may have been the relationship’s ultimate downfall.

“Unfortunately, their busy schedules ultimately took a toll on the relationship. It was amicable and they are still friends. Lindsey is laser-focused on her training for the upcoming Olympics and is leaving the country for several months to start competing,” a friend of Vonn told People Magazine in November of last year.

It is unclear how frequently the two still talk, but Vonn didn’t delete any of her Instagram photos of the two of them.

3. She Casually Dated Alexander Ludwig in 2016

In April 2016, Vonn was spotted out and about with Alexander Ludwig, an actor known for his role on the television series, Vikings.

Early in the month, Vonn and a then-23-year-old Ludwig were seen leaving popular West Hollywood eatery, Craig’s. Although Vonn insisted that the dinner was casual and that there was nothing romantic going on, the two ended up looking more and more like a couple over the next few weeks.

According to Page Six, Vonn and Ludwig took in a Clippers game at the Staples Center in Los Angeles on April 27. Although they didn’t hold hands or kiss, the two did appear flirtatious.

TMZ caught up with Vonn shortly after she and Ludwig started seeing each other, but she didn’t give too much away. Check out the video below to see what she had to say.

When Vonn first went public with pro-golfer Tiger Woods, people simply couldn’t stop talking. Although it had been years since Woods was outed as a serial cheater (he was married to Elin Nordegren at the time), people were still wondering what Vonn could have possibly seen in someone like him. Nevertheless, she pursued the relationship and fell in love.

The two met at a charity event in 2012 and hit it off right away. Their romance was red-hot and they got serious fast. In fact, it was only a matter of time before Vonn met Woods’ children, Sam and Charlie (their mom is Elin Nordegren), and was even spotted out and about with them, seeming to take on the role of “stepmom” with ease.

In 2015, however, things started to go south. While there have been rumors that Woods cheated on Vonn, she blamed their hectic work schedules, and doesn’t appear to have any hard feelings toward her ex.

“I mean, I loved him and I still love him. I had an amazing three years with him. Sometimes things just don’t work out and unfortunately it didn’t work out for us. But I don’t have any regrets and I think we’re both in a pretty good place,” Vonn told CNN in 2015, just months after the split. 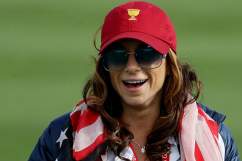 5. She Was Previously Married to Thomas Vonn

Lindsey Vonn met Thomas Vonn, also a skier, when she was just a teenager. The two were introduced to one another at the Olympic Games in Salt Lake City in 2002. At the time, Lindsey was 17 years old — and Thomas was 26. The two ended up falling in love and planned to get married, which upset Lindsey’s dad greatly.

“As a father, as a parent, you want to protect and guide your children,” Lindsey’s dad, Alan Kildow, told Sports Illustrated.

Lindsey and Thomas Vonn got married in September 2007, in Deer Valley, Utah, and her dad wasn’t invited to the wedding. The marriage caused such a rift that Lindsey and her dad didn’t talk for several years.

“It is with great sadness that I announce that Thomas and I have begun divorce proceedings… This is an extremely difficult time in my personal life and I hope the media and my fans can respect my need for privacy on this matter. I will continue to be coached by the U.S. Ski Team and look forward to competing the rest of the season,” Lindsey Vonn said in a statement at the time.

At the time, things were tough for Lindsey, so she picked up the phone and called her dad.

“He’s a lawyer; he’d been through a divorce with my mom. I knew the direction I was going to follow. But I needed help. So I called him. It was a difficult first conversation, but we kind of worked past everything. He apologized. It’s going to take a long time to build a relationship back, but it’s definitely come a long way since that first call,” Vonn told the New York Times in 2012.

Lindsey and Thomas’ divorce was finalized on January 9, 2013. They didn’t have any children together. 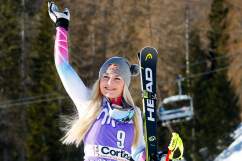