Lindsey Vonn is the most decorated female ski racer in the history of the sport. Over the course of her wildly successful career, she has earned two Olympic medals (one gold and one bronze) and has won 78 World Cup events.

She is now ready to compete in the 2018 Winter Games in PyeongChang, South Korea. This trip to the Olympics will be her fourth, as she has competed in 2002, 2006, and in 2010. She was forced to withdraw from the 2014 Winter Olympics in Sochi after suffering an injury to her right knee.

Vonn was born in St. Paul, Minnesota, on October 18, 1984. Her parents, Alan Kildow and Linda Lund, and her four siblings, Karin, Reed, Dylan, and Laura, moved to Vail, Colorado, in the late 90s. Her parents divorced in 2003.

1. Her Late ‘Grandpa Don’ Taught Her How to Ski & She Is Dedicating Her 2018 Winter Olympics Performance to Him

Dear Grandpa, I still can’t believe you’re gone. No words can describe how much you mean to me and how much i love you. I wish i had more time with you but i will cherish the memories we had. You taught me to be tough, to be kind, and above all, to ski fast. Now, every time i ski down the mountain I know you’ll be there with me. I’m proud to be your granddaughter and I will think of you always. I will race for you in Korea and I will try as hard as I can to win for you. Please look out for me. I love you Grandpa. Lindsey

Lindsey Vonn is dedicating her 2018 Winter Olympics performance to her grandfather, Don, who passed away in November. He was 88 years old.

“Don was stationed in Korea for two years during the Korean war, building roads as part of the Army Corps of Engineers. When he returned to Wisconsin, he built the area’s first ski hill, where he taught his family — including Vonn — how to ski,” Yahoo! Entertainment reports.

“Now that the Olympics are coming up, it’s kind of a trip down memory lane. We’re talking about where he was stationed. It’s actually pretty close to where I’m going to be racing, so it’s really nice for me to actually talk about his stories with him now, and I’ve learned a lot,” Vonn shared during an interview with Mike Tirico in August.

At the time, Vonn had tried to work out every last detail to bring her grandfather to South Korea with her. Sadly, he passed away three months before the Olympics were scheduled to begin.

“If it wasn’t for my grandfather I wouldn’t be racing. My grandfather taught my father how to ski. It’s because of him that it is in our family. It was a huge loss to me and my family. I think about him all the time, especially when I’m racing. And I feel closer to him when I’m skiing,” Vonn told CNN’s Alpine Edge last month.

“I think about the loss of my Grandpa every day, but today I miss him more. I wish he was here with me. I wish he could watch me in the Olympics in S Korea where he served in the war. I just wish he was here. I want to make him proud,” Vonn tweeted on February 1.

2. Her Dad, Alan Kildow, Was Also a Skier & Competed When He Was Younger

Alan Kildow will likely be with Vonn in South Korea, cheering her on as she hits the slopes in her quest for gold.

Vonn’s father was also an avid skier, and competed in ski-racing when he was a teenager. His career came to an abrupt halt when he injured his knee at the age of 18. At the time, he had been training with the Austrian national ski team. Prior to his injury, Kildow had won three U.S. junior championships. His love of the sport didn’t stop, however, and he passed that passion onto Vonn.

Kildow started teaching Vonn how to ski when she was just 2 years old. When she was 6, her dad brought her to a place called Buck Hill near Burnsville, Minnesota, and had her train with his former coach, Erich Sailer. Sailer is very well-known in the sport, and was inducted into the U.S. Ski and Snowboard Hall of Fame in 2005.

“I was really inside, kind of tippy, but he just let me keep skiing that way. He’d say, ‘This is the way you’re going to be fast,'” Vonn told Sports Illustrated in 2008.

Kildow is a lawyer. In 2017, he was listed as a partner at Briggs and Morgan in Minneapolis, Minnesota.

“Kildow concentrates in the prosecution and defense of complex commercial litigation, with an emphasis on disputes arising out of banking and insurance transactions. He has represented banking, insurance, and other Fortune 500 clients in civil and class actions involving antitrust, RICO, lender liability, fraud, breach of fiduciary duty, breach of contract and deceptive trade practices, among other disputes. He also represents banking and insurance clients in investigations, enforcement proceedings, and civil litigation with regulators and attorneys general,” reads his bio on the Briggs and Morgan website.

3. Her Dad Didn’t Speak to Her For 6 Years After She Married Now-Ex Thomas Vonn

Unfortunately there’s too much snow for a downhill race here but hopefully we can still pull of 2x Super-Gs this weekend. I’m happy that I got another day to ski with my Dad though…it looks like Grandpa is shining down on us. We miss you ❤️??

When she was just 17 years old, Vonn met former U.S. alpine ski racer Thomas Vonn, whom she fell in love with. Thomas Vonn was 26 at the time, and the nine-year age difference was something that greatly bothered Lindsey’s dad.

Thomas and Lindsey tied the knot in September 2007, despite her dad’s concerns. Lindsey didn’t invite her father to her wedding. Her grandfather, Don, walked her down the aisle. She didn’t speak with her father for several years.

“As a father, as a parent, you want to protect and guide your children,” Kildow told Sports Illustrated.

Four years later, Thomas and Lindsey decided to divorce. Without a prenuptial agreement, things got complicated and Vonn needed advice. She decided to call her dad.

“He’s a lawyer; he’d been through a divorce with my mom. I knew the direction I was going to follow. But I needed help. So I called him. It was a difficult first conversation, but we kind of worked past everything. He apologized. It’s going to take a long time to build a relationship back, but it’s definitely come a long way since that first call,” Vonn told the New York Times in 2012.

4. Her Mom, Linda, Had a Stroke During Childbirth

Vonn is very close to her mom, Linda, who is a lawyer, like Vonn’s dad.

Linda had a stroke while giving birth to Vonn. In a 2010 interview with the New York Times, Lindsey Vonn’s mom revealed that 75 percent of people die from the type of stroke that she suffered.

“A lot changed quickly, that’s for sure. But a lot did not change. I went back to work. I had four more kids, including triplets. It was a busy house.”

After the stroke, Linda struggled with balance issues, and that’s something that she was still struggling with years later.

According to a 2013 report by USA Today, Linda still has “problems walking and difficulty with balance.”

Years after her divorce from Alan, Linda found love again and got remarried to Vonn’s stepdad, Todd Lund.

“My mom is really tough. I mean, she had a stroke when she gave birth to me. I’ve never once heard her complain about it. She always taught me, no matter what the situation, I can overcome it. My mom is optimistic no matter what, and I think some of that rubbed off on me,” Vonn shared in her Procter & Gamble’s “Thank You, Mom” campaign, which you can watch below.

Ringing in the new year with these 2❤️ #sisteract

“When I look back on it. I say, ‘Wow, I can’t believe we did that,” Vonn’s mom, Linda, recalled in a 2008 interview with Sports Illustrated. Vonn has never forgotten the sacrifice that her family made for her and is eternally grateful for her family’s support.

“It was hard for them. Vail’s a really tight community. There aren’t that many kids there. It wasn’t an easy adjustment,” Vonn told the outlet. Her dad disagrees.

“Living in Vail is not a sacrifice. Vail is where the world comes to enjoy a good time. I don’t think there was any sacrifice. Her brothers and sisters were all members of Ski Club Vail, one of the finest in the country. No, it was a wonderful adventure that I think everybody enjoyed,” he told Sports Illustrated.

Vonn is very close to her sister Karin, and leaned on her for support when she was going through her divorce.

“I had been confiding in my sister Karin, and she was helping me decide what to do with my life,” Vonn previously told the New York Times. 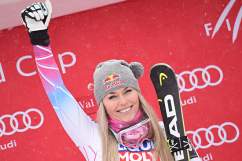 Lindsey Vonn’s Boyfriend: Is the Alpine Skier Dating Anyone?