The Atlanta Falcons are slowly, but surely coming to terms with free agency players. On Monday, the Falcons announced they have agreed to terms on a one-year deal with defensive end Steven Means.

We have agreed to terms with DE Steven Means. 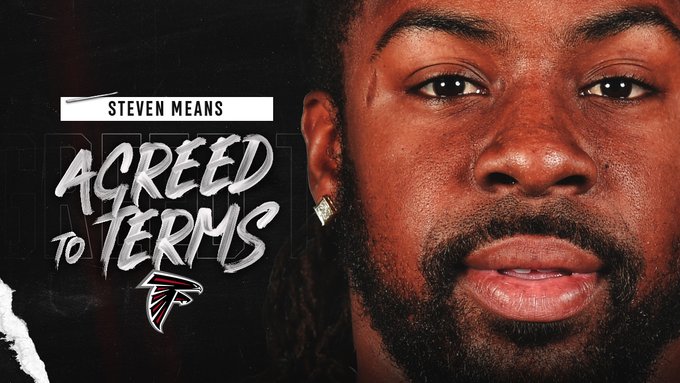 Means was re-signed in 2019 but suffered an Achilles injury in training camp that caused him to miss the entire 2019 season.

Shortly after being waived by Tampa, Means was signed to the Baltimore Ravens’ practice squad. He appeared in one game in the 2014 season. Tampa released Means with an injury settlement in 2015 after he suffered a sports hernia early in the season.

Once he was healed, the Houston Texans signed him to their practice squad briefly until the Eagles picked him up. In 2016, Means had a promising preseason, so the Eagles decided to retain him. Means recorded his first tackle since his rookie campaign. After three weeks of being active, Means was placed on the inactive list. In week 7, he was active again where he recorded his first career sack against the Minnesota Vikings.

In 2017, Means agreed to a one-year contract extension with the Eagles. The Eagles defeated the Patriots 41-33 to win Super Bowl LII that year and Means played a part in that win. At the beginning of the 2018 season, the Eagles decided to release Means.

The Falcons quickly added Means to their roster. He played in eight games with four starts where he recorded 14 combined tackles and one sack. He signed a one-year contract extension with the Falcons and then suffered a season-ending injury.

The Falcons are in need of reconstruction with their defensive line this season and have to get creative with their tight salary cap. Falcons general manager Thomas Dimitroff insists it’s a possible task to still get the best talent with their limited cap space.

Here is an updated list of the players who are set to hit free agency March 18th:

With Means, the Falcons get the best of both worlds—getting away with a minimum contract and top talent. He had a pretty solid season in 2018.

Once Means is 100% percent healthy again, there’s no doubt he will be starting and making a positive impact on defense.

READ NEXT: Falcons GM Responds to Belief Team Is in ‘Cap Hell’