He’s still an avid Vikings observer and recently told the Pioneer Press’ Chris Tomasson what he thinks of the state of the Vikings offensive line.

‘I Think They’re Right In the Middle of the Pack’

Tice said that he felt the Vikings offensive line is “right in the middle of the pack,” but there are some major issues that could quickly unravel in a game.

“This line is built for the run game,” he said Monday. “The key to the Vikings’ success in their offensive line is: Are they going to be able to run the ball but still be able to throw the ball when they have to drop back?”

That’s a big-if as this is the first season in coach Mike Zimmer’s career where the offense has been questionably better than his defense. If the Vikings fall behind early, the line will have to adjust to pass protection.

Vikings O-Line Has One Advantage 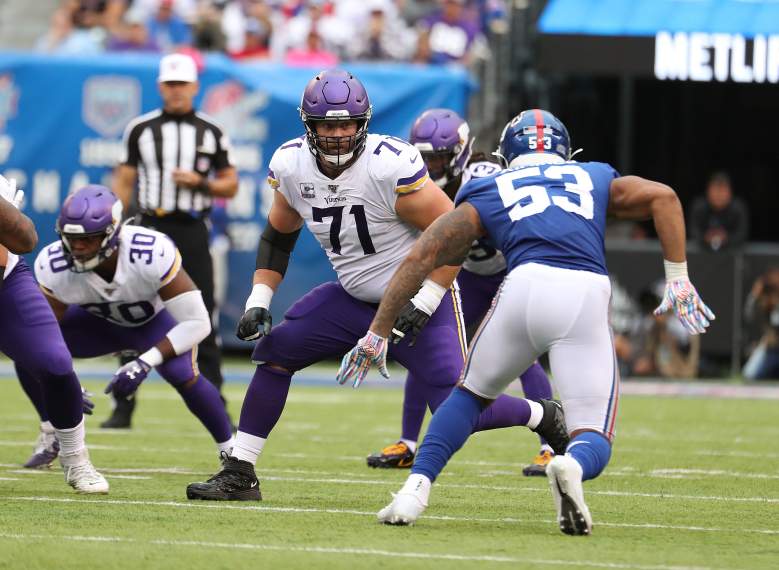 In a season where many teams have not had the same in-person reps and working cooperatively — both imperative among offensive linemen — the Vikings do have an advantage over many teams in bringing back four of their five 2019 starters.

Riley Reiff returns for his fourth year as the team’s starting left tackle, although he is a right tackle by trade and was rumored to move inside to guard as rookie Ezra Cleveland progresses into the left tackle position at the NFL level.

“Is he able to hold up against an elite pass rusher, say, six to eight games a year, if the Vikings are not playing with the lead and they have to throw to stay in the football game,” Tice said. “I’m not sure that can happen.”

Second-year center Garrett Bradbury, third-year right tackle Brian O’Neill and Pat Elflein, entering his fourth season and first year at right guard, round out the Vikings returning starters on the line. Dakota Dozier and Aviante Collins are competing for the left guard spot — Dozier appears to have the advantage.

Tice: Cleveland Will Start By the End of the Season

In a normal NFL season, Cleveland would have been pushing for a starting spot on the line by Week 1, Tice said. Cleveland is currently on the second-team offensive line but Tice called that it’s likely he makes the jump at some point this season.

“I think when all is said and done before the end of the season, he could end up being the left guard,” said Tice. “He’s very smart, he’s very athletic, and he’s got good size.”

Pro Football Focus ranked the Vikings’ line at No. 19 in 2019 and expects some regressions this season at No. 23.

Loading more stories
wpDiscuz
0
0
Would love your thoughts, please comment.x
()
x
| Reply
The Vikings line will work if the team can keep ahead of the competition on the scoreboard.