Getty Vikings running back Dalvin Cook has been accused of domestic assault and taking his ex-girlfriend hostage. However, Cook's camp argues it was he who was the victim.

Vikings running back Dalvin Cook talked to the press for the first time this offseason and took the opportunity to clear the waters about his ongoing contract negotiations and threatened holdout.

“I walk in this building with a smile because I love being in Minnesota,” Cook added. “This is where I want to be at. This is what I love to do. I was gonna be here regardless of whatever speculations came up… I’ve been grinding all offseason — hitting the weights, hitting the field, getting better at my craft and at my position.”

Cook also said that whether or not his agent and the Vikings reach an agreement by Monday’s first full-padded practice, he’ll “be out there.”

“I’ll for sure be out there — coaching, cheering, running the ball. I’m out there full-go, a thousand percent,” Cook said. “I’m trying to get better. I’m trying to lead this young group that we got. It’s a hungry group and I like the locker room that we got. We got some guys that bought in and are ready for leadership. I think we can do something special this year.” 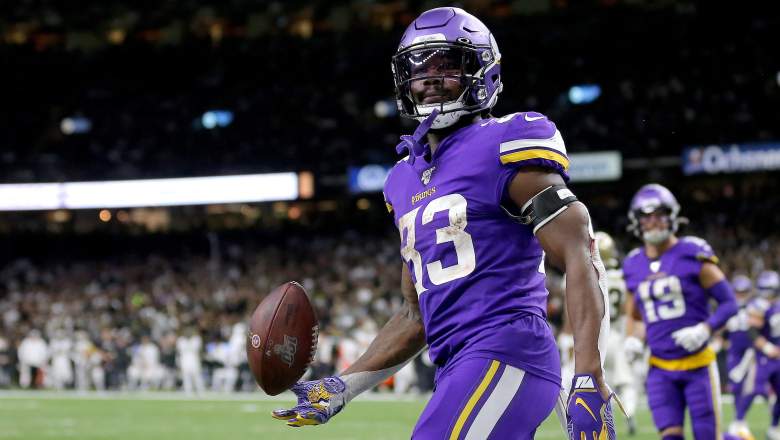 GettyDalvin Cook isn’t comparing himself to other running backs.

Tennessee Titans running back and reigning NFL rushing leader Derrick Henry’s contract extension this offseason set the bar for several running backs who are set to reach free agency next offseason. Henry agreed to a four-year, $50 million contract, or a $12.5 million annual salary.

There’s been debate about Cook’s value is compared to Henry and if he is deserving of an amount similar to him. While there’s been no concrete number that Cook’s camp has publicly asked for, the initial reports of Cook’s hold out was that he was asking for a “reasonable deal.”

Here’s Cook’s response to whether Henry’s deal would be reasonable for him:

Those guys deserve what they got. I never want to compare myself to those guys. I put myself in a category of my own. Whatever my agent and the Vikings come up with that’s reasonable enough for me.

Looking Ahead to Week 1

Despite Cook skipping a portion of the Vikings virtual offseason when the news broke of his threatened holdout, offensive coordinator Gary Kubiak said it wouldn’t affect his readiness.

Cook hasn’t “taken out an insurance policy” of playing without a contract extension and hasn’t entertained the possibility of free agency next year or receiving the franchise tag.

“I think I’m an insurance policy, me, myself,” Cook said. “I’m ready to go. I’m ready to play football. Injuries come with the game, and it’s just how you deal with them. There never was an injury I couldn’t battle back from, and it just comes with it. You’ve got to accept that. I’ve put myself, my body, in the best position to succeed this whole season.”

Cook appears to be full speed ahead for the upcoming season whether he gets a new deal or not, reassuring the Vikings offense will be fully intact this season.

READ NEXT: ‘He Gets Pissed About It:’ Vikings’ Kirk Cousins Lands On Unflattering List