Instagram Are Tiffany and Ronald still together on "90 Day Fiance?"

Tiffany and Ronald Smith, stars of the hit reality series 90 Day Fiancé: The Other Way, are apartment hunting in South Africa on tonight’s episode of the show. So where is the reality couple living right now? Did they stay in South Africa or relocate back to the U.S. after tying the knot?

Fans of 90 Day Fiancé already know that Ronald was denied an American visa due to his criminal history and prior arrests, so Tiffany made plans to move to South Africa to be with him after the two met and fell in love. But did she stay in his home country? She recently gave birth to their first child together, a daughter named Carley Rose, but Carley was born in America while Ronald was back home in South Africa, so fans have been wondering where the two are living today.

Lmao I love him he was saying “look at her!” @avotjie

According to TV Shows Ace, the couple is still living in South Africa, despite Tiffany flying home to give birth in America. Tiffany actually updated fans on her living situation back in June during an Instagram Q&A. According to Tiffany, she and Ronald live in Ronald’s hometown of Randfontein, located in the Province of Gauteng, South Africa. Randfontein lies west of the city of Johannesburg, also known as Jozi, and was once a gold mining town. The city is made up of suburbs, shopping malls, sports clubs and businesses, and is surrounded by homesteads and farms, TV Shows Ace reports.

She told fans that she “loves” Randfontein and hopes to spend the next few years exploring her husband’s country. She said that she has already been on a safari, and when asked about the coolest animals that she’d seen so far, she said she loved seeing the free-roaming elephants in the South African desert.

“I think the coolest was when we were on safari and stumbled upon an elephant not like in America where they are in an enclosure it was roaming free was breathtaking,” she wrote on Instagram without any punctuation. 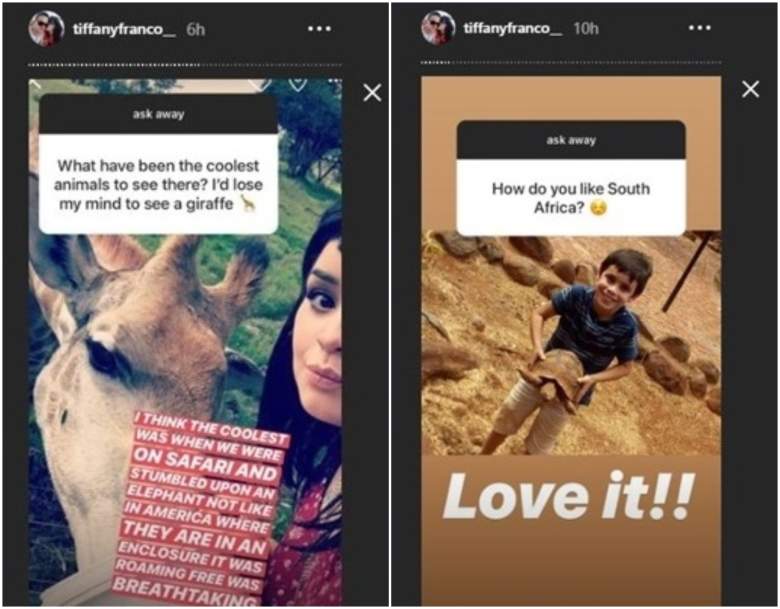 InstagramTiffany answered fan questions about where she lives in South Africa with husband Ronald Smith.

When asked about surfing, Tiffany mentioned that she can’t surf, but she believes Durban or Cape Town would be good places to check out if fans were to visit South Africa. She mentioned that winter is during the opposite time of the year from where she lived in America, but that their winters don’t get as cold as they do in the U.S., according to TV Shows Ace. According to Tiffany, her son Daniel also loves living in Randfontein; she has posted pictures of Daniel in his school uniform on her stories in the past.

Although it looks like Tiffany and Ronald are facing some issues with safety while apartment hunting, the reality star seems otherwise very happy with her new life in South Africa with her husband, son and newborn daughter. Tune in Mondays at 9/8c on TLC to catch the newest episode of 90 Day Fiancé: The Other Way.

READ NEXT: Ronald’s Visa Update on 90 Day Fiancé: Can He Move to America?