NBC Caitlin Thompson attends the Season 3 Premiere of NBC's "This Is Us" at Paramount Studios on September 25, 2018 in Hollywood, California

Caitlin Thompson is an actress on the NBC drama This Is Us. Her character, Madison Simons, appeared as a minor player in the show’s pilot in 2016 but grew to become a major part of the Pearson family’s circle. Thompson, 33, has appeared in 24 episodes of the series thus far.

Thompson was creative throughout her childhood. The Ohio-born actress told The Italian Reve that she recalled writing scripts and short stories from a very early age.

By her sophomore year of high school, she appeared in a production of The Sound of Music and felt a true connection to acting for the first time. She said her passion is “storytelling and bringing those stories to life, in whatever way that manifests” – and it is certainly manifesting on the Emmy-winning drama she now stars in.

Here’s what you need to know about Caitlin Thompson:

1.Thompson Started Her Professional Acting Career in 2008 & Had A Major Flop Early On 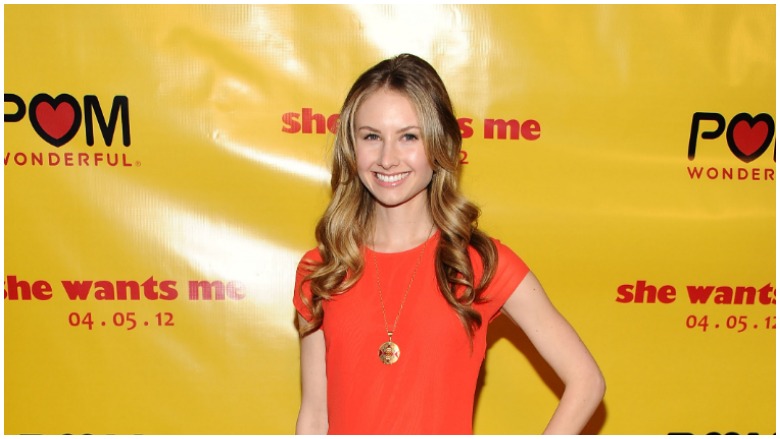 GettyCaitlin Thompson arrives at the ‘She Wants Me’ Los Angeles premiere at Laemmle’s Music Hall 3 on April 5, 2012, in Beverly Hills, California.

Thompson kicked off her career in her early 20s in a series of video shorts, according to her IMDb page. By 2011, she scored a recurring role in the TV series Greek, and the following year she appeared in four episodes of 90210, playing Madison Stewart. Early on, she had a mishap after lying about her prior experience.

“In one of my first big roles, I had to dance a hip-hop routine on a stage in front of hundreds of extras,” she told The Italian Reve. “I am not a dancer. I think I lied on my resume and said I could dance, but no one from production actually checked in with me to verify this. I had only two rehearsals …eight professional backup dancers behind me and it was a disaster. My timing was way off. I looked terrified. I was stiff. I’ll never forget the look of utter disappointment on the director and producers’ faces. I think they ended up using only close-up shots of my face for that one. It was a nightmare!”

Despite the setback, she landed her biggest role in 2016 when she was cast as a recurring character on This Is Us.

2.Thompson’s Role on ‘This Is Us’ Started out as Minor Part & Spawned Into a Main Storyline 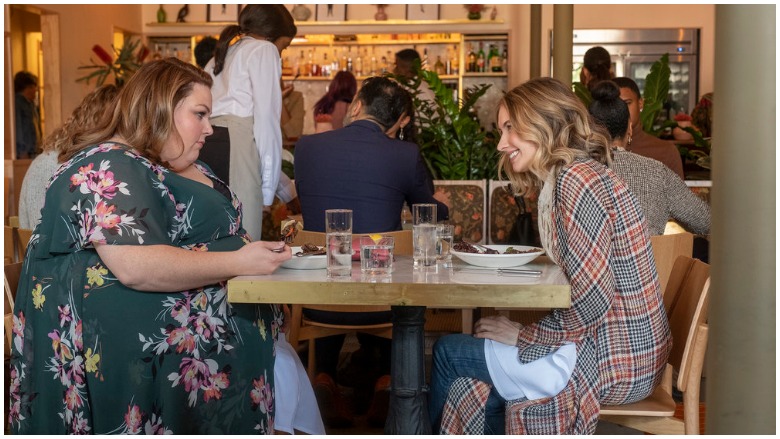 NBCChrissy Metz as Kate and Caitlin Thompson as Madison on ‘This Is Us.’

On This Is Us, Thompson’s character Madison met Kate (Chrissy Metz) and Toby (Chris Sullivan) at a weight loss support group. Their first interaction was tense, as Kate didn’t think Madison should be in the group since she didn’t appear to have a weight problem. They later formed a friendship as Madison confided in Kate about her past with bulimia.

Thompson did a lot of research when trying to create a backstory for her complex character.

“The funny thing about playing Madison is that for many episodes, she was such a small part of the show. Just a few lines here and there in Kate’s support group,” she told the Italian Reve. “But as the role grew, I learned more about her and could dig in deeper. So I guess in the beginning, most of my preparation was filling in the blanks in Madison’s life to create a full character. I also looked into eating disorders and how support groups work.”

She added that when she first started playing Madison, she decided that a lot of her character’s behavior would be driven by her insecurities and her desire to be wanted.

“She just covers those feelings with her big personality,” Thompson said. “I wanted her to be more complex than the cliché rich, L.A. girl.”

3.Thompson Is Married to ‘This Is Us’ Showrunner Dan Fogelman & Their Relationship Got Him Into Hot Water With Fans of the Show

Thompson and This Is Us creator Dan Fogelman have been married since 2015. In 2018, Fogelman posted to Twitter to address a scene in which Madison and Kevin Pearson (Justin Hartley) got flirty at Kate’s wedding, and he shut down speculation that they would hook up.

“Just FYI: Madison is my wife in real life @CaitwithaC and if you thought I was letting her sleep with @justinhartley on national television you’re nuts. #ThisIsUs,” he wrote.

But two years later, viewers found out that not only did the characters eventually sleep together, but Madison ended up pregnant with twins from their one-night stand. On social media, Fogelman received backlash from fans — many of whom hate the Kevin and Madison storyline – as they called him out for “lying.”

In an interview with Entertainment Weekly, executive producer Isaac Aptaker took the blame for the switched-up plan for Madison and Kevin and revealed that the show’s creative team wore the showrunner down.

“We’ve just been slowly wearing Dan down since he tweeted that!” Aptaker said. “It took, what, two and a half years, and we did it. It’s something we’ve talked about and had in our heads from early on. There is a different component to Dan that I can’t speak to of what it’s like to put your wife in that situation.”

4.Thompson Welcomed Her First Baby in 2020 After Keeping Her Real-Life Pregnancy Private

Off-camera, the actress had her own baby in 2020, but many fans didn’t even know she was expecting. In August, Thompson shared a photo on Instagram as she held her newborn son.

“Two and a half months of baby bliss. Hey world, meet Benjamin,” she wrote.

The new mom was also excited to see her character’s pregnancy journey unfold and explore a new side of Madison, even if some of her storyline had to be changed around due to the real-world pandemic.

In a press call, Fogelman said viewers were supposed to see more of Madison’s interaction with her obstetrician, Eli (Josh Hamilton), and his horse-loving daughter at the beginning of season five, but the script was changed due to the global health crisis.

“That’s one of the few things that we had to change a little bit,” Fogelman told reporters, according to Deadline. “It’s complicated, as I had a baby during this period in quarantine, and it really changes what doctor appointments look like and feel like.”

5.Thompson’s ‘This Is Us’ Character May Not Be Part of the Show’s Finale, Based on Teasers From the Producers & Previously Shown Future-Set Scenes 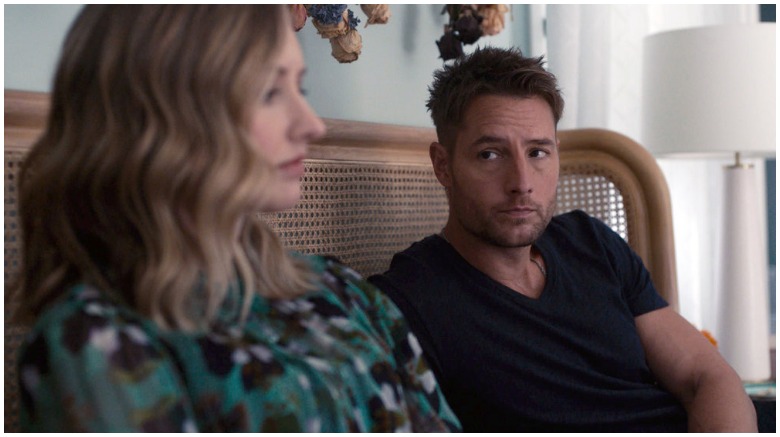 NBCCaitlin Thompson and Justin Hartley in a scene from ‘This Is Us.’

Thompson’s character is currently engaged to Kevin after he promised to be “all in” for her and their twins, but flash-forwards already revealed to viewers of the time-jumping drama series have not shown her to be in the picture in the future.

Fogelman told reporters that Madison and Kevin won’t have “an easy love story” like some of the other love stories on the show have been.

“So, it’s fair to say they have an up-and-down journey ahead of them,” he added,

In addition, in an interview with The Hollywood Reporter, Fogelman teased that his real-life wife may not be with Kevin in the end.

“I think that there’s basically many more chapters in Kevin’s romantic story,” he said.

Thompson told ONTV Today that while her husband likes to keep her in the know on storylines for the show, she doesn’t always want to know spoilers. It’s possible that she may not know upfront what will happen when the series ends.

“I like watching it as a fan if I’m not in the episode,” she said of This Is Us. “As much as I like to be supportive, I don’t want to know until I watch.”

READ NEXT: ‘This Is Us’ Update: Will There Be a Season 5?