Vinny Guadagnino made a shady comment about one of his co-stars. The “Jersey Shore: Family Vacation” star cracked a joke about Angelina Pivarnick’s 2019 wedding to Chris Larangeira which featured a tacky speech delivered by bridesmaids Nicole “Snooki” Polizzi, Jenni “JWoww” Farley,  and Deena Cortese.

In a new interview with Us Weekly, Guadagnino reflected on that doomed day when asked about the “Jersey Shore” cast’s worst dates.

“Angelina’s is her wedding. Her wedding date,” Guadagnino cracked.

While Pivarnick begged to differ – she claimed her worst date took place with a guy who had flatulence while wearing khaki pants— Guadagnino added that his worst dating experience was with a woman who sent back her mojito to the bar – three times.

Nearly one year after Pivarick’s first wedding spawned a major fallout among the female “Jersey Shore” cast members, Guadagnino spearheaded a redo of her nuptials in Las Vegas last fall. Not only did he sport a pink bridesmaids dress as his co-stars did a year prior, but he rewrote the trio’s mean-spirited speech to make it flattering for Pivarnick.

Guadganino started his toast by noting that his costars’ original speech was “a  little bit rocky,” and that he intended to show everyone how it’s “done.”

“Angelina has had three fiancés, three fiancés,” he started out, according to TooFab. But just as “Jersey Shore” viewers feared he was going to poke fun at Pivarnick’s past, Guadagnino finished his sentence with, “Because she’s so beautiful!”

He also paid homage to Pivarnick’s “garbage man” groom by pointing out that garbage men have “a good pension and benefits,” TooFab noted.

Pivarnick was touched by Guadagnino’s sweet words at her second wedding, and during the episode, she even revealed that Guadagnino must really “love” her. 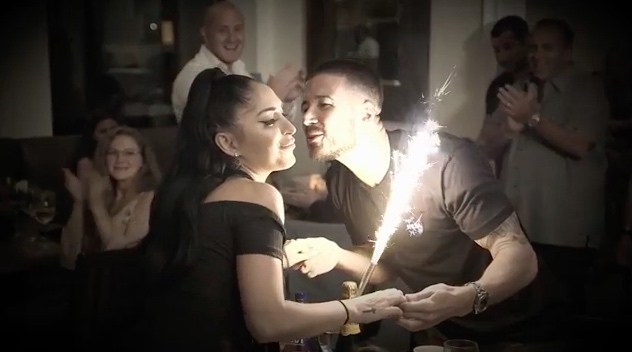 MTV“Jersey Shore” stars Vinny Guadagnino and Angelina Pivarnick have had a flirtatious past.

Guadagnino has seemingly carried a torch for Pivarnick for years, following a hookup during their early “Jersey Shore” days. Not only did he appear to be sad when the Staten Island native wed Larangeira, but he recently reacted to the couple’s rumored marital troubles with a sweet message for his co-star.

“Don’t worry Angelina if it doesn’t work out, you always have me,” Guadagnino tweeted in early June.

It’s not the first time the “Keto Guido Cookbook” author posted a flirty comment about Pivarnick. In February 2020, Guadagnino wrote, “Damn… I really f-cked up,” after Pivarnick posted a sexy Instagram photo of herself, per Hollywood Life. That prompted a response from Larangeira, who called Guadagnino out for posting inappropriate comments about his wife.

“Dam (sic) bro, I know we Eskibros and all,” Larangeira wrote to Guadagnino, according to Hollywood Life. “But you’re becoming a stage 5 clinger.”

Even Pivarnick has joked that Guadagnino is ”obsessed” with her, per MTV. In February 2020, following a flirty pillow fight with her single co-star, she joked, “Dammit — kid’s, like, obsessed with me. Maybe Vinny just cannot find the words to express how much he loves me.”