Lisa Vanderpump opened up about her fractured friendships with her former Real Housewives of Beverly Hills costars.

The wealthy restaurateur quit the long-running reality show in 2019 after nine seasons. Her exit came after she was embroiled in a season-long “Puppygate” scandal involving a botched adoption at her Vanderpump Dogs rescue.

During an appearance on Bravo’s Watch What Happens Live, Vanderpump told host Andy Cohen she has no interest in returning to RHOBH as long as former costars such as Kyle Richards, Lisa Rinna, Erika Jayne, and Dorit Kemsley are still on it. But she did tease one newcomer she wouldn’t mind costarring with— if she can ever find the time in her already busy schedule.

When speaking on WWHL, Vanderpump reacted to the addition of socialite Kathy Hilton to the Real Housewives franchise. Hilton, who is the older sister of Vanderpump’s estranged former co-star Kyle Richards, joined the 11th season of the Bravo hit as a “friend” of the Housewives.

Surprisingly, Vanderpump said the addition of the mom of Paris Hilton is a “positive aspect” to the show she exited. “I love Kathy,” the SUR owner said.

Vanderpump then acknowledged that she is constantly asked if she would ever consider returning to the Real Housewives of Beverly Hills. She admitted that she would be open to working with Hilton.

“It’s been such a long time and I’ve just got a lot going on, you know,” Vanderpump said. “I’ve been writing a book and everything. But I do love Kathy …If you could just get rid of the other five, then I think yeah, there’s a possibility!” 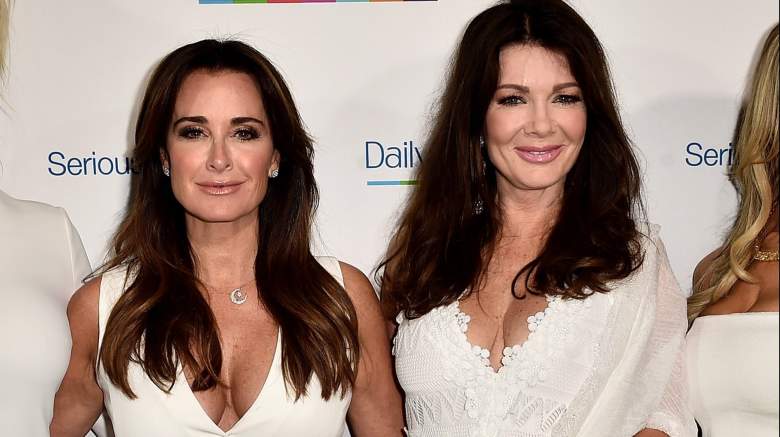 While she is open to working with Hilton, getting Vanderpump to talk to the socialite’s sister is another story. Vanderpump has been in a feud with Richards, who is currently the only original RHOBH cast member still on the show.

In Season 9, Richards famously turned up at Vanderpump’s Villa Rosa estate to confront her about the PuppyGate scandal and accuse her of leaking a story about it to the tabloids. After Vanderpump swore on her children’s lives that she wasn’t involved in a media leak, her husband Ken Todd kicked Richards out of their house with a viral “Goodbye Kyle!”

More than two years later, Vanderpump is still angry that Richards called her a liar.

When asked on WWHL if she would talk to Richards if they were stuck in an elevator together, Vanderpump joked that she would look for the escape hatch and ask Richards if she could use her shoulder to get a boost. She then got serious.

“I think the only thing that can be said is you got to start with an apology,” Vanderpump said, per Hollywood Life.“If someone calls you a liar…it’s not okay with me.”

Vanderpump previously told The Skinny Confidential Him & Her Podcast that she has run into Richards “a few times” while out in Beverly Hills and that her former friend has attempted to say hello to her. But Vanderpump revealed she has no interest in rekindling a friendship with someone who doesn’t have “good intention” for her. Vanderpump said her friendship with Richards wasn’t “authentic.”

“I guess if somebody doubts you when you’re swearing on your children’s life, that’s not an authentic friendship,” she said of her relationship with Richards. “If somebody kind of enjoys your demise, or they don’t make you feel good about yourself, that’s not somebody [you] need around.”