The day has finally arrived and the first issue of Batman/Fortnite: Zero Point is here. With this new comic book, anybody who picked it up has a code to get the new Rebirth Harley Quinn outfit in Fortnite.

With two Harley Quinn styles already in the game, it’s hard to imagine there being much more room for more, but instead of being based off the movies, this one takes inspiration from the comic books.

It’s also not just a simple new style, but it’s a new skin entirely. If you picked up the first issue of this miniseries, it can be all yours. Here’s how to redeem your new skin and start rocking the new Harley Quinn outfit.

How to Redeem Code

Epic GamesThis skin can be all yours.

There are two different ways to get your code depending on how you bought the first issue. If you picked it up physically, then it’ll be as simple as taking the code from inside the comic and redeeming it here.

You’ll just need to make sure you’re logged into the correct Epic Games account because it would be tragic if your skin went to the wrong place. 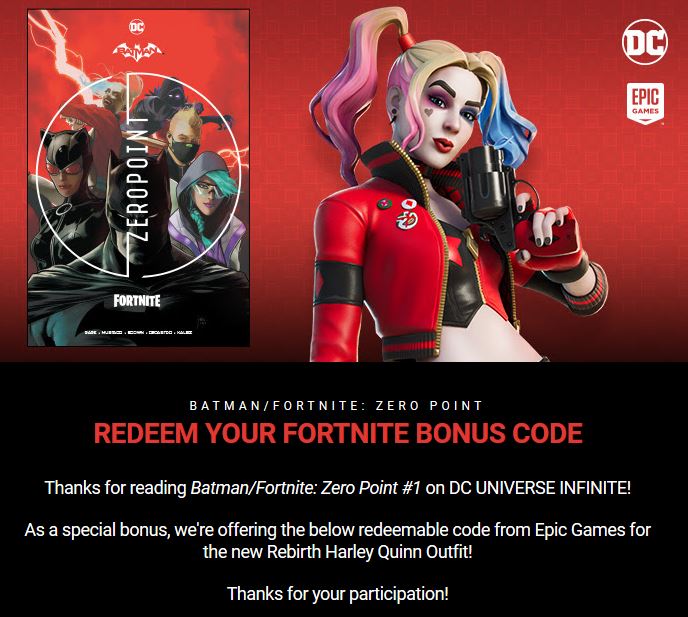 Epic Games / DC ComicsWhat your email will look like.

If you’re a DC Universe Infinite subscriber, then you will be doing things a bit differently. Instead of finding the code in the comic itself, it’ll be sent to the email address associated with your account once you read it in the app.

This can take a few minutes, and once it shows up it’ll come with the code and set of instructions on how to redeem it.

Once you do this, all you’ll have to do is log into Fortnite and you should be greeted with the new skin looking you right in the face. Claim it and it’ll be in your locker waiting to be worn.

On top of the five other issues that have yet to release, there are also new cosmetics to look forward to.

We know that Batman will be getting a new skin and glider, Catwoman is getting a pickaxe and we’ll even be seeing Deathstroke get a glider.

Something that many players are wondering is whether or not Deathstroke will be getting a skin. With him getting a glider, it’s a fair question to ask but nothing has been revealed as of yet.

Keep in mind that with the exception of Armored Batman (for now), every cosmetic that you get by redeeming a code from the comic will also show up in the Item Shop.

Harley Quinn will take a little bit longer to show up, but the pickaxes and gliders will show up on the same day their respective issue comes out. This is a way for fans to not miss out on all of the goodies if they aren’t able to pick up any of this 6-issue miniseries.

If you’re in it for only cosmetics, it might be worth skipping the comic book. If you’re a fan of the lore in Fortnite, then this might be something you want to pick up.

Loading more stories
wpDiscuz
0
0
Would love your thoughts, please comment.x
()
x
| Reply
Here's how to get your Rebirth Harley Quinn outfit in Fortnite.