Michael Nolan, 47, is the suspect in a shooting and explosion that left one Brentwood, New Hampshire, house engulfed in flames, and one police officer dead. The harrowing ordeal occurred Monday evening after police were called to respond to an alleged domestic dispute.

1. Police Were Responding to a Domestic Dispute Call

Brentwood police were called to a situation unfolding at 46 Mill Pond Road, a house in a 55-plus senior living condo community. ABC reports that the neighbors called the police when they heard yelling between Michael Nolan, 47, and his father, Walter Nolan, 86, who owned the house.

The Boston Globe reports that when two officers attempted to enter the home at around 4 p.m., they were met with gunfire. Neighbors reported hearing “rapid gunfire.”

In the shooting, 48-year-old officer Steve Arkell, a 15-year veteran of the Brentwood Police Department, was killed. Continued shooting drove the other police officer out of the house. His name and condition were not released.

A second person was taken to a hospital. It is unclear if this was the second officer or Walter Nolan.

Officer Arkell bravely answered the call of duty and made the ultimate sacrifice, a heroic demonstration of his commitment to the safety of his fellow citizens. Like so many of our first responders do on a daily basis, Officer Arkell courageously put his life on the line to protect others, and in doing so, was tragically taken far too soon.

3. The House Exploded on Live TV

After the shots were fired, the house began to burn. Fire crews were initially kept away from the scene in case of more gunfire.

A WCBV helicopter on the scene caught video of the burning house as it exploded. You can see the video above.

4. Michael Nolan Lived With His Father

The house in Brentwood that was scene of an officer-involved shooting.. blew up. We have vid of explosion on #7news pic.twitter.com/JyV7LxI2oE

According to USA Today, Michael Nolan lived with his elderly father, Walter. An obituary from February 2012 reveals that Walter’s wife, Elizabeth Nolan, died in Boston on February 2, 2012. The article identifies Michael as one of their five children, and the only one who was unmarried.

5. Nolan Is Believed to Have Died in the Fire

The house is collapsing under the flames in Brentwood, NH #7news pic.twitter.com/7rZFE1u1DG

Police believe Michael Nolan was killed in the fire that ravaged his father’s home.

It’s unclear how the fire began. 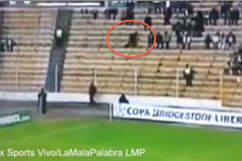