You take a country like Cuba. For us to test the possibility that engagement leads to a better outcome for the Cuban people, there aren’t that many risks for us. It’s a tiny little country. It’s not one that threatens our core security interests, and so [there’s no reason not] to test the proposition. And if it turns out that it doesn’t lead to better outcomes, we can adjust our policies. The same is true with respect to Iran, a larger country, a dangerous country, one that has engaged in activities that resulted in the death of U.S. citizens, but the truth of the matter is: Iran’s defense budget is $30 billion. Our defense budget is closer to $600 billion. Iran understands that they cannot fight us. … You asked about an Obama doctrine. The doctrine is: We will engage, but we preserve all our capabilities.”

Watch the full interview above. 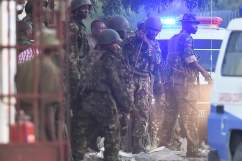