In the video above, Vermont Senator Bernie Sanders speaks out against the Panama Trade Deal, a speech that has become more relevant in recent weeks with the Panama Papers scandal.

Sanders begins by pointing out that Panama puts out only .2 percent of America’s GDP in order to say that a new Panama deal would not significantly help American trade. He then reveals what he believes is the real reason for the Panama Free Trade Deal: its status as a tax haven. He quotes Citizens for Tax Justice on Panama’s tax haven status:

A tax haven…has one of three characteristics: It has no income tax or a very low-rate income tax; it has bank secrecy laws; and it has a history of noncooperation with other countries on exchanging information about tax matters. Panama has all three of those…they’re probably the worst.

Sanders goes on to say that the Panama trade deal will likely make the effort to stop offshore tax evasion even harder, and points out that even trying to stop tax evasion would be a violation of the agreement.

The scandal has been very good for Sanders politically, with several organizations pointing out his prescience and his main rival Hillary Clinton seeing aides implicated in the scandal. The Independent even speculated that the scandal would give him the White House. Sanders has since released a new statement on the scandal:

I don’t think you are qualified if you supported the Panama free trade agreement, something I very strongly opposed, which has made it easier for wealthy people and corporations all over the world to avoid paying taxes owed to their countries. 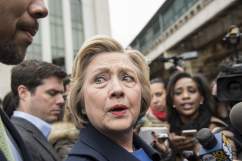 Is Hillary Clinton Implicated in the Panama Papers? Not Directly.

Read More
2016 Presidential Election, Bernie Sanders, Politics
Follow Heavy ↓
Discuss on Facebook
In 2011, Bernie Sanders spoke on the Senate floor against a new trade deal with Panama, which led to financial scandals revealed in the Panama Papers. Click here to watch his statement.