Sasha Obama to Work at Martha’s Vineyard Over the Summer https://t.co/xqONGtYQCv pic.twitter.com/tDjc31aXaS

Sasha Obama, one of President Barack Obama‘s daughters, landed a summer job at Nancy’s seafood restaurant on Martha’s Vineyard where she is working the takeout window, the cash register and busing tables, according to the Boston Herald.

The first daughter is using her full name, Natasha, and has been accompanied by Secret Service while she works at one of the Obamas’ favorite vacation restaurants. Restaurant owner, Joe Moujabber, is said to be a friend of the First Family and Sasha’s connection to the job, reports claim.

While the White House didn’t comment on Sasha’s employment, the Herald reports it’s part of the family’s attempt to “to raise their daughters as normally as possible.”

1. Nancy’s Restaurant Is Believed to Be An Obama Family Favorite During Their Vacations

Sasha Obama is working hard for her money at a summer job https://t.co/lVOsbswABM pic.twitter.com/WnAyKXeJC1 #money #lifehacks

When the First Family vacations on Martha’s Vineyard, they have a history of visiting Nancy’s restaurant, where Sasha landed her summer job. Usually, though, a media circus and Secret Service agents make it difficult for the family to enjoy a meal away from others:

Nancy’s is in Oak Bluffs, Mass., on the island of Martha’s Vineyard. It’s a seafood joint — and has plenty of fried food options. The Obama family has visited since 2009.

So Sasha Obama has a 'summer job' mind you its for a few days working three hours with secrets agents there. Okay? pic.twitter.com/zyBxXndJJO

The Herald reports Sasha has been “working a cash register, busing tables and prepping the restaurant before it opens for lunch.”

The 15-year-old is getting paid somewhere between $12-$15 per hour plus tips, according to TMZ. 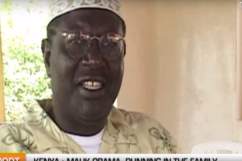 3. Nancy’s Has An Awesome View

Only a few more nights like this left. We close this Saturday for the season.

One of the things attracting most Vineyard-goers is the ability to vacation in a coastal town with high-end food and top-notch resorts. But Nancy’s boasts some incredible sunsets:

Even when winter comes, it’s the thought of summer that keeps the restaurant afloat:

Who's ready for summer? #limeplease 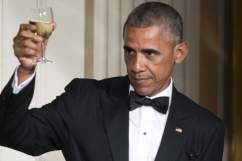 The Best Barack Obama Quotes on the President’s 55th Birthday

4. The Obamas Will Vacation This Week & Expect Them To Frequent Nancy’s

Welcome to Nancy's, can I take your order?! Remember your first summer job? #SashaObama is… https://t.co/CWCjkbGig0 pic.twitter.com/67Gze1yqq5

Just as in years past, the First Family is taking their summer vacation to Martha’s Vineyard. Sasha is expected to continue her four-hour shifts until Saturday, when her parents arrive for their annual two-week vacation.

“She’s been around for a few days,” one of the girls working the takeout window told the Herald. “It’s pretty random.” 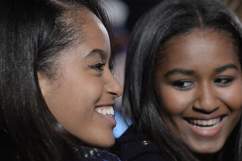 5. Obamas Trying to Raise Girls ‘As Normal As Possible’

Yes, they’re the president’s daughters and yes, they are surrounded by Secret Service pretty much all the time. But Sasha’s summer job is an attempt, the Herald speculates, to fulfill what First Lady Michelle Obama told Entertainment Tonight about trying to “normalize their lives as much as possible.”

Loading more stories
wpDiscuz
12
0
Would love your thoughts, please comment.x
()
x
| Reply
Sasha Obama is working at Nancy's Restaurant on Martha's Vineyard for her new summer job. Obamas vacation there and Nancy's is a favorite stop.