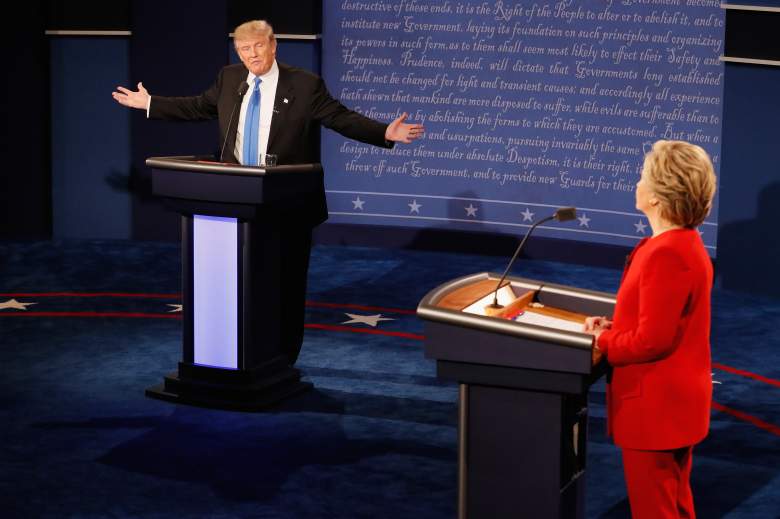 Hillary Clinton and Donald Trump at the first debate at Hofstra University. (Getty)

At Monday’s Presidential debate at Hofstra University, Hillary Clinton jabbed at Donald Trump‘s history on race, noting that the Republican nominee was sued in 1973 by the Justice Department for housing discrimination, with Trump pointing out that his settlement on that case did not require him to admit guilt.

The case was one of the most complex the Justice Department had ever brought at that time, involving more than 14,000 apartments across New York. In 1972, the Department sent two undercover apartment seekers, one black and one white, to a Trump property in Brooklyn; according to the “testers,” the black woman was told there were no vacancies, while the white woman was given the choice between two available apartments.

Trump held a press conference in Manhattan, denouncing the government’s “outrageous lies” and claiming that their efforts were really part of a scheme to force apartments open on behalf of welfare recipients, with potentially disastrous implications for the housing and rental markets. He retained Roy Cohn, a controversial attorney known for working with disgraced anti-communist Senator Joe McCarthy, for his defense. Cohn countersued the Justice Department for $100 million and obtained a recantation from the building superintendent and a claim from another witness that the government had threatened him with losing his job if he did not testify.

After two years, the Trumps finally settled with the Justice Department, in a consent decree forcing the Trumps to send reports of all vacancies to the Urban League and to run government-bought advertisements touting their apartments as open on an equal-opportunity basis. Trump described the agreement as “a minor settlement without admitting any guilt,” while the government claimed the decree was “one of the most far-reaching ever negotiated.” The case was briefly reopened three years later, though court records do not show the eventual result.

Loading more stories
wpDiscuz
2
0
Would love your thoughts, please comment.x
()
x
| Reply
The Department of Justice required him to stop discrimination but not to admit guilt.