Voters wait in a queue to cast their ballots in the presidential election at a polling station in Christmas, Florida on November 8, 2016. (Getty)

As voters head to the polls to cast their ballots for president and several other important races, chaos is bound to occur at some polling places around the country.

Whether it be fights, arrests or attempts at voter intimidation, Election Day seems to bring out the worst in some people.

Here are some of the incidents so far:

Topless Trump Protesters Arrested at His Polling Place in Manhattan

Two topless women were removed Tuesday morning from Donald Trump’s polling place in Manhattan before he was set to cast his ballot there.

One of the women had “Trump, grab your balls,” written across her bare chest and stomach. The other woman had “Hate out of my polls” written on her body.

They were identified by the New York Daily News as Tiffany Robson, 28, of Seattle, and Neda Topaloski, 30, of Montreal. They were given a summons for electioneering, the Daily News reports.

They were with FEMEN, an international feminist organization that stages topless protests.

“We use our bodies to express our ideas,” Topaloski told the Daily News. “If you have an authoritarian, nationalist and sexist presidential candidate, women will come to answer back.”

Woman says she was attacked while handing out Trump brochures. Used pepper spray on man who jumped on her, punched her @CBS12 pic.twitter.com/ZnaDZralqH

A Donald Trump supporter in Florida says she used pepper spray on a Hillary Clinton voter after he assaulted her during an argument at a Jupiter polling place, the Palm Beach Post reports.

The altercation involved Donna Tatlici, who was volunteering her time to hand out Trump brochures at the polling place, and Tom Garrecht, who said he was there to vote for Clinton.

According to the Post, Garrecht, 52, told her, “I don’t need anyone to tell me who to vote for,” when Tatlici approached him as he entered the polling location. Tatlici told the newspaper she responded, “I’m not here to do that. I’m just here to give you the information.”

I'm at the Jupiter Community Center, where police say a man and a woman got into a fight and the woman pepper-sprayed him. pic.twitter.com/jpdHU11iS5

Tatlici told he Post that Garrecht “came right into my face” and began yelling at her after he voted. She said she warned him she had pepper spray, but he came closer and she sprayed him.

“He then threw me down and started punching me,” said Tatlici told WPBF-TV.

No arrests were made at the scene, but charges could still be filed.

“They said they’re probably going to charge me with assault, which is absurd, since she sprayed me first,” Garrecht told the Post.

Tatlici told reporters she plans to press charges against Garrecht.

An armed man was detained by police, but released without charges, while standing next to a sign reading “F*ggots Vote Dem” at a Texas polling place, the Houston Chronicle reports.

The man was standing just outside of the 100-foot limit at the Spring, Texas, polling place. His name has not been released.

PBSO confirms two men get into fight at Royal Palm Presbyterian on Jog Road in Lake Worth during voting. One pulls out gun. @wptv

Two men were arrested after a fight at a church during voting in Lake Worth, Florida, the Palm Beach County Sheriff’s Office told WPTV.

One of the men pulled a gun during the fight, the news station reports.

They are both facing misdemeanor charges. The sheriff’s office said the situation was quickly defused by deputies.

New info: 2 clerks dismissed AND 2 poll watchers. @nbc6 was there when deputies removed them from property pic.twitter.com/kWMQnJBPUP

Two election workers, one a Democrat and the other a Republican, were fired after a fight over elderly voters at a polling place in Broward County, the Miami Herald reports.

Deputies were called to remove the workers from the Pompano Beach polling place, NBC Miami reports.

“They wouldn’t adhere to our policies and procedures so they had to be let go,” Tonya Edwards, a spokesperson for the county supervisor of elections, told the Herald.

A witness told the Herald that the fight began after Republican poll watchers complained that Democratic poll watchers were allowing elderly voters to go into the polls with health aides. The Republicans were concerned that the aides were instructing the voters on how to cast their ballots for.

BOE Director says a voter threatened to bring a gun to a polling location after being told they couldn't vote at precinct. @cleveland19news

A security threat was reported at a polling place in Cleveland after a man threatened to come back with a gun after being told he couldn’t vote at that precinct, a Board of Elections spokesperson told WOIO-TV.

No other details about the incident were reported.

About 100+ on the sidewalk as the #DunkinDonutsCenter is evacuated due to unattended backpack. #WPRO pic.twitter.com/NPsI71xMLu

The Dunkin Donuts Center, an arena in Providence, Rhode Island, being used as a polling place, as evacuated after a suspicious bag was found, the Providence Journal reports.

The evacuation lasted about an hour.

“Someone left an abandoned backpack,” Mayor Jorge Elorza told the newspaper, “and out of an exercise of caution we had the bomb sniffing dog go in and the state police bomb squad is currently X-Raying it.”

In another incident across the country, a polling place in Santa Clara was evacuated after a fire alarm went off.

Everyone is being let back into the Santa Clara County Registrar of Voters building. Spokesperson told me it was burnt toast in break room. pic.twitter.com/jXNESeUDvV

Officials told ABC 7 that the cause was burnt toast.

A volunteer with the Clinton campaign claimed that Trump supporters were trying to intimidate voters by blocking the path to a polling place in Coral Springs, Florida, according to Ari Berman.

Berman later tweeted, “Police came to polling place & got control of situation. Trump supporters now off to the side.” 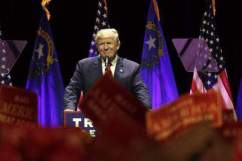 Loading more stories
wpDiscuz
0
0
Would love your thoughts, please comment.x
()
x
| Reply
Fights, arrests and other incidents have been reported at polling places around the country. Read about the Election Day chaos here.