As of the time of publication, there were no confirmed arrests and very little information on the Azusa shooting. A middle school and a preschool are both locked down, four people were shot and one person is dead. The shooting took place near two polling places in LA county, and voters are wondering if the shooting was politically-charged.

The shooter fired at least 20 rounds at police before retreating into a house after police returned his fire. The officers had to be rescued by more police arriving in an armored vehicle, and the suspect is currently surrounded in the home where he retreated. Officers are treating it as a barricade situation. There’s a heavy police presence in the area, with officers from Azusa PD, West Covina PD and the LAPD joining forces.

This first video is a citizen video from Francesca Moore in Azusa. At the beginning of the video, gunshots can be heard, and later Frencesca goes outside where other citizens are recording.

The below video is a news reel from CBS Los Angeles, which covers the event and talks to local citizens — including parents of the children stuck in locked down schools.

1 Dead, 3 Injured In Officer-Involved Shooting In AzusaOne person was killed and three were treated for injuries at an area hospital following an officer-involved shooting Tuesday in Azusa, authorities said. Kristine Lazar reports.2016-11-09T00:22:04.000Z

In this secondary video from Sky9 News, different angles and talking points are covered: 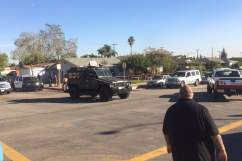