Two people have been arrested in the murder of Heather Ciccone 15 months after she was shot in the back of the head while she sat in her car in the driveway of a stranger’s house, police say.

She had complained about a female stalker in the weeks before her death and said she had received death threats, but that woman has not been arrested. It is not known if that was connected to Ciccone’s death.

Vejarano and Williams, who both have lengthy criminal records, are facing first-degree murder charges, the Fredericksburg Free-Lance Star reports.

Spotsylvania County Sheriff Roger Harris said in a press release they would not be discussing the details of the case. A motive for the killing has not yet been made public.

Police have not said if they knew Ciccone or how they knew her if they did.

Both men have been in jail for several months on unrelated charges.

Here’s what you need to know about Ciccone, the suspects and the case:

1. Ciccone Told Her Mother She Was Going to Help a Friend Whose Car Had Broken Down & Had Recently Talked About Being Stalked by a Woman

Mysterious murder: Heather Ciccone was killed in this driveway. But no ties to the home. Details 6p @fox5dc pic.twitter.com/c9oGicYReh

Heather Ciccone’s mother, Stacy, told NBC Washington her daughter said she was going out to help a friend whose car had broken down. She left their home at about 9:30 p.m., and never returned. She was found dead at about 11 p.m., police said.

“Why would you take my little girl away from me?,” Stacy Ciccone asked during an interview with the news station.

Her father, Dennis, told the news station, “It’s hard to put in perspective until it really happens to you.”

There is no apparent connection between Ciccone and the driveway where she was found dead.

Police posted photos of Ciccone’s car and asked that anyone who saw it before the shooting to contact them. The photos show that “I ♡ U” was written on the back window of the car, with a winking smiley face below it:

Ciccone died of a single gunshot wound to the back of the head, according to court documents obtained by the Fredericksburg Free-Lance Star. The newspaper reports that police found “lots of blood” in the 2010 Kia where Ciccone was shot.

Ciccone had complained to her family and on Facebook about a female stalker in the weeks before her death, but it is not known if that is connected to the case.

On December 4, in her last public post, she wrote, “I hate when a female gets her friend to request me to lurk on my s**t. Like I see the girl who don’t like me in your pictures with you. Tell her to man up and send her own request.”

She wrote on December 3, “I swear I give up … I’m DONE playing nice.” Earlier that day she wrote, “I finally see the BIG picture. It hurts but from here on out, it’ll only get easier for ME.”

On December 2, Ciccone wrote, “I swear this bitch has NO f*****g life.” On that post, her sister commented, “What did she do now? You need to take your tail down to the magistrates and file harassment and stalking charges!”

Police have not yet said how they connected the two suspects, Joshua Williams and Jonathan Vejarano, to the case.

Williams and Vejarano were arrested after they were indicted on murder charges by a grand jury, the Spotsylvania County Sheriff’s Office said in a press release.

“For the past fifteen months detectives have worked hard with the assistance of the several local jurisdictions to bring the case before a grand jury,” the sheriff’s office said. “Since this is an ongoing investigation, we will not be discussing evidence presented to the grand jury.”

Vejarano and Williams are in custody at local jails, the sheriff’s office said. It is not known when they are due to appear in court on the murder charges.

2. Williams Was Accused of Abducting His Son in May 2016, Leading to an Amber Alert & Felony Domestic Violence Charges

Joshua Williams was accused of abducting his 3-year-old son in May 2016, leading to an Amber Alert and felony charges when he was caught, WVIR-TV reported at the time. Williams threatened to harm the boy, but the child was found safe, the news station reports.

Police said Williams assaulted his son’s mother, and took the boy, putting him in his car with only a diaper on and driving away, WRC-TV reported. The boy was later returned to his grandmother’s house by a stranger, police said.

“He’s made threats against the child — to either harm or kill — in the past,” Captain Jeffery Pearce of the Spotsylvania County Sheriff’s Office told WRC at the time.

The boy’s mother was hospitalized as a result of the assault, police said.

He has been in custody at the Central Virginia Regional Jail since his arrest in the Amber Alert case. Williams was charged with assault and battery on a family member, third offense, in that case, a felony charge that is still pending, court records show. A trial in that case is scheduled to begin on March 24 in Spotsylvania County Circuit Court.

Williams criminal record dates back to 2005, according to Spotsylvania County court records. He was arrested that year on charges of malicious wounding, assault and battery and disorderly conduct.

He pleaded guilty in 2006 to malicious wounding and was sentenced to five years in prison, with two years suspended. The other charges in that case were dropped.

He also has convictions for possession of a controlled substance with intent to distribute, probation violations and failure to comply with a judicial order, according to court records.

Jonathan Vejarano has a criminal record dating back to 2009, according to Virginia court records. He was arrested in August 2009 on felony charges of receiving stolen property worth more than $200.

Vejarano pleaded guilty in Spotsylvania County Circuit Court to the felony charge and was sentenced to five years in prison, with all but six months suspended.

Since that arrest, Vejarano was convicted four times of violating his probation, court records show. He was sentenced to 90 days in jail in 2012 for one of those violations and nine months in jail for another in 2014.

He was arrested in September 2016 on a fifth probation violation and has been in custody since that arrest. He has a hearing scheduled in that case on March 28.

He also has convictions for driving with a suspended license and possession of marijuana.

Vejarano is being held at the Rappahannock Regional Jail. 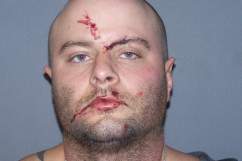 4. Ciccone Was a High School Basketball Player, a Server at Red Robin & a ‘Great Aunt’

Ciccone played high school basketball at Chancellor High School in Fredericksburg until 11th grade, when she stopped playing because of her job. The school posted a message on Twitter about Ciccone’s death:

Rod Crooks, the athletic director at the high school, told the Free-Lance Star, “It’s just pretty much caught everybody off guard, especially here in Spotsylvania County.”

J.P. Gibbons, one of her coaches, told the newspaper Ciccone had an “infectious smile,” and was a solid basketball player, scoring 21 points during one game her sophomore year. He said she was always pointed in a positive direction.

“She was driven both on and off the basketball court,” Gibbons told the newspaper. “I expected her to do some great things.”

Ciccone worked as a server at Red Robin in Fredericksburg.

Her sister, Courtney, told WTVR-TV that Heather was a great aunt to her niece and nephews.

“She had such a good, bubbly personality and smile,” Courtney told the news station. “She was the sweetest most caring person you’d meet.”

Courtney Ciccone posted on Facebook in the days after Ciccone was killed, pleading for help in finding her sister’s killer.

“Please help us find who did this selfish, unthinkable act of hate! She was the sweetest most caring person you’d meet. Someone murdered her in cold blood and left her to die alone! Words can’t even describe what they are putting our family through and what her family is going to miss out on,” she wrote.

5. Ciccone’s Mother Says the Suspects ‘Will Have to Suffer the Wrath They Chose’

Ciccone’s case has been unsolved since she was found in her car two years ago, but her family said they kept hope and police did not let the mystery go cold.

“Her execution style murder was a shock for this community. Heather was a loved daughter, sister, friend and (co-worker) of Spotsylvania. The last 15 months have been sheer HELL! This is something (you’re) never taught or learn about in life is loss, loss due to a heinous crime,” her mother, Stacy, said on the Justice for Heather Facebook page started after her death. “The (outpouring) of this community coming together gave us faith and now today the suspects identities will be released. They, along with their families will have to suffer the wrath they chose.

“I can’t thank everyone enough for being (there) for myself, my kids, my parents, my sister & her kids in this tragic time of our lives. Heather you are and will always be missed baby girl,” Stacy Ciccone wrote.

Sheriff Roger Harris said in the press release he “would like to personally recognize the dedication and persistence of the investigative team that brought us to today.”