A Tulsa man accused of strangling a 19-year-old woman during a burglary was previously suspected in two murders, but was never prosecuted in either case because of a lack of evidenceKOTV reports.

Gregory Epperson, 41, was charged with murder in the death of Kelsey Tennant, who came home from work Monday afternoon to find him burglarizing her home, according to police. Epperson beat and then choked Tennant to death, police said.

He is also accused of attacking Tennant’s boyfriend and trying to shoot him when he also came home, police said.

In 2015, Epperson was charged in the 2008 cold case murder of Tulsa car dealer Ray Johnson, KOTV reports. The charges were dropped last year because the district attorney determined there wasn’t enough evidence to convict him.

Epperson is also suspected in the unsolved killing of his landlord, John Baker, but has never been charged in that case, police said.

1. Police Say Epperson, Who Didn’t Know the Victim, Continued Rummaging Through the House While Tennant Was Dying & Was Later Caught in a Neighboring Apartment

Police say Greg Epperson broke into Kelsey Tennant’s apartment in south Tulsa while she was at work on Monday, KOKI-TV reports.

When she came home from work about 3 p.m., she walked in on Epperson inside the apartment, and he attacked her, beating her and then strangling her, police said. As Tennant was dying, Epperson continued to rummage around the apartment, KFOR-TV reports.

Her boyfriend, Riley Allen, became concerned when Tennant didn’t answer his calls, and came to her apartment to check on her. Epperson also attacked Allen and tried to shoot him, according to police. Allen was wounded and Epperson fled, police said.

Police and medical personnel responded to the apartment and took both Allen and Tennant to the hospital. Tennant was in critical condition with no brain activity when she was rushed to the hospital, and she was later pronounced dead about 11:50 p.m. Allen was not seriously injured.

According to police, Epperson was found in a neighboring apartment and was arrested about 11 p.m.

Investigators say there are no ties between Epperson and the victims. He is a friend of their neighbor, KOKI reports.

Kelsey Tennant & her boyfriend Riley were both attacked Monday at their apartment. Tennant, however, died from her injuries. @KJRH2HD pic.twitter.com/itrXbN8HxL

Tulsa Police Sergeant Dave Walker told the Tulsa World the case is believed to be an “an interrupted burglary.”

It is one of three homicides that occurred in Tulsa on Monday in an eight-hour period and is the 16th in the city this year.

2. Epperson Told a Witness He Killed Ray Johnson, His Cousin’s Husband, in 2008 After They ‘Got Into It’

Epperson was arrested in 2015 and charged with the 2008 murder of Tulsa car dealer Ray Johnson, according to KOTV.

“Epperson, we believe, shot and killed Mr. Johnson, put him in the trunk of a car then dumped his body in a creek,” said Tulsa Police Homicide Sergeant Dave Walker told the news station on Tuesday.

But the case was dropped by prosecutors last year because of a lack of evidence. Epperson was released from custody in January 2016, just before a trial in the case was set to begin.

“We didn’t feel like there was sufficient evidence to prove beyond a reasonable doubt, with the evidence we had,” Assistant District Attorney John David Luton told the Tulsa World in 2016. “And if we did take it in front of a jury and they found him not guilty, we’d be forever barred against prosecuting him.”

Johnson disappeared on September 11, 2008, and his body has never been found, the Tulsa World reports.

Epperson was arrested after a witness came forward and claimed he had been forced by Epperson to help dispose of Johnson’s body after he was killed.

Johnson, 34, was the husband of Epperson’s cousin, according to the Tulsa World. Epperson told police Johnson was also a friend of his from school, but denied killing him. He refused to give a DNA sample whne questioned.

Johnson’s wife reported him missing on September 12, 2008, after he failed to come home. She went to his car dealership and found his car, and told police it smelled like bleach and items in the trunk had blood on them, the World reports.

A witness, Jarid Taylor, later told police Epperson put a gun to his head and forced him to help dispose of Johnson’s body. Taylor said he had gone to Epperson’s house, and Epperson told him he needed help after he “got into it with his boy.”

According to court documents obtained by KOKI-TV, Taylor told police he saw Epperson holding a bleach bucket and spraying down his driveway with a garden house. He then saw blood on the ground and a body on the side of Epperson’s house, with a bloody hammer laying next to it.

Taylor told investigators he and Epperson put Johnson’s body into the trunk of a car and dumped him in a creek.

According to police, a familial DNA sample taken from Johnson’s son matched blood found in the vehicle Taylor told investigators they used to dispose of Johnson’s body. The sample also matched blood on items found on items in the car, police said.

Luton, the assistant district attorney, told the Tulsa World in 2016 that they decided to halt the prosecution because they were waiting for additional DNA testing and hoped to speak to additional witnesses.

“The prosecution of Gregory Jerome Epperson for the death of Ray Johnson was discontinued due to significant concerns about the lack of corroborating evidence to convict him,” District Attorney Steve Kunzweiler said in a statement on Tuesday, after Epperson’s arrest in the latest homicide case.

Kunzweiler said the statements by Taylor, a felon and associate of Johnson and Epperson, couldn’t be sufficiently corroborated by independent evidence.

3. He Was the Last Person to Talk to John Baker, His Landlord, Before Baker Was Killed in 2010 & Dumped in a Lake, Police Say

Epperson is also a suspect in another unsolved homicide, the 2010 death of John Baker, KOTV reports.

Baker’s body was found in Lake Keystone. Epperson has never been charged in the case.

“The last person to talk to Mr. Baker was Epperson and Epperson was living in a rental house of Baker’s,” Tulsa Police Sergeant Dave Walker told KOTV. But there was no physical evidence to connect Epperson to the case, Walker said.

Baker, 66, disappeared in November 2010, KOTV reported at the time.

His truck was later found abandoned, and his body was located in January 2011 at the Keystone Dam.

Police said Baker was an avid poker player and was known to carry large amounts of cash. His daughter, Carmen Matherly, said in 2014 the family was still hoping to find his killer.

“The holidays are terrible, but every day is. I wake up and his picture is right there. There’s not a day, in the back of my mind, I don’t try to play detective myself and try to find this person that’s out there,” she told KOTV. “”I know there’s people out there that know the real truth to this case, and I beg and plead everyday and pray that they would have the heart to come forward.” 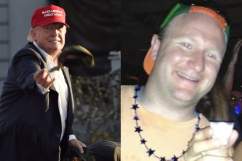 4. Epperson Is Being Held Without Bail on Charges Including First-Degree Murder & Burglary

He is scheduled to appear in court on March 28. It is not clear if he has an attorney.

While Epperson has never been convicted of murder, he has a lengthy criminal record. His previous convictions include second-degree burglary, obstructing an officer, driving under suspension and transporting an open container.

He was most recently arrested in December 2016 for failing to pay court costs.

Epperson is a Tulsa resident and has two daughters, according to his Facebook page.

Kelsey Tennant had a sassy, stubborn side and the most contagious smile and laugh, her sister, Courtney Jefferson, told KJRH-TV.

“Everybody who met her never had a negative thing to say about her,” Jefferson told the news station. “She loved so many people, and was loved by so many people.”

Tennant was a recent graduate of Broken Arrow High School. She worked at Metro Appliances & More, according to her Facebook page.

She and her boyfriend, Riley Allen, had recently celebrated their second anniversary, her family said. They grew up together in Broken Arrow, about 20 minutes outside of Tulsa, and both performed with the Broken Arrow Pride band. Tennant was in the color guard.

Allen wrote on Facebook, “She will always be missed my sweet sweet princess I love you Kelsey Sue.”

Tennant’s sister told the news station, “Their relationship gave me hope that there are still some very special people out there. I know that he loved her very much and did anything for her.”

Jefferson told the news station her sister was adventurous and selfless, loved riding four-wheelers and go-karts, and often took care of her 2-year-old nephew, Jefferson’s son. She also went on many mission trips with her church.

“She was a special person,” Jefferson said. “Anybody that had the opportunity to meet her was very blessed.”

We are devastated to have to put this into words but my sister, Kelsey Tennant, went to Jesus last night. She went home from work yesterday for lunch and was robbed, strangled and left for dead. She was unconscious and not breathing. Her bf Riley Allen came as quick as he could because he knew something was wrong and was attacked as well. He is ok and my sister was admitted to the hospital yesterday. She fought hard like the stubborn self she is but she became an angel last night at 11:50pm. I sit here as I type this and wonder how you are supposed to post something like this. My mom and Dad and I are so thankful for everyone who has already reached out to us and thankful for all the prayers that went up last night. We know that she had people from across the nation praying for her and so many people that love and cherish her. Each time we received a text or knew people were praying, we made sure that she knew she was loved and people were fighting along with her spiritually. We are glad her sweet spirit is now with Jesus and the rest of our family that has passed before and most importantly that she is no longer suffering. Please continue to keep our family in your prayers as this next season/year/years will be extremely difficult for us. Life is so precious and sweet. Please take a moment, say a prayer for us, hug your loved ones close, and tell them you love them.

Tennant’s family is still planning her funeral. They said they are relying on the outpouring of support they have received from the community.

“It’s great because she’s an amazing human being and never deserved this,” Jefferson said through tears during her interview with KJRH-TV. “We are glad that she is now with Jesus and with all the other angels that have gone on before her.”