Monterey County DA Dean Flippo announced Thursday that murder charges will be filed against a suspect in the 1998 murder of Christina Williams.

Charles Holifield, who was long thought to have committed the murder by federal investigators, will officially receive charges against him no later than April 14 in the almost 19-year cold case, Flippo said.

Holifield is already in jail for two life sentences related to kidnapping a woman at gunpoint. Before that, he was convicted of sexually assaulting two teenage girls.

For years, the case seemed as if it would go unsolved with not many leads to go on. But a break in the case about eight years ago identified Holifield as the main suspect, though investigators struggled to obtain evidence or a confession to file charges.

Shortly after suffering the heartbreaking loss of their child with no killer ever being found, the Williams family set up the Christina Williams Foundation for Families. The organization helps families with missing children use the latest technology to search for a missing person.

The foundation has been known to raise money for the families of missing people in the area and assist law enforcement.

1. Williams Disappeared While Walking Her Dog In 1998

Monterey County DA Dean Flippo says murder charges will be filed by next Fri. against Charles Holifield in the death of Christina Williams. pic.twitter.com/KGD0W8ua2t

Christina Williams was born in Japan to a Filipino mom and an American dad, who served as a chief petty officer of the U.S. Navy. The family lived in Japan at a time and moved to the U.S. soon enough and called it home.

Williams, 13 at the time, was reported missing after she left to walk the family dog near their home in Fort Ord in June 1998. She left her house at around 7:30 p.m., and the dog came back home an hour later with just its leash.

Her remains were found seven months later on the Fort Ord Army base, miles from the Williams’ family home, near an oak tree covered by thick brush.

Williams’ body was found in an area that had been searched before, and sketches of potential suspects ranged from young man to an older man, establishing no leads for investigators.

In addition, the case was featured on America’s Most Wanted and CNN.

Up to $100,000 was offered by the FBI to those that came forward with information leading to the suspect.

A scholarship was established at the University of California-Berkely, and a memorial was made in Christina’s honor in Marina.

2. Holifield Was Put ‘On Notice’ By the FBI In 2010 for his Role In the Williams’ Murder

Not many leads in the case had been made until the FBI raided Holifield’s home in 2009 on suspicion he may have been involved.

Police were searching for evidence that could implicate Holifield in the case. In the process of doing so, they found a marijuana grow operation being performed by his brother, Robert Holifield Jr.

Agents found 40 plants and 20 seedlings being grown in the garage.

Charles Holifield was identified as the chief suspect in the case and the FBI findings at the home weren’t disclosed. Agents were reportedly seeking letters that were believed to be authored by Charles in jail and sent to his brother.

In September 2009, FBI agent John O’Brien visited prison and interviewed Holifield. He wrote the suspect a letter in December 2009 that said he had information that “appeared to connect a few dots in your mind,” referencing Williams’ murder.

O’Brien wrote in the letter:

I gave you only a bare synopsis of some of the facts that we will use to indict you for the abduction and murder of Christina Marie Williams on June 12, 1998. Even with the limited information I provided, you know you are in a no-win situation when we go to a jury trial.

The Herald reported that the letter O’Brien sent told him to confess to the crime to aid his family in the process they were about to be put through.

BREAKING: Charles Holifield to be charged with the 1998 kidnapping and murder of Christina Williams.
STORY: https://t.co/lkCm6yOejl pic.twitter.com/vZnAimAYZa

Holifield has a history of violent behavior and sexual assault against young women.

Between 1979 and 1983, Holifield raped two teenage girls and was suspected of a third in Fort Ord. He confessed to raping one of the victims in 1983, but never admitted to the rest.

Years later and four months prior to Williams’ body being located, Holifield was convicted of kidnapping a 23-year-old woman who was jogging. He ordered her into his truck at gunpoint and in Marina.

Holifield was sentenced to two life sentences for the murder of the woman.

4. Holifield’s Father Testified In a Grand Jury Hearing About an Email He Sent to Williams’ Father

Christina’s father, Sgt. Michael Williams, received an email from Holifield’s father, Robert Sr. in the summer of 2009 in regard to the case.

In the email, he “expressed sympathy for the Williams family’s loss and the intense shame he felt at being the father of Christina’s suspected killer,” The Monterey Herald reported.

He testified before a federal grand jury — as did his wife — and was questioned by federal prosecutor Jeff Nedrow.

The Herald interviewed Robert shortly after the hearing and he said Nedrow “hammered” him about the email.

The military veteran said that the FBI believed the email he sent gave them “new information” that leads to the conclusion of Charles being guilty in Christina’s murder.

Robert said that he typed the email because of the large amount of sympathy and compassion he felt. He said that if he ever came upon anything to implicate Charles in her murder, he “wouldn’t have hesitated to turn him over.” 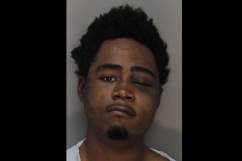 5. In 2011, Holifield’s Former Girlfriend Recanted Her Statement on His Alibi

Suspect to be charged in 1998 slaying of Christina Williams https://t.co/qECzjErVos pic.twitter.com/QM44jwajJd

Another break in the case was made when the woman who confirmed the alibi of Holifield for years said she lied.

The Herald reported in 2011 that Lisa Johnson, Holifield’s former girlfriend, told an FBI agent that she made up a statement that said she was with him the evening of Christina’s murder.

Johnson claimed she only did so because Holifield threatened to kill her “if she did anything to send him to prison.” She had also claimed to marry Holifield in Monterey County Jail, but that also proved to be a lie.