Getty Megyn Kelly with her husband, Douglas Brunt, in 2016.

Megyn Kelly , the host of “Megyn Kelly Today” on NBC, is married to novelist and former CEO Douglas Brunt. They have been together since 2008 and have three young children.

Kelly’s future at NBC is in doubt, according to multiple media reports. The former Fox News anchor and reporter has been at NBC since June 2017, first hosting a Sunday night news magazine program before shifting to a daily morning show. CNN reports that the 9 a.m. “Megyn Kelly Today” show is coming to an end, but it is still up in the air whether she will remain at the network in a lesser role. Meanwhile, The Daily Mail is reporting that Kelly is done at NBC, but she will be paid the entirety of her $69 million contract unless the network can prove she violated a clause in some way.

Kelly also parted ways with her talent agency, CAA, and has hired an attorney to represent her. The turmoil comes after Kelly sparked outrage by questioning why blackface Halloween costumes are offensive. Her comments came during a panel discussion on offensive Halloween costumes on her show that featured an all-white panel. She later apologized. An unnamed NBC executive told The Daily Mail, “Megyn Kelly is done. She is not ever coming back… We are just working out timing of the announcement but mark my word – she is gone and will never be seen on NBC live again.”

Here’s what you need to know about Megyn Kelly’s husband Douglas Brunt:

1. The Couple Had Their First Kiss in Front of Security Guards Because Kelly Had a Stalker

Douglas Brunt and Megyn Kelly attend the “Manus x Machina: Fashion In An Age Of Technology” Costume Institute Gala at Metropolitan Museum of Art on May 2, 2016 in New York City. (Larry Busacca/Getty)

Douglas Brunt and Megyn Kelly were featured on the popular social media page “Humans of New York” when they were at the Metropolitan Museum of Art Gala in Manhattan on May 2.

Brunt talked about his first kiss with Kelly:

We started dating shortly after she acquired a stalker—bad start, I know. So she had security with her 24/7. Our first date went great. It was the kind of night that was clearly going to end with a kiss. But I had to kiss her in front of the security guards. It was awkward. It was like our parents were watching. The next morning she knocked on my hotel room door. She was alone. She walked into the room, and said: ‘I can do better.’

Brunt and Kelly married on March 1, 2008, at a wedding ceremony in Huntington, New York, according to the New York Times.

“He came across as sincere,” Kelly told the Times about her first impression of her future husband. “While we were talking, he leaned forward, really listening to what I was saying. He’s also clever and has a great sense of humor.”

Brunt told the Times, “She’s clear about what she wants out of life. There was such an energy about her that she lit up the room.”

He proposed to Kelly in September 2007 at a beach in New Jersey.

2. They Have 2 Sons & a Daughter Together

Brunt and Kelly have three young children together, two sons and a daughter.

Edward Yates Brunt, their oldest child, was born September 25, 2009, according to People. He is named after his two grandfathers, and goes by his middle name, Yates.

Thatcher Bray Brunt, their third child, was born July 23, 2013, according to US Magazine.

Brunt, Kelly and their children live in New York City. 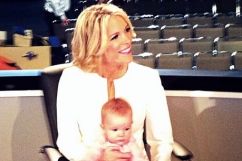 3. Brunt Was the CEO of an Internet Security Firm Before Becoming a Bestselling Author

Brunt was the CEO of Authentium, Inc., an Internet security company, from 2001 until 2011, when he sold the company, according to his website.

He previously worked as a consultant for Booz Allen & Hamilton and as a director with idealab!, a technology incubator.

Brunt is from the Philadelphia area and attended The Haverford School. He then graduated from Duke University.

.@DougBrunt and I in Paris for a few days – gorgeous fall day. pic.twitter.com/DGyrCYPw1W

After selling Authentium, Brunt turned to writing novels. He has published three books, Ghosts of Manhattan, which became a New York Times bestseller, and The Means.

“I’ve always loved literature. I was very shy as a kid and for shy people, literature is a great thing. It’s a safe place to go. I’m a bit less shy now, but still love to lose myself in both reading and writing,” he says on his website. “The writing has generally been something I did as a hobby. During a fairly stressful career as a CEO, sometimes in order to relax—usually on an airplane or on the weekend—I would choose to write rather than read. That’s how this novel began.”

His most recent novel, “The Trophy Son,” was published in May 2017. His website states about the book, “Written with an insider knowledge of the tennis circuit, Trophy Son explores a young man striving to find balance in his life, navigating moral compromises, performance-enhancing drugs, and the elusive lure of wealth and celebrity. From Wimbledon and the U.S. Open to the off-court life of elite players, Anton finds exhilarating highs and desolate lows as he searches for an identity apart from his achievements.”

4. He Says Donald Trump’s Attacks on His Wife Never Knocked Her Off Balance

Doug Brunt recently spoke out about the attacks on his wife by presumptive Republican presidential nominee Donald Trump.

He told the Fox News Channel show Outnumbered that the attacks were “frustrating” to watch. He said Trump was able to knock his opponents off balance, but not Kelly.

“These are seasoned politicians with teams of advisers and he broke them down,” Brunt said. “But not Meg. She stayed on the high road, never engaged and kept her eye on the ball the whole way.”

You never know who's going to stop by the @OutnumberedFNC couch! Today it was @megynkelly and her husband @DougBrunt pic.twitter.com/PJ5HkUzLPx

Brunt said his wife handled the situation like Michael Jordan in his prime.

“The ball comes to him and you just know he’s got it. And that’s the way it is watching her go out there. She’s the most prepared person in the business,” he said.

5. Kelly Was Previously Married to a Doctor, Daniel Kendall

Doug Brunt is Kelly’s second husband. She was previously married to Doctor Daniel Kendall from 2001 to 2006. Kendall is an anesthesiologist and pain management physician.

They dated for four years before they married. Kelly and Kendall met in Chicago when he was a third-year medical student and she was an attorney.

He spoke about his marriage to Kelly, and their divorce, last year, in an interview with the Daily Mail:

It is fair to say that I wanted to start a family at some point and she wasn’t at that point, and yes, after we split that is what we told neighbors, but really there was more to it than that. She probably needed more emotional support than I could give her, and the same for me. It is just a matter that sometimes two personalities can clash. I wanted a wife and she wanted a wife — we both needed someone to cook and clean and support us. She has very much a Type A personality. I couldn’t imagine her staying at home. She needed more of a Type B husband. Sometimes with two professionals it doesn’t work out, we were both working extremely hard and both excelling at what we did. It is just a matter that sometimes two personalities can clash. So we broke up, it was mutual.

READ NEXT: Soldier & Mistress Drove Around With His Wife’s Body in Trunk: Cops