Daniel Noble is the man sitting behind Steve Castor, the lead counsel for the Republicans on the House Intelligence Committee, as well as Adam Schiff and Devin Nunes.

Noble is a senior counsel for the House Intelligence Committee. Like Daniel Goldman, the director of investigations for the committee, he worked in the U.S. Attorney’s Office in the Southern District of New York for several years. The seasoned lawyer is expected to play a role in the impeachment proceedings.

Noble is married to Ryan Fleenor, a reverend. He attended Yale Law School and specializes in cybercrime and organized crime prosecutions.

1. Noble Is a Former Prosecutor From the Southern District of New York

Noble attended Stanford University as an undergraduate, then attended Yale for law school. Following law school, he worked as a prosecutor for the Southern District of New York.

2. Noble & Goldman Have Worked Together in the Past 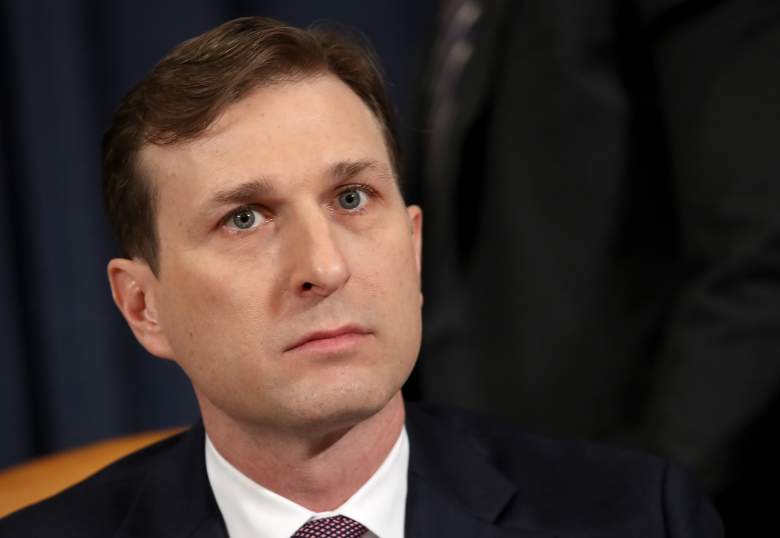 The impeachment inquiry does not mark the first time that Noble and Goldman have worked together. The two star prosecutors also worked together to convict Mikhail Zemlyansky of racketeering, insurance fraud, and securities fraud in 2015.

3. Noble Met His Husband, a Reverend, at Yale

House Intel’s Adam Schiff is adding another heavyweight prosecutor to the team that will investigate Trump’s business dealings: Daniel Noble, co-chief of complex frauds and cybercrime unit at US Attorney’s office in Manhattan.@gregfarrel @CBerthelsenBBGhttps://t.co/TK973fGgXE

Noble married his husband, Ryan Fleenor, in 2012. Per their New York Times wedding announcement, they were married before Judge Denise Cote of the United States District Court for the Southern District of New York. They planned to exchange vows in Central Park or the atrium of St. James’ Episcopal Church, the publication reports.

Fleenor and Noble met at Yale, when Noble was at law school and Fleenor was getting his master’s degree in divinity. Fleenor was an assisting priest at St. James Episcopal Church at the time.

4. Noble Was Previously Co-Chief of the Complex Frauds & Cybercrime Unit at the U.S. Attorney’s Office in Manhattan

Prior to being tapped by Schiff in March to investigate Trump’s business dealings alongside Goldman, Noble was working as the Co-Chief of the Complex Frauds and Cybercrime Unit at the U.S. Attorney’s Office in Manhattan.

5. Noble’s Parents Are a Children’s Advocate & a Technician

Per the New York Times wedding announcement for Noble and Fleenor, Noble’s parents are Cynthia and Nelson Noble. Cynthia works as an advocate in a program for families with children who have developmental and emotional problems. Nelson works as a technician for services at H&R Block.