London Phillips was an Arkansas man who “ambushed and executed” a Fayetteville police officer in his patrol car behind the city’s police station and was then shot dead during an exchange of gunfire with other officers, authorities say. The 35-year-old Phillips shot and killed Officer Stephen Carr, 27, on Saturday, December 7, 2019, as Carr waited for his partner, police said.

According to Reynolds, Fayetteville police officers had a brief history with Phillips, including a December 2018 incident when they received a report about Phillips impersonating a police officer. Further details about that case were not immediately available. Phillips also had a previous domestic violence arrest in Florida, but he was not convicted in that case.

Fayetteville Police Chief Mike Reynolds said at a press conference that the motive and other details about the shooting remain under investigation, but said Phillips shot Carr point-blank in the head for no apparent reason. Carr had worked as a patrol officer since 2017.

Two officers ran outside of the police headquarters after hearing the gunshots and chased Phillips about 9:40 p.m. Saturday night, Reynolds said. The officers engaged Phillips in a shootout and killed him. No one else was shot. The other officers, identified as Corporal Seay Floyd and Officer Natalie Eucce, have been placed on paid administrative leave pending the investigation into the shooting.

The shooting happened while people gathered in Fayetteville Square to see the Lights of the Ozarks, a Christmas decoration display. Reynolds told reporters that more people could have been killed or wounded if the officers hadn’t stopped Phillips. Fayetteville is a city of about 85,000 people in northwest Arkansas near the state borders with Oklahoma and Missouri.

Here’s what you need to know about London Phillips:

1. London Phillips Was ‘Looking for an Officer to Kill,’ the Fayetteville Police Chief Says, Calling the Attack a ‘Cowardly Act’

Police Chief Mike Reynolds said Sunday at a press conference, “Last night was certainly the worst day in the history of the Fayetteville Police Department. We’ve lost one of our own.” Reynolds said, “All I know is that this was a cowardly act. And I have no information that leads me to believe he targeted this officer specifically. He was looking for an officer to kill, that’s the information at this time.”

According to Reynolds, surveillance video shows the suspect coming into the police department parking lot, approaching the officer while he was sitting in the car and then shooting him “in cold blood” at “point blank.”

Reynolds said the department would provide as many details to the community about the “murder of our officer,” as they are able to.

The armed suspect had a confrontation with officers resulting in the officers firing their weapons at the suspect. Directly following the shooting officers located Officer Stephen Carr shot inside his patrol vehicle, while parked at the police department. Officers immediately rendered aid to both the officer and suspect. At approximately 9:45PM, Fayetteville Fire Department and Central EMS arrived on scene and began life-saving efforts for both the officer and suspect. Both the wounded officer and suspect succumbed to their injuries and died at the scene. Evidence shows that Officer Carr was ambushed and executed while sitting in his patrol vehicle.

Carr was shot once in the head. Phillips was shot multiple times. The confrontation between Phillips and the officers lasted about 15 seconds, Reynolds said. He said the officers knew another officer was shot but did not know the extent of his injuries.

The investigation is ongoing.

“The Fayetteville Police Department has requested that the Washington County Sheriff’s Office, and the Federal Bureau of Investigations (FBI) conduct an independent investigation,” police said in a statement. “These are the details as we know them at this time. As more information comes to light we will make that available.” 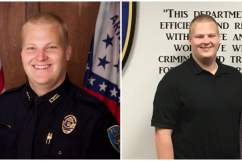 Stephen Carr: A Tribute to the Slain Fayetteville Police Officer

2. He Had Lived in Arkansas Since 2015 & Had Previously Lived in Florida, Louisiana & Missouri

Public records show that London Tyler Phillips has lived in Arkansas since 2015. He lived in Norfolk, Arkansas, from 2015 to 2018. He then moved to an apartment building on West Village Lake Drive in Fayetteville.

Phillips previously lived with his father and stepmother in Missouri, and with his mother in Florida. He also spent time living in Louisiana, according to public records.

Police were planning to search Phillips’ Fayetteville residence but it is not known if any evidence related to the shooting or a possible motive was recovered from there. Investigators are expected to question those who knew Phillips, including family members and friends, to try to learn what might have led up to the shooting.

Little information about Phillips’ time in Fayetteville has been made available. It is not yet known if he was employed, and if he was, where he worked. His mother and stepfather also live in Arkansas.

The suspect’s vehicle was located near the police station and was towed to the sheriff’s office for processing.

3. Phillips’ Mother Accused Him of Domestic Violence in 2012, Telling Police He Was on a ‘Psychotic Rollercoaster’ & Threatened to Burn Her

A screenshot from the domestic violence arrest of London Phillips in 2012.

London Phillips had one arrest while living in Florida, according to online records. The arrest on domestic violence charges occurred in 2017 in Palm Beach County. He was arrested on a simple assault charge on October 2, 2012, at his mother’s home on Ficus Lane in Lantana, Florida, where he was also living at the time, records show.

The responding officer wrote in his report that he was called to the home about 1:45 a.m. for a report of a domestic disturbance in progress. Phillips’ mother told the officer she had been in a verbal argument with her son and ran to her neighbor’s home to call 911. In a statement, Phillips’ mother wrote that her son had been on a “psychotic roller coaster” toward her all night.

She wrote that he had gone from saying, “mom I love you,” to “you f*cking b*tch,” in seconds. She said he hugged her several times and apologized, but then turned around and threatened her while hugging her, whispering in her ear, “I’ll burn you,” and then, “I’ll burn both of you,” a reference to his stepfather, according to the arrest report. She said he talked to her, “like a dog,” and demanded that she do things, and said, “I’ll only tell you one more time — that’s when he bowed up and I felt very threatened.”

The officer wrote that Phillips was in his bedroom. The officer said he did have a lighter in his pocket when he was arrested.

Arrest documents show that Phillips, born June 6, 1984, had a Missouri driver’s license at the time of his arrest. He was listed as being a white male, single and Christian. He was later released on $2,000 bail.

4. He Was Not Legally Allowed to Own or Carry a Firearm Because He Had a Medical Marijuana Card, Police Say

Fayetteville Police Chief Mike Reynolds said in April 2019, London Phillips pawned a gun at a local pawn shop. Reynolds said police were involved because the pawn shop would not return his gun. “It is my understanding he had a medical marijuana card and that disqualifies an individual from possessing a firearm in Arkansas,” Reynolds said.

Phillips would not be disqualified from owning a firearm as a result of his domestic violence arrest in Florida because he the case was dismissed by prosecutors after he completed the conditions of a diversion program.

According to Reynolds, Phillips had a 9mm Taurus handgun and two boxes of ammunition. It is not clear how he obtained the gun, and if it was legally owned, or if it was owned by someone else legally and taken by Phillips.

“If it wasn’t for the response of our officers that engaged and killed the suspect, yes I do believe that he would have hurt or killed people, possibly more officers or possibly citizens within our community,” Reynolds said.

5. A GoFundMe Has Been Set Up to Support the Family of the Fayetteville Officer Killed by Phillips, the City’s Police Chief Says

Memorial set up in honor of Officer Stephen Carr, killed in the line of duty. Chief Reynolds says Carr was a hero. #fayetteville pic.twitter.com/ebcPTZrDq4

Officer Stephen Carr was hired by the Fayetteville Police Department in April 2017. Carr, “was assigned as a patrol officer, currently working in the Dickson street entertainment district.”

The Fayetteville Police said, “He served our community with dedication and professionalism for the past 2 ½ years, he is a HERO. We would like to thank our community for their outpouring of support, along with our local, state, and federal law enforcement partners for their quick response and assistance. Our thoughts and prayers are with Officer Carr’s family during this tragic time.”

Carr was a former personal trainer and graduated from Southwest Baptist University in Texas with degrees in economics and finance. He was a Texas native, graduating from The Woodlands High School, where he was a star in football, wrestling and track and field.

A GoFundMe campaign has been set up by the local police union to help Carr’s family. “Arrangements are being made for a memorial service, and details will be released at a later time,” police said.

Reynolds said about Carr, “He was an all-American boy. He came from a law enforcement family. He knew what the job was about and he just wanted to serve his community.”

READ NEXT: Rapper Dies After Suffering Seizure at Airport

Loading more stories
wpDiscuz
0
0
Would love your thoughts, please comment.x
()
x
| Reply
London Phillips was an Arkansas man who fatally shot Fayetteville Police Officer Stephen Carr in an ambush "execution" before he was killed by other officers, police say.