Facebook Anthony Ferrill has been identified as the MillerCoors worker who opened fire at the company's Milwaukee brewery, killing five co-workers before fatally shooting himself, police say.

Anthony Ferrill has been identified as the longtime MillerCoors and Molson Coors brewery employee who is dead after he shot and killed five other workers at the company’s building in Milwaukee, Wisconsin, on the afternoon of February 26.  The brewery had been known as the MillerCoors Brewery until 2019, when the name was changed to Molson Coors.

Milwaukee Police Department Chief Alfonso Morales confirmed to the public that five people were killed by a 51-year-old Milwaukee resident, who has since been identified as Ferrill. His identity was first reported by Matthew Keys on Twitter. The victims have also been identified and can be read about here.

Police have not commented about his motive. Milwaukee Mayor Tom Barrett said at a press conference the day after the shooting, “Right now there is an investigation going on and I think it is premature to speculate on anything. I think this is the time to be there and grieve and to support the families. I’m sure there will be time in the future to talk about many things about this investigation.”

In a press conference on the Coronavirus pandemic, President Donald Trump said that five people had been killed at the brewery. The president referred to the suspect as a “wicked murderer.” That number was confirmed in a statement from Molson CEO Gavin D.K. Hattersley. In total, six people including the shooter were killed.

Barrett confirmed to the media around 4:30 p.m. local time that the shooter was dead, about two hours after the “horrific shooting.”

The mayor said, “It is a horrible, horrible day for the employees here. It is a very rough day for anyone who is close to this situation.” In addition to the local law enforcement agencies, the FBI, ATF and U.S. Marshals were also on the scene.

Molson Coors sent an email to employees at 2:19 p.m. local time to say there was an active shooter on the campus. The shooter was located near the second-floor stairwell in Building 4 of the complex, reported the Milwaukee Journal-Sentinel. The Milwaukee Police Department said they were first called to the brewery at 2:08 p.m. The Journal-Sentinel reported that Ferrill was armed with two guns, one with a silencer.

Here’s what you need to know about Anthony Ferrill and the MillerCoors shooting:

1. Anthony Ferrill, Who Worked at the Brewery for More Than 20 Years, Killed Himself After Fatally Shooting 5 Co-Workers, Police Say

Scanner traffic provided by Broadcastify saw an officer tell another that the shooter had killed himself. That same voice said that there were six other victims of the shooting. Police later said there were six total victims, including the shooter.

Anthony Ferrill, identified as the gunman, worked at the MillerCoors brewery, and later at the Molson Coors brewery, for more than 20 years as an electrician. He was listed on an IBEW Local 494 Facebook page post in September 2018 as one of several employees being honored by the union for reaching a milestone at the brewery. He had worked there for 20 years at the time, according to the post. The union has not commented on the shooting.

No one else was injured in the shooting. Froedtert Hospital in Milwaukee, four miles west of the brewery, was prepared to accept victims of the shooting but none arrived, the Journal Sentinel reported. That report was later backed up by Matthew Keys.

Froedtert is the only Level-1 trauma center in the area. That means it is the only hospital that can provide “the highest level of specialty expertise” in order to treat life-threatening injuries, according to national standards.

Anthony Ferrill with his children.

Digital journalist Matthew Keys reported at 5:22 p.m. local time that authorities had identified Anthony Ferrill as the suspect and that a search warrant was being executed at his home. Online records show that Ferrill lived along West Potomac Avenue in a home with three bedrooms and one bathroom, around five miles northwest of the brewery. Online records showed that the family lived there since 2004. The Journal Sentinel reports that the house was bought with the help of a Veteran’s Administration loan. Ferrill was a veteran of the United States Coast Guard, serving between 1987 and 1991 when he was honorably discharged.

JUST IN: Milwaukee Police have a large area blocked off on the NW side where a source tells us the suspect lived. Police activity appears to be focused on one house although it is not clear exactly what they’re doing. pic.twitter.com/KE9PsM1X35

Chief Morales said at the first press conference following the shooting that officials believed there was no further threat to the community and that Ferrill acted alone. During that press conference, Ferrill was described as a “Milwaukee man.”

Ferrill was married and had children, including a son and two daughters, according to his wife’s now-deleted Facebook profile. A Facebook page or social media belonging to Ferrill could not immediately be found by Heavy.

On her various social media pages, which have now been deleted, Ferrill’s wife posted photos of her family and expressing liberal political views. In July 2019, Ferrill’s wife attended a speech by U.S. Senator Elizabeth Warren at South Division High School Gym in Milwaukee. Following the speech, Ferrill’s wife took a photo with the Massachusetts senator. 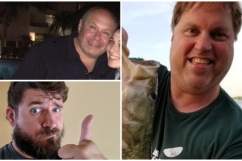 2. One of the Victims Was a Fellow Electrician Who ‘Frequently Argued’ With Ferrill

The Journal Sentinel reports that one of the victims was a fellow electrician at the brewery who Ferrill frequently clashed with. A friend of Ferrill’s, who was not named, told the newspaper that the issue arose because Ferrill was accused of watching movies on his phone during work hours. The pair had also accused each other of tampering with each other’s tools and going into each other’s offices.

Ferrill had also told a co-worker that he believed brewery employees were coming into his home and bugging his computer. That friend said, “I was, are you serious, Anthony? What? We all kind of joked about it, saying we should maybe get him an aluminum hat. Things just started getting weird. But he was dead serious about it.” In addition, a friend said Ferrill felt as though he was being racially discriminated by Molson Coors.

A former colleague, Philip Rauch, who retired from Molson Coors in April 2019, told the Journal-Sentinel, “He was a very good electrician, a very good worker, and I couldn’t say anything bad about the guy. Every time I worked with him he was always in a good mood.”

3. Ferrill & His Wife Were Involved in a Lawsuit That Included the MillerCoors LLC Health Benefits Program, Wisconsin Court Records Show

Anthony Ferrill does not appear to have a criminal record in Wisconsin except for a traffic ticket from 2016. Ferrill has been involved in multiple civil suits in Wisconsin, state court records show. The cases appear to deal with health issues.

In one lawsuit, from February 2015, Ferrill and his wife are listed as co-plaintiffs along with the MillerCoors LLC Health Benefits Program. The lawsuit was filed against the American Family Mutual Insurance Company. Details of that case were not immediately available.

A view of a sign above one of the Molson Coors campus buildings following a shooting on February 26, 2020, in Milwaukee, Wisconsin.

Ferrill sued the insurance company and another individual, along with that person’s wife and his insurance company, in 2013. Details of that case were also not available. Records show he was the defendant in two lawsuits filed in 2005 by the Medical College of Wisconsin, which is affiliated with the Milwaukee Regional Medical Center. Both of those small claims court cases appear to deal with medical billing.

4. One Report Says Ferrill Stole a Colleague’s Work I.D. in Order to Return to the Scene

CBS Chicago’s Jermont Terry was the first to report that Anthony Ferrill stole the work identification of another employee in order to return to the brewery campus after he had been fired. CBS Chicago reported that the shooting took place during a shift change.

But Molson Coors has called Ferrill an active employee. In a Facebook post, CEO Gavin Hattersley wrote, “Earlier today we received news of an active shooter on our Milwaukee Brewery campus. The police have since confirmed the shooter, who was an active brewery employee, is now deceased. There is no longer an active threat and our employees are in the process of being released to go home to their families.”

Unfortunately, I am devastated to share that we lost five other members of our family in this tragic incident. The police are still working to notify their relatives, so I am unable to provide more information at this time.

There are no words to express the deep sadness many of us are feeling right now. The most important thing is that we support and care for each other. We ask that everyone be respectful of how our colleagues in Milwaukee are feeling during this incredibly difficult time and do what you can to be supportive.

Please hold your family members tight tonight and keep the families of our fallen teammates in your thoughts.

Mayor Tom Barrett told the media in the initial aftermath of the shooting, “It’s a horrible, horrible day for the employees here. It’s a very rough day for anybody who’s close to this situation.” Later, Barrett told the media, “This is a time for us to think about those families because there were five individuals who went to work today, just like everyone goes to work, and they thought they were going to go to work, finish their day and return to their families. They didn’t, and tragically they never will.”

GettyA shooting at the MillerCoors brewery building, now owned by Molson Coors, was the scene of a shooting that left 6 people dead, including the gunman, who worked there, police say.

The Milwaukee office of Molson Coors Beverage Company employs 610 people. A recent restructuring plan from the company would see between 400 and 500 jobs eliminated from the company, reported Reuters. The cuts were expected to save the company around $150 million and move jobs to Milwaukee from Denver, where Molson is headquartered. The campus where the shooting took place is a mix of office buildings and brewing facilities.

According to Molson Coors’ Fortune page, the company employs 17,750 people worldwide. The company’s CEO is Gavin D.K. Hattersley. Molson acquired MillerCoors in 2016 and rebranded it as Molson Coors Beverage Company. Hattersley was in Houston at the time of the shooting with other executives as part of a company conference.

Loading more stories
wpDiscuz
0
0
Would love your thoughts, please comment.x
()
x
| Reply
Anthony Ferrill has been identified as the employee who shot and killed five people at the Molson Coors Brewery in Milwaukee, Wisconsin, on February 26.