Three Houston Police officers were shot at the end of a chase in the 2100 block of McGowen Street on Thursday, January 27, 2022. The suspect fled in a white Mercedes after shooting at officers with a fully automatic handgun, police said. The officers were taken to Memorial Hermann Hospital, where they were in stable condition, the Houston Police Department said on Twitter.

The Houston Fire Department said one officer was transported by ambulance with a single gunshot wound about 3:13 p.m. The other two officers were taken to the hospital in police vehicles. All three officers were talking and alert at the hospital and in “good spirits” with non-life-threatening injuries, officials said. The shooting happened in the city’s Third Ward. The suspect was identified by Houston CrimeStoppers as Roland Cabellero. He barricaded himself in an apartment after the shooting and was later taken into custody, police said.

Houston Police Chief Troy Finner said the incident started about 2:40 p.m. Police had been pursuing a suspect in a Dodge Charger before the shooting. After the shooting, the suspect carjacked a white Mercedes, according to police radio transmissions. He was armed with a Glock pistol that was modified with a “switch” to be fully automatic, according to police radio transmissions.

HPD SWAT & Hostage Negotiation Teams are on scene of a barricaded male suspect inside a home in the 1800 blk of Lockwood. The suspect fired multiple shots at SWAT officers. No officers hit. The standoff is ongoing.

You can listen to police scanner audio, obtained by Heavy on Houston via Broadcastify.com, from the chase and shootout below:

Surveillance video obtained by ABC13 Houston, which can be watched above, shows officers exiting several police vehicles and firing shots down McGowen Street. Dozens of shots can be heard during the shootout in the surveillance video, which was recorded at a nearby home or business. The video shows officers taking cover, including behind a patrol SUV that was smoking and riddled with bullets.

According to ABC 13 Houston, witness Riley Hollister said he heard, “more than 30 rounds or something.” Houston Police Officers Union president Doug Griffith told the Houston Chronicle one of the officers was shot in the arm and another in the leg. “Their car is shot to s***. How they made it out of there without being more severely injured is amazing,” Griffith told the newspaper. Griffith told the Chronicle the officers had been trying to arrest a man accused of shooting at his girlfriend’s house on Tralle Street.

Another witness, Stephen Hinson, told KHOU, “All of a sudden, I heard popping noises and I didn’t think it was gunshots, but then all of a sudden it started getting closer and it sounded like about 50 rounds went off. I looked out my window and I saw the officers running and I realized there was an officer down right in front of my townhome.”

Houston Mayor Sylvester Turner said in a statement, “Three Houston Police Officers were shot in the line of duty today, and I am relieved to hear their injuries are non-life-threatening. My thoughts and prayers go out to them, and I will be at the hospital soon to check on their recovery, thank them for their service and speak to their families. I ask everyone to pray for the officers who were shot and for every law enforcement officer working on the streets of Houston. We live in dangerous times, and it will take all of us working together to make our city safe.” 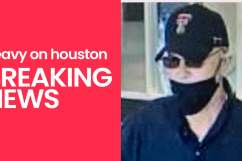 The shooting comes after three Houston-area law enforcement officers were killed in separate incidents. Harris County Sheriff’s Deputy Amanda Crowder died of an apparent self-inflicted gunshot wound to the head during an incident in a vehicle on January 17, 2022. Crowder was in a truck being driven by an off-duty Houston firefighter and investigators believe she shot herself during an argument. The off-duty firefighter, who was in a relationship with Crowder, drove to a nearby fire station. Crowder was rushed to a hospital and later died. She is survived by two daughters.

On January 23, Harris County Constable Precinct 5 Corporal Charles Galloway was ambushed and killed during a traffic stop in Southwest Houston. Dozens of shots were fired at Galloway before he could exit his vehicle, according to police. Oscar Rosales, 51, was arrested in Mexico on January 26 and charged in Galloway’s murder, according to Houston Police.

Additionally, Houston Police K-9 Nate was stabbed on January 22, while chasing an attempted carjacking suspect who had fled from officers on foot. Nate was rushed to an animal hospital and underwent surgery and is recovering. Ryan Mitchell Smith, the suspect accused of stabbing Nate, was later released from jail on bond and is now suspected of killing his father. Smith was re-arrested without incident after his father’s death.

“It’s been a tough week for law enforcement and it’s been tough week for the city as a whole, as well as the county,” Mayor Turner said. “What it indicates again that being a police officer or in law enforcement is an inherently dangerous job. Every single day, when these police officers leave their homes they go on their particular shifts not knowing what they are going to encounter that day. I cannot tell you how proud I am of every single law enforcement officer that serves our city, that gives their all in the service of our city.”

Finner said, “No more excuses. Everybody take an active role and get intentional in doing whatever you can do to fight gun violence in our city. Period. It’s not really a difficult thing. Bad, dangerous people, there’s a place for them. And that’s in jail.” 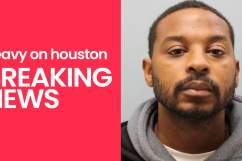