Getty Supporters of US President Donald Trump, including Jake Angeli (C), a QAnon supporter known for his painted face and horned hat whose real name is Jacob Chansley, enter the US Capitol on January 6, 2021, in Washington, DC. - Demonstrators breeched security and entered the Capitol as Congress debated the a 2020 presidential election Electoral Vote Certification.

Jake Angeli, a well-known QAnon influencer known as the “Q Shaman,” was a central figure in the January 6 siege on the Capitol, making his way into memes and photos with his conspicuous horned helmet. Angeli has since been arrested. His real name is Jacob Anthony Chansley.

Chansley took photos behind the Senate dais and was seen walking around the Capitol building with a bullhorn, wearing his signature horned hat and red, white and blue face paint.

He has also held a leading role at far-right rallies in Phoenix, according to The Arizona Republic. He told the newspaper that QAnon validated beliefs he has held since about 2016.

On Saturday — three days after the Capitol riot — the U.S. Attorney’s Office announced Chansley had been arrested, in addition to Derrick Evans, 35, of West Virginia, a newly elected delegate, and Adam Johnson, 36, of Florida, who was identified as the man carrying Speaker of the House Nancy Pelosi’s podium in a photo. 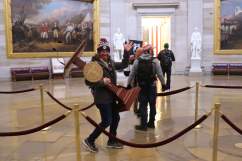 Chansley was arrested on charges of knowingly entering or remaining in any restricted building or grounds without lawful authority, and with violent entry and disorderly conduct on Capitol grounds, the statement said.

Chansley told The Arizona Republic he chooses his protest outfit to attract attention. He appears at protests shirtless, wearing red, white and blue face paint, a horned helmed and ragged pants. He said that attention helps spread his message from QAnon.

“The snowball has been rolling and it’s only getting bigger,” Chansley told the newspaper in February 2020. “We’re the mainstream now.”

At the time, he was a central figure at a protest for Trump in Phoenix.

2. Chansley Said QAnon Affirmed Beliefs He Held Since 2016 & He Shares the Message at Pro-Trump Rallies

The Arizona Republic has reported on Chansley appearing at multiple protests in the Phoenix area, always in support of Trump. At a protest in February 2020, he held a tattered sign that said “Q sent me” and asked others in the crowd if they were familiar with QAnon, getting some affirmative nods in response, the newspaper reported.

“You all know who Q is?” he shouted to a passerby.

He told them that Q was “a government agent who wanted to ‘take the country back’ from pedophiles and globalists.”

He was also pictured by the newspaper in August 2012 at the state capitol, protesting the closure of schools due to COVID-19.

The Independent reported he had a profile on Backstage.com looking for acting work, but that profile was later taken down. The acting page in part perpetuated theories he was a paid actor or member of Antifa.

3. Chansley Also Appeared at a Black Lives Matter Rally to Talk About QAnon

Chansley has appeared at multiple rallies in the Phoenix area carrying the message of QAnon. This spurred a theory that the violent protesters storming the Capitol building were not Trump supporters, but Antifa. The Arizona Republic has recorded Chansley at multiple Phoenix rallies but said he was always promoting the QAnon message.

He appeared at a Black Lives Matter protest in the Phoenix area, where he perpetuated the claims of QAnon.

“He said he attended those events to spread the word of the QAnon conspiracy theory, which falsely imagines that Trump is investigating corruption and crimes against children committed by high-level politicians,” The Arizona Republic reported.

Former Governor of Alaska Sarah Palin was among those to share the theory that the Capitol rioters were not actual Trump supporters.

“Media: quit labeling DC protestors ‘Conservatives, Republicans, Tea Partiers, Trump Supporters, etc’ LOOK IN TO WHO THESE PEOPLE ARE who’d choose an apparent leaderless insane swarm to create a perception of condoned violence. KNOCK IT OFF,” she wrote on Twitter. “And to any insincere, fake DC ‘patriots’ used as PLANTS – you will be found out.”

4. Chansley Said He Has Completed His Own Research That Shows Groups Like the Illuminati Control the World

The guy in #redface who stormed the capitol today is Arizona right-winger Jake Angeli. It’s not a coincidence that an iconic image of white nationalism in 2021 is a dude playing Indian. https://t.co/D8KFTeRVb2

Chansley told The Arizona Republic his beliefs were cemented by internet research and by the book Behold a Pale Horse. The book was written by Arizona author William Copper and references groups like the Illuminati, Trilateral Commission and Bilderberg group, which Chansley says control the world.

“At a certain point, it all clicked in a way,” he told the newspaper. “Oh, my God. I see now the reality of what’s going on.”

Cooper was killed by authorities “in a burst of gunfire outside his hilltop home in eastern Arizona,” the newspaper reported. Chansley said in an interview Cooper was killed by the government to silence him. The Los Angeles Times reported Cooper was a wanted militia figure who vowed he would never be taken alive.

“When you really do enough research, it all ties together,” Chansley said.

5. Chansley Claimed Capitol Police Tried to Stop Him, Eventually Let Him in & Then Asked Him to Leave in a Disputed Claim

Journalist @marcusdipaola, who took the video, says this is false — cops did not open the barrier. Interview in thread: https://t.co/mJUpIsiQhd

Chansley claimed that Capitol Police let him into the building in a claim that was disputed by other people who were there.

“They definitely didn’t just open the barriers, the pro-Trump rioters made a fist like they were going to punch the cops, which is why I started recording, then they backed off the barricades. Completely outnumbered, there wouldn’t have been any point in fighting,” witness Marcus DiPaolo said in an interview with New York Magazine’s Justin Miller.

DiPaolo took a video that has been widely circulated on social media, with people saying it looked like cops let the protesters through the barrier.

He added “No, the barrier was there, protesters just pushed it aside and the cops abandoned their post.”

DiPaolo continued, saying the superior officers did not give adequate reinforcements, “hoping to avoid inflaming tensions.”

Early in the protest, about 15 minutes before the breach, he said police were outnumbered “100 to 1.”

“The cops ran to the steps to try to form a line with their asps, got overwhelmed and pushed back up to the top,” DiPaolo said.

I spoke with Jake Angeli, the QAnon guy who got inside the Senate chamber. He said police eventually gave up trying to stop him and other Trump supporters, and let them in. After a while, he said police politely asked him to leave and let him go without arrest

Chansley was one of those who claimed the police let protesters into the Capitol. Adrian Morrow of the Globe and Mail in Toronto wrote on Twitter, “I spoke with Jake Angeli, the QAnon guy who got inside the Senate chamber. He said police eventually gave up trying to stop him and other Trump supporters, and let them in. After a while, he said police politely asked him to leave and let him go without arrest.”

Loading more stories
wpDiscuz
0
0
Would love your thoughts, please comment.x
()
x
| Reply
Jake Angeli, a well-known QAnon influencer known as the "Q Shaman," was a central figure in the siege on the Capitol yesterday, making his way into memes and photos with his conspicuous horned helmet. He was arrested, and his real name is Jacob Anthony Chansley.