Live video of protests inside and outside the U.S. Capitol building showed a bloodied woman being taken out of the Capitol on a stretcher after one person was shot and injured in the building. The woman has now died, according to NBC. The woman has been identified as Ashli Babbitt.

MSNBC aired the footage, which you can view here or below. Be forewarned that the video is graphic. The Associated Press confirmed one person was shot and injured. The victim was taken to the hospital, and CBS 58 reported she was in critical condition at the time. The Senate floor was cleared of protesters at about 3:30 p.m., the outlet reported.

Protesters supporting President Donald Trump breached the Capitol building as Congress was debating whether to block certification of electoral votes for President-elect Joe Biden. The discussion ended abruptly as officials were whisked away and an emergency alert told those inside to take shelter.

GRAPHIC: MSNBC shows video of a person being wheeled out of the Capitol on a stretcher, covered in blood and in very bad shape. pic.twitter.com/W6jKaXDudK

The video came at the same time as reports of a person shot inside the Capitol building. It was not immediately clear whether the woman had been shot. Lindsay Watts, a reporter for Fox 5 DC, wrote on Twitter that a person was shot and that resuscitation was being attempted.

“BREAKING: DC paramedic source tells me one person shot in Capitol. CPR in progress,” she wrote.

A video was posted on Twitter that captured the shooting itself and shows close-up footage of the victim. A person shared the video on Twitter, writing that “a young woman was just shot in the neck right besides me in the Capitol Building.”

The video shows a crowd of people milling around and bumping into each other, followed by the sound of gunfire and people yelling, “Active shooter!” One person is seen lying on the ground while a person nearby holds hands up. Another person tends to the woman on the ground, who has a significant amount of blood on her face. A person on the video screams, “Help her!” and, “Come on!”

Another voice says, “She’s gone, man,” followed by a voice shouting, “You can’t save her from here! We gotta get EMS here! Get back!” 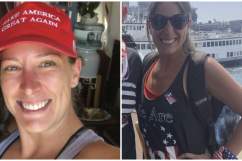 As U.S. Senate members debated whether to object to the certification of votes for Biden, pro-Trump protesters were amassing outside. About two hours and 15 minutes into the joint session of Congress, protesters breached the Capitol building, cutting off the discussion mid-speech.

The Congressional meeting is typically a ceremonial affair. This year, some GOP lawmakers planned to file objections to certify votes for Biden in key states. Senate Majority Leader Mitch McConnell was one of the Republicans to take a stance against the objection. He said in a speech that if the election was overturned, “Democracy would enter a death spiral.”

“The voters, the courts, the states have all spoken. They’ve all spoken. If we overrule them, it would damage our republic forever,” he said. “This election, actually, was not unusually close.”

Senator Ted Cruz was among the Republicans in favor of the objection, which came when Vice President Mike Pence asked for any objections to certify the vote in Arizona.

Loading more stories
wpDiscuz
0
0
Would love your thoughts, please comment.x
()
x
| Reply
Live video of protests at the U.S. Capitol building showed a bloodied woman being taken out on a stretcher, and reports said a person was shot in the building and died.