Quawan Charles was a 15-year-old Black boy who was found dead in a field in rural Louisiana on November 3. A preliminary autopsy report suggested drowning as his cause of death, but the local sheriff’s office has since said the investigation is ongoing, and that they are treating his death as a “homicide.” Quawan’s family has commissioned an independent autopsy, to be done in the coming days.

Quawan’s family were the first to criticize the initial claim that he had drowned. His cousin Celina Charles told The Washington Post that explanation was “bogus” and said, “His face says different.”

Quawan’s family has since released a photo of the teen taken after he was found. They’ve compared the photo to the infamous photograph of Emmett Till after his death.

Emmett, 14, was murdered by two white men in 1955 after being falsely accused of whistling at a white woman; that woman has since recanted her story. According to the History channel, Emmett’s mother chose to have an open-casket funeral and display her son’s body for five days.

“Till’s mother said that, despite the enormous pain it caused her to see her son’s dead body on display, she opted for an open-casket funeral to ‘let the world see what has happened, because there is no way I could describe this. And I needed somebody to help me tell what it was like,'” the History article said.

Thousands of people came to pay their respects to Emmett. The History channel said the boy’s death “provided a catalyst for the emerging civil rights movement” and “galvanized civil rights activists nationwide.”

The family of Quawan "Bobby" Charles, local activists and other community members took to the streets of a small Louisiana town to demand transparency into the 15-year-old's disappearance and death. https://t.co/Ae2d4M88lR

According to his family, Quawan disappeared on October 30. His disappearance was noted when his mother tried to pick him up from his father’s house to take him to a haircut, and his father kicked down his bedroom door to find the room empty. The Charles family contacted local authorities that day, the New York Times reported. The family then contacted Iberia Parish Sheriff’s deputies on November 3 to ask for help in the search.

After pinging Quawan’s cellphone, authorities were able to find his body within hours. The teen’s family and their lawyer Ronald Haley have since criticized local authorities for taking several days to ping his phone.

The preliminary autopsy report from the Iberia Parish coroner said Quawan died by drowning, citing muddy water found in his airways and hyper-inflated lungs. As for his disfigured face, Haley said investigators claimed this was the result of wild animals gnawing on his face.

In a statement, Haley challenged the findings of the preliminary report. In particular, he noted that the only bodies of water found in the sugar cane field where Quawan’s body was found were all less than 2 feet deep.

Per The New York Times, Haley said, “If in fact he did die of drowning — and we’re saying that as an if — we’re calling into question how exactly that would have happened. Can somebody who’s 5-foot-6 typically drown in 2 feet of water? No, not unless there’s another cause associated with that.”

Chase Trichell, another lawyer representing the Charles family, said, via NBC, “No able-bodied 15-year-old is going to drown in ankle-deep water without some outside influence that contributed to his death.”

Here’s the photo of Quawan that the Charles family released, which was taken after his body was found on November 3: 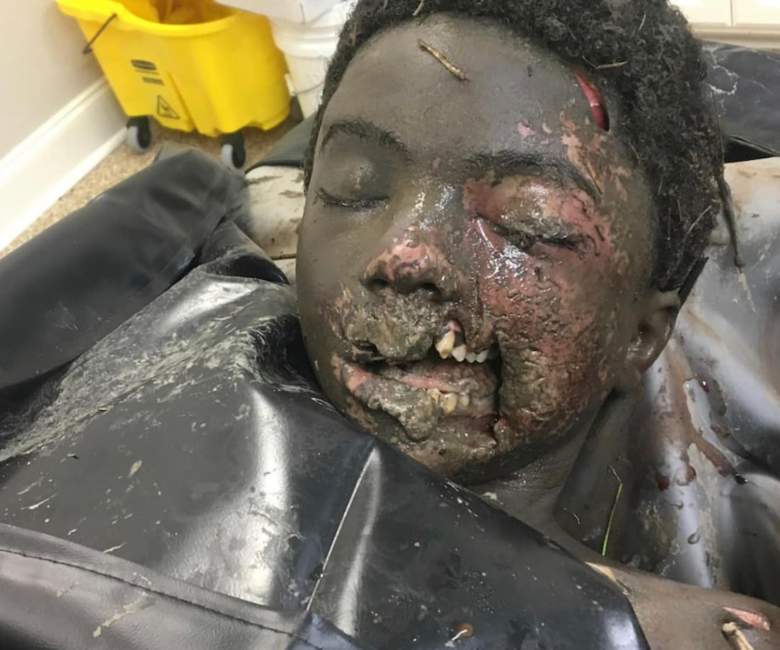 Andre Arcenaux, a local activist and a founder of advocacy group Stand Black, was with the family when they saw a photo of Quawan’s disfigured face for the first time. He told The New York Times the family immediately likened the image to the photo of Till from 1955. Arcenaux explained why Quawan’s mother felt the need to share the photo with the public:

Down in Iberia Parrish Louisiana, a white woman named Janet Irvin claims to have picked up a 15 year old Black child #QuawanCharles from his home without his parents permission in order to hang out with her son Gavin.

Quawan’s badly beaten corpse was found in a lake nearby

Per the Washington Post, Quawan’s family confirmed through another source that the boy was picked up by his 17-year-old white friend, Gavin Irvin, and that friend’s parents, Janet and Alvin Irvin, at 3 p.m. on the day he went missing. The Irvins have since confirmed they picked up Quawan and that he spent some time at their house before leaving later that night.

Quawan’s father, Kenneth Jacko, said, “[Gavin] said Quawan got up and said he was leaving. [Gavin] asked about where Quawan was going, and after that, he disappeared.”

The sheriff’s office visited the Irvins’ home on November 3, a spokesperson reported, but there has been no confirmation that any of the family members are being treated as suspects.

Quawan’s mother has said she wants the Irvins, particularly Janet Irvin, to be held “accountable.”

“I want the lady who came to get my son without my permission, his dad’s permission, to be held accountable,” she said at a recent vigil for her son. “She took them to her house. He was alive and well when he was here, and now he is dead.”

READ NEXT: White Mother & Son Were the Last People With Quawan Charles

Read More
Crime
Quawan Charles’ death is being investigated as a homicide. His family recently released photos taken during his autopsy, comparing his face to Emmett Till’s.