Instagram Lisa's official Instagram page is flooded with pictures of buff, tattooed men, while Usman's has a video of a woman dancing in a thong. Were they hacked?

It looks like Lisa and Usman, stars of the hit reality series 90 Day Fiancé: Before the 90 Days, might have been hacked on Instagram late Sunday night. Although we can’t be certain that they weren’t posting of their own volition, Lisa’s page was flooded with pictures of buff, half naked men out of the blue Sunday, while Usman’s page featured a video of a partially nude woman dancing, which is very off-kilter for both of the reality stars’ usual posts.

Although nothing has been publicly addressed by either star as of 9:26 p.m. CT, it appears that somebody may have hacked their pages in order to stir up some drama, or the reality stars have split up and are lashing out at each other on Instagram. Unless Lisa and Usman really did split up and are trying to aggravate the other by posting a bunch of sexually charged pictures and videos, they might have been hacked.

Update 3/30/2020: Lisa has since posted several cutesy pictures of her and Usman together on Instagram, including a few screenshots of the music video premiere, and Usman aka Sojaboy posted a clip of last night’s episode while “presenting Baby Girl Lisa” to the world, so it doesn’t appear that the two really split up, or that they were hacked. Both stars still have all of the strange, random photos and videos up on their respective pages, so it’s unclear what is going on at this time. Possibly a ploy for attention and new followers? Who knows. Keep reading for details:

Lisa’s Page is Flooded With Pictures of Ripped Men 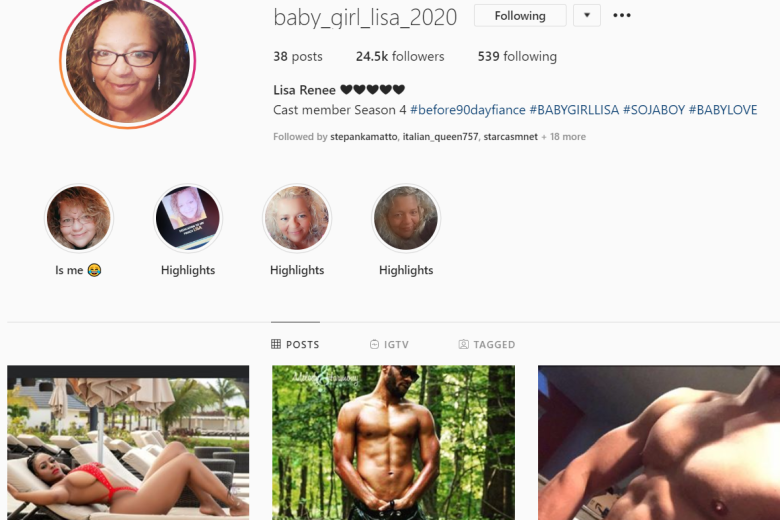 Lisa’s Instagram page is filled with pictures of scantily clad men, as of Sunday, March 29.

Lisa’s official Instagram page was flooded with pictures of fit, tattooed men, and all of the pictures were posted between 8 p.m. and 9 p.m. CT. Though we can’t be certain the reality star was really hacked, the pictures are very out of character from her normal Instagram posts, which usually involve selfies, memes, pictures of her and Usman, and a few promos of the new season.

Each of the new pictures tags a different Instagram account, and each of them has an unusual caption, such as, “I don’t care what he is fixing mine just broke,” and “Lawd yes I would love to be quarantined.” Another picture, which shows a scantily clad woman laying on a beach chair, reads, “Therea Lclassic beautiful woman an fantastic entertainer.”

Lisa’s page was recently wiped clean of the collages and pictures she had once posted of her and Usman together, and she no longer follows Sojaboy on Instagram, so they very well could have broken up and are just lashing out at each other on social media. However, we still find the pictures and video to be odd, and are impatiently waiting for Lisa and/or Usman to address the pages.

Lisa’s stories featured this post, which appeared to call Usman a “f–k boy.”

Update: Lisa posted a now-deleted picture in her stories (which can be viewed above) that read, “@officialmaryambooth @officialahmedino @ay_pilot_one you give fuck boy Sojaboy truth will all be revealed Tonight so come one come all truth is coming.” We aren’t sure what she’s referencing or why she posted the story at this time. 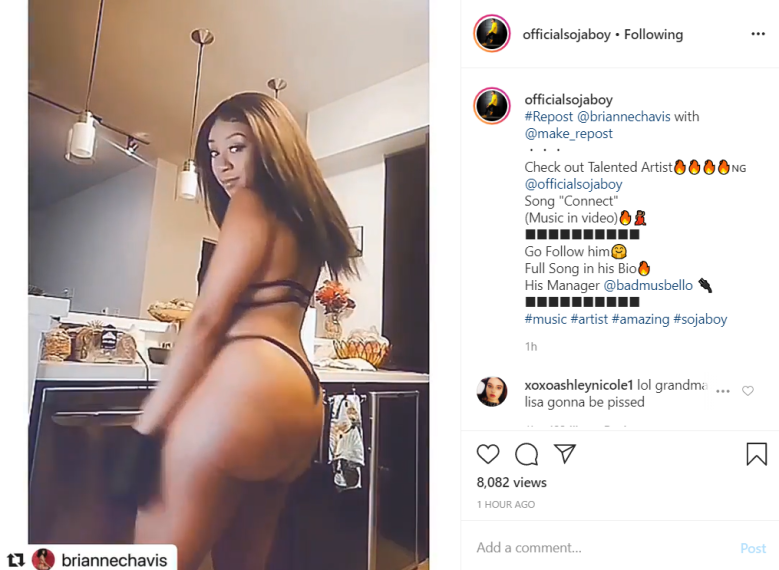 A screenshot of the video posted on Sojaboy’s Instagram page.

Usman’s official artist page posted a video of a pants-less woman twerking to one of Sojaboy’s songs, titled “Connect.” The video was posted at approximately 8:30 on Sunday, March 29, shortly before the new episode of 90 Day wrapped up.

The caption of the video, which can be viewed in the screenshot above, reads, “#Repost @briannechavis with @make_repost. Check out Talented Artist @officialsojaboy, Song “Connect” (Music in video). Go Follow him, Full Song in his Bio.” The caption also adds a link to his manager, according to the poster. “@badmusbello,” and was followed by several hashtags: #music #artist #amazing #sojaboy.

Knowing how jealous Lisa is towards Usman’s female fans and any woman who messages him on Instagram, we don’t believe Usman would readily post the video without risking his relationship with Lisa, unless the two were already broken up.

Even commenters knew something was off after Usman’s page posted the video; the video was filled with comments like, “Baby Girl Lisa gonna be mad my dude,” and “Oh wow, she looks nothing like baby girl Visa LOL… You better come get YO man.” Another user added, “Ummmmm Lisa and him clearly aren’t together anymore cuz this is not allowed by her,” so fans are catching on that something is up.

Again, we can’t be certain that they were hacked until one or both of the reality stars releases a statement or addresses the pictures and video; however, something is definitely going on between the two, so we’ll continue to wait impatiently for them to address the Instagram changes.

READ NEXT: 90 Day Fiancé: Before the 90 Days S4 Couples Still Together Predictions

Read More
90 Day Fiance, Reality TV, TV
Lisa's official Instagram page is flooded with pictures of buff, tattooed men, while Usman's has a video of a woman dancing in a thong. Were they hacked?