The search for the suspected murderer Chris Dorner has raised concerns from all sides over the prevalence of racial profiling, as zealous L.A. police desperate to catch the alleged cop killer are following countless leads of sightings that “match the description.”

I got some friends who are large, black men, who have bald heads, who should be concerned.

And the $1 million price put on Dorner’s head has only fueled the flood of tips from the public.

According to FOX 5, some blood has already been unnecessarily shed in this pursuit.

Strangely, the highest-profile and most tragic misidentification in the manhunt involved two innocent victims who were neither black nor male.

Officers shot at a vehicle that they mistakenly believed that Dorner was inside, wounding two women who were delivering newspapers. Margie Carranza only suffered minor injuries, but her mother, Emma Hernandez, was shot in the back and is still in the hospital.

How two Hispanic women were mistaken for a large, bald black man is still unclear. The officers say their truck resembled the one driven by Dorner, even though it was a different make, different color, and had a different license plate number.

In another case, cops cornered a man matching Dorner’s description at a San Diego motel: 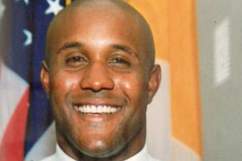 Some have tried to make light of the situation by wearing shirts like the one above or using bumper stickers with a similar message, but the fact still remains that any kind of profiling is inherently problematic and divisive. The question of Dorner’s mental health has started a heated debate, with some saying the question is a deflection while others say that a man who thinks he can take on a city’s police force is not of full mental capacity.

A drone search has now been implemented in the search for Dorner, which has drawn out a barrage of opinions on either side. A senior police source told MSN, “The thermal imaging cameras the drones use may be our only hope of finding him. On the ground, it’s like looking for a needle in a haystack.”

As if to ask African-Americans to stay complacent over the profiling, San Diego’s Black Police Officer Association has issued a list of “helpful tips” avoid further problems, which read as follows:

-If you are stopped or confronted by officers, cooperate and follow instructions.
-Do not escalate the situation by becoming argumentative, belligerent or non-compliant.
-Once the situation has de-escalated, ask the officers for an explanation.
-Be willing to listen what the officer has to say. The consequences of failure to comply are high for everyone involved, citizens, and law enforcement officers included.

The fact that Dorner alleges that he was fired for his race makes the profiling even more of a hot button.

Some have apparently taken Dorner’s side, even starting a Facebook group and tweeting their support.

I’m not saying I support Dorner but I do understand .

Chris #Dorner Triggers An Avalanche Of Support On The #Internet Some Hailing Him A Truth Fighter fb.me/2dI6djfIc

Loading more stories
wpDiscuz
0
0
Would love your thoughts, please comment.x
()
x
| Reply
The profiling is so widespread in the manhunt that there's a list of "helpful tips" for black men wrongly stopped by the cops.