Four women, including one who was pregnant, and a man were killed and three others were wounded in a mass shooting Wednesday night in Wilkinsburg, Pennsylvania, police tell WPXI-TV reports.

The shooting was reported just before 11 p.m. Police remained on the scene early Thursday morning and said there were no suspects in custody.

The incident occurred in the 1300 block of Franklin Avenue, a residential area in the Pennsylvania borough, which is near Pittsburgh.

Police identified the victims as Jerry Michael Shelton, 35, Brittany Powell, 27, and Chanetta Powell, 25, who are siblings, and Tina Shelton, 37, and Shada Mahone, 26, the Pittsburgh Post-Gazette reports. Chanetta Powell was pregnant.

“We haven’t seen something like this for quite some time,” Zappala told reporters. “It’s one of the most brutal shootings I’ve seen.”

1. The Second Shooter Opened Fire as Victims Tried to Get Into a House, Police Say

As many as 40 evidence markers behind Wilkinsburg shooting scenes where multiple fatalities reported #wpxi pic.twitter.com/SvszZWaByz

Police said at a press conference that there was a party going on in a backyard alleyway behind a house on Franklin Avenue when the two gunmen ambushed the victims.

After the first gunman opened fire, sending the partygoers scrambling to get into the house, a second shooter fired at them as they tried to get inside, police said in a press release. Four victims were found dead on the back porch of the home, according to police.

Alleyway behind house with shell casings is Hazel Way in Wilkinsburg pic.twitter.com/DRGdBZyVIa

You can watch the police press conference below:

Family members could be heard screaming in agony after learning about the shooting. One woman could be seen on live video collapsing to the ground and being held back by another person as she tried to break through police tape to get to the home.

Mourners heard in background of live shot at scene of mass shooting in Pennsylvania (WPXI) pic.twitter.com/EgJ4SJO0Rp

There were several evidence markers visible in the alley.

Believe there were multiple gunmen – fired into backyard party pic.twitter.com/RKWUS6fW8L

A neighbor, Kayla Alexander, told WPXI-TV that the neighborhood is typically quiet, with a lot of children living there.

2. At Least 25 Gunshots Were Heard by Witnesses

At least 25 gunshots were heard by witnesses, according to KDKA-TV.

Seven ambulances were called to the scene, the news station reports.

You can listen to police radio broadcasts from the incident below, courtesy of Broadcastify.com:

You can listen to more audio from the incident here.

Police said it appears the gunmen fired from two angles.

“It went on for almost a minute,” neighbor James Boyd told the Pittsburgh Post-Gazette. “I thought it was maybe the pipes bursting. But then we realized it was gunshots. We’ve had trouble in this neighborhood before but never this close to home. I’ve never seen anything like this before.”

Boyd said he has lived two houses down from the crime scene for about 25 years. 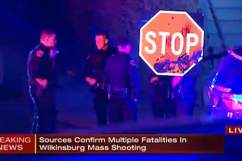 3. Police Are Searching for At Least 2 Suspects in the Shooting

Police told reporters at least two suspects are being sought in the shooting. It is not known if the suspected gunmen have been identified.

The men were seen running from the area, witnesses told WPXI-TV.

A police K-9 could be seen searching the area and a witness said no one was being allowed into the area near the shooting.

4. Four Victims Were Taken to the Hospital After the Shooting

Four people were taken to local hospitals with injuries after the shooting, WPXI-TV reports.

One of the victims died at the hospital. Four others were pronounced dead at the scene.

According to police, two men are at the hospital in critical condition and a female is stable condition.

5. Wilkinsburg Is a Borough of About 15,000 People Neighboring Pittsburgh

Wilkinsburg is a city of about 15,000 people in Allegheny County, Pennsylvania. It is about 8 miles away from Pittsburgh.

According to the Pittsburgh Post-Gazette, there were five homicides in Wilkinsburg last year. There have been no homicides in 2016 prior to Wednesday night. 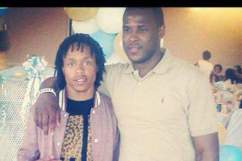 Read More
5 Fast Facts, Breaking News, Crime, Pennsylvania, Police
wpDiscuz
8
0
Would love your thoughts, please comment.x
()
x
| Reply
Four women and a man were killed and three others were wounded in a shooting in Wilkinsburg, Pennsylvania. No suspects are in custody, police say.