President Barack Obama endorsed Hillary Clinton today in a video the former Secretary of State released this afternoon. The video was posted just after Obama met with Clinton’s rival, Bernie Sanders, who has vowed to keep the race going until the party convention in Philadelphia next month.

In the video, Obama reminds viewers that the Democratic Party seemed split before he won the 2008 nomination, but he and Clinton came together then. He praised Clinton for becoming his Secretary of State even after their own bitter campaigns. Obama expects the same to happen now and praised Sanders for his campaign. Still, he said, “I’m with her.”

“I don’t think there’s ever been someone so qualified to hold this office,” Obama said of Clinton.

“I had a great meeting with him this week and I thanked him for shining a spotlight on issues like economic inequality and the outsized influence of money in our politics and bringing young people into the process,” Obama said of his meeting with Sanders. “Embracing that message is going to help us win in November, but more importantly, it’ll make the Democratic Party stronger, and it will make America stronger.”

Obama’s support for Clinton is hardly a surprise. He came very close before, even once saying she would make a “great” president in an ABC News interview back in 2014.

After Sanders’ meeting with the president, Sanders told the media that he will work hard to make sure Donald Trump isn’t elected president. “Needless to say, I am going to do everything in my power and I will work as hard as I can to make sure that Donald Trump does not become president of the United States,” he said.

Honored to have you with me, @POTUS. I'm fired up and ready to go! -H 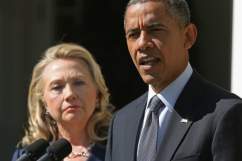