Getty Police at the scene of a shooting in Great Mills.

A 16-year-old girl and a 14-year-old boy were injured in the shooting, NBC Washington reports. The shooting happened just before 8 a.m. in a hallway at the school. The female victim is in critical condition, with life threatening injuries, while the male is in good condition.

Students quickly reacted to the shooting on social media.

“The bell hasn’t even rung for 1st and the whole great mills is on lockdown,” a student tweeted just after 8 a.m. “You would never think this would happen to you.”

Another student, Mollie Davis, tweeted, “Hi Twitter. I am in Great Mills HS. My school is on a very real lockdown threat and there’s already someone possibly dead. Please pray for us.”

This is a developing story and will be updated as more information is made available:

1. The Sheriff Says There Is Believed to Have Been a Previous Relationship Between the Shooter & the Female Victim

St. Mary’s County Sheriff Tim Cameron told NBC Washington that a student opened fire in a hallway at Great Mills High School, wounding two other students. The gunman then exchanged fire with a school resource officer and was also injured.

The shooter was taken to a hospital, where he was pronounced dead about 10:40 a.m., Cameron said at a press conference.

Cameron said the SRO and witnesses are being interviewed by detectives.

The sheriff said the shooter shot at the female student and another student, a male, was also injured.

Cameron said there is believed to be a previous relationship between the shooter and the female victim. According to posts on social media, the shooter was possibly the boyfriend or ex-boyfriend of the girl who was shot.

Cameron told NBC News that the school resource officer, who has not been identified, “quickly” responded during the chaos after the first gunshots rang out.

“This is your worst nightmare,” Cameron told NBC News.

Video recorded outside the school and posted to Facebook shows officers arriving:

Mollie Davis, a student at the school, tweeted, “There was a loud sound and everyone started screaming and running.”

Another student, Jonathan Freese, told CNN he was in math class when the shooting occurred, “I’m still a little shaken up. I didn’t really expect for this to happen. I do always feel safe, though, because they always have police at the school.”

Terrence Rhames, a senior, said he was walking to class when he heard a loud gunshot.

“I heard one shot and when we ran, we saw a teacher and he was looking at us with a confused look,” Rhames told NBC News. “We were trying to figure out if this is real. It was just shocking. You hear about shootings you never think would happen to you.”

Davis told Buzzfeed News, “I was in my classroom upstairs, which is next to the stairs. I heard what sounded like a balloon pop and commotion. I thought it was a fight as did my class. A few of them ran out to see and then ran back in saying someone yelled ‘gun’ and people were running out of the school. Our teacher came in [and] closed the door. Someone in my class said that someone popped a balloon behind a girl and she dropped to the ground, so for a moment we all thought it was an elaborate prank.”

Davis said the school’s principal told students via the loudspeaker there was no immediate threat, but a lockdown was being put in place.

“Even though he said there was no threat we could all tell from his tone of voice something was very wrong,” Davis told BuzzFeed News.

BREAKING: Sheriff confirms to @nbcwashington that two have been injured in the Maryland High School shooting pic.twitter.com/2A5pv5Hx8c

“You train to respond to this and you hope that you never ever have to,” Cameron told NBC Washington. “This is the realization of your worst nightmare — that, in a school, that our children could be attacked. And so as quickly … as that SRO responded and engaged, there’s grievous injuries to two students.”

Cameron added, “Now begins the second phase of this operation and that’s the background and the investigation and the attempt for the school to return to normal, so to speak.” 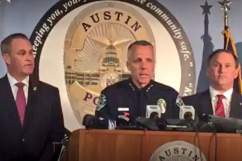 2. The Situation at the School Has Been ‘Contained’ & Students Were Being Taken to Another High School to Be Reunited With Parents

Police at the scene of the Great Mills High School shooting.

St. Mary’s County Public Schools tweeted that the situation is believed to be under control.

There has been a Shooting at Great Mills High School. The school is on lock down the event is contained, the Sheriff's office is on the scene additional information to follow.
Parents/Guardians should go to Leonardtown HS for reunification with GMHS students

There has been an incident at Great Mills High School. Parents please DO NOT respond to the school. Report to Leonardtown High School

“There has been a Shooting at Great Mills High School. The school is on lock down the event is contained, the Sheriff’s office is on the scene additional information to follow,” the school district tweeted. “Parents/Guardians should go to Leonardtown HS for reunification with GMHS students.”

Students will be bused to the other high school for reunification with parents and guardians.

“Students are being evacuated from GMHS and being bused to the reunification center at the Leonardtown HS campus. The building is orderly and the Sheriff’s Office is conducting an investigation. We will continue to update as more information becomes available,” the school district said on Twitter.

3. ATF & FBI Agents Are Responding Along With Local & State Police

School buses line up to take students out of Great Mills High School.

Along with local and state police at the scene, the Bureau of Alcohol, Tobacco, Firearms and Explosives (ATF) and the FBI are sending agents to help with the investigation.

“Our Special Agents are now on scene assisting our St. Mary’s County Sheriff partners with this incident,” ATF Baltimore tweeted.

FBI Baltimore added, “Agents from the FBI in southern MD are on scene assisting @firstsheriff at Great Mills High School in Saint Mary’s County. Evidence Response Team is on standby.”

It is typical for federal authorities to assist in school shooting investigations.

Maryland Governor Larry Hogan tweeted, “We are closely monitoring the situation at Great Mills High School. @MDSP is in touch with local law enforcement and ready to provide support. Our prayers are with students, school personnel, and first responders.”

4. Students at the School Participated in the National School Walkout Day Last Week & Survivors of the Parkland Shooting Have Been Tweeting Support to Them

Students at the school joined thousands of others around the country in a National School Walkout Day last Wednesday on the one-month anniversary of the February 14 shooting at Marjorie Stoneman Douglas High School in Parkland, Florida, that left 17 dead.

Mollie Davis, a student who took part in the walk out and tweeted about the March 19 shooting, said, “I made this video 5 days ago. Now my school is the target. WHY DO WE LET THIS KEEP HAPPENING??? I’m so tired I’m so tired.”

I made this video 5 days ago. Now my school is the target. WHY DO WE LET THIS KEEP HAPPENING??? I’m so tired I’m so tired. https://t.co/sGqqdXy5J0

Survivors of the Parkland shooting, who have led efforts for gun control in the wake of the tragedy there, have been tweeting support to Davis and other Great Mills students.

“We are Here for you, students of Great Mills ? together we can stop this from ever happening again,” Emma Gonzalez tweeted.

Another Parkland survivor, Jaclyn Corin, tweeted, “Less than a WEEK ago Great Mills High School students walked out with us to protest gun violence…now they’re experiencing it for themselves. The state of our country is disgusting – I’m so sorry, Great Mills.”

Adam Alhanti tweeted, “The words School & Shooting should not be next to eachother. Headlines like this should not have to be typed up every week. All of these incidents have one thing in common. My thoughts are with Maryland right now.”

5. About 1,600 Students Attend the St. Mary’s County High School, Where a Threat Was Investigated Last Month

About 1,600 students attend Great Mills High School in St. Mary’s County, according to its website. Its principal is Jake Heibel and the school has about 150 faculty members.

The school is located at 21130 Great Mills Road in Great Mills, Maryland.

A threat was investigated at the school on February 21, according to The Bay Net, a local news site covering Southern Maryland. Concerned parents reported a Snapchat message on February 20 that warned of a possible school shooting.

Heibel sent a note to parents after that incident:

Yesterday we received a report that a student in the hallway during transitions overheard two students mention “shooting” and “school”. We interviewed the student with our SRO, viewed video, interviewed other students, and contacted central office. The threat was not substantiated. Late last night, additional information was circulated quite extensively on social media about a potential threat at school today. Law enforcement was contacted and an investigation was conducted, which included interviews with students and parents to determine the validity of the potential threat. The threat to Great Mills High School has not been validated at this time. However, we will have additional security today and we will continue to investigate the source of the postings. Also, continue your vigilance and alert us to any information you may encounter. If you see something, say something.

Tomorrow, students will have the opportunity to discuss school safety during One Lunch. I am very proud of our students and appreciate their vigilance and willingness to notify adults if they see something that concerns them.

It is not known if anyone was arrested in that incident. Sheriff Tim Cameron said at a press conference they will investigate whether that threat was connected to the shooting.

He said they will determine if “anything on social media was relevant to this day. I’m not aware of anything, but again, we’re going to go back and comb through that, as well as anybody involved, their social media posts.”

Cameron said there is one school resource officer assigned to the high school. Officers rushed to the school when the shooting was reported.

“It was a mass response. This is what we train for, this is what we prepare for and this is what we pray we never have to do,” Cameron said. “And on this day, we realize our worst nightmare. That our greatest asset, our children, were attacked in a bastion of safety and security, one of our schools. Obviously that’s what we’re talking about right now across the country. The notion that it can’t happen here is no longer a notion. Despite training, you hope that you never have to do this, ever. We are a very tight-knit community and so now what I would ask our community to do is pray for those victims and hope that we can return to some type of normalcy in our schools and our community.”

The FBI has set up a number for tips or information about the shooting, 1-800-CALL-FBI, Cameron said. 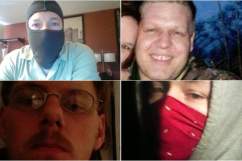 Loading more stories
wpDiscuz
0
0
Would love your thoughts, please comment.x
()
x
| Reply
Two people were injured in a shooting at Great Mills High School in St. Mary's County, Maryland. The shooter, who was a student, is dead.